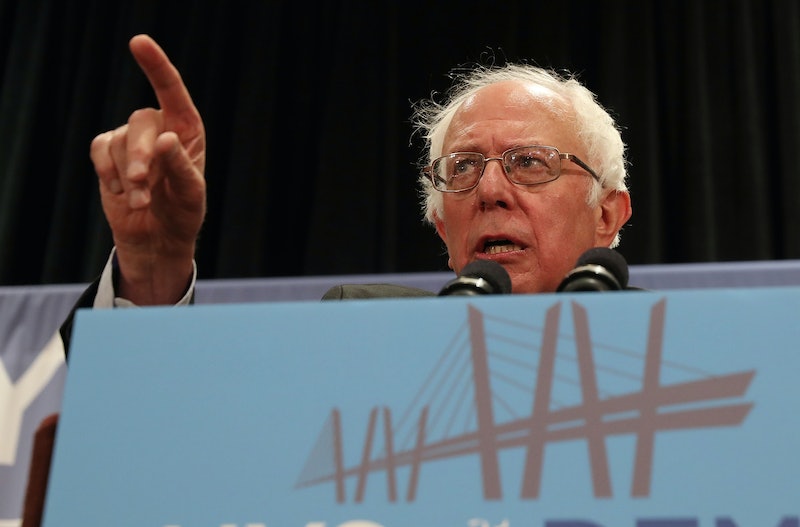 After his colleague Elizabeth Warren was silenced by the Senate on Tuesday night, Bernie Sanders read Coretta Scott King's letter protesting Jeff Sessions to the body on Wednesday morning. Warren had begun reading the letter before the assembled Senate on Tuesday when Senate Majority Leader invoked Senate Rule XIX to force Warren to cede her floor time. The rule states that Senators may not "by any form of words impute to another Senator or to other Senators any conduct or motive unworthy or unbecoming a Senator." Despite the fact that the words were not Warren's own, a party line vote forced her off the floor to the immediate outrage of millions following the situation across the country.

"The idea that a letter,= and a statement made by Coretta Scott King, the widow of Martin Luther King Jr., a letter that she wrote, could not be presented and spoken about here on the floor of the Senate, is to me incomprehensible," Sanders said before reading the letter. "I want the American people to make a decision whether or not we should be able to look at Senator Sessions' record and hear from one of the heroines of the Civil Rights Movement."

Other Senators had actually preceded Sanders in making this act of protest, including Senators Tom Udall, Sherrod Brown, and Jeff Merkley. None of the men were forced to cede their floor time by the enforcement of Rule XIX. That's most likely because Senate Republicans were trying to avoid making a bad situation worse, but it proves a point nonetheless. As Warren was silenced Tuesday night, online commentators remarked that a similar situation had happened about two years ago. Ted Cruz called McConnell himself a liar from the Senate floor, but the rule was not invoked at the time. The idea of a male senator being treated the way Warren was is almost unthinkable, and the Senate reinforced that perceived sexism with its actions on Wednesday.

The fight against Sessions' nomination, as well as the recent twist of Warren's treatment by the Senate, has quickly become a perceived microcosm of the larger issues facing the federal government. The willingness to listen to other perspectives and respond meaningfully to them is disappearing from Congress, and with it, the intended purpose of representative democracy. Without these strongholds, it will be easier for authoritarianism to rise, as it always has in the absence of compassionate, humanistic leadership. The senators protesting are trying to rebuild that kind of government, but for now, it's dependent on how the Republicans respond.