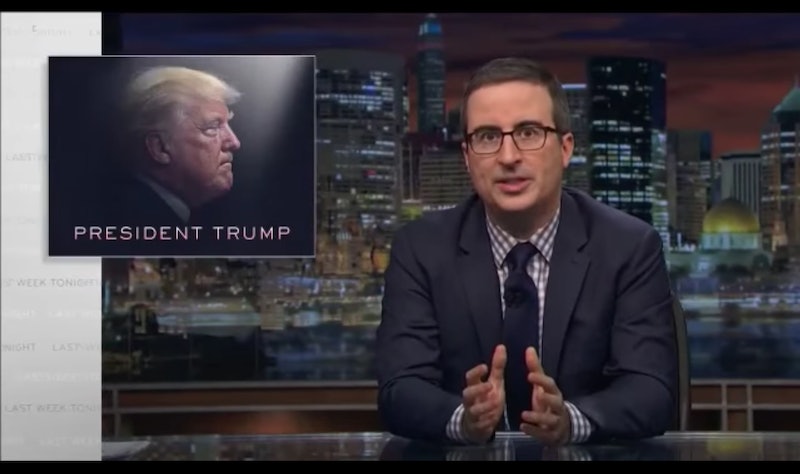 On Sunday's episode of Last Week Tonight, audience members watched as John Oliver blasted Trump's "arming teachers" idea as one that he believes essentially sums up the president "in a nutshell." Oliver did not hold back in his critique of the president, making it very clear that he saw a host of problems with the president's proposals for making schools safer.

During the show, Oliver played a clip of President Trump holding a focus group with survivors as well as friends and relatives of victims of the Parkland shooting. In the clip, Trump asked if anyone liked the idea of arming some teachers in schools as a way of increasing school safety and seeking to prevent future mass shootings. In response, very few people in the room raised their hands. However, when Trump asked if people felt strongly against the idea, quite a few raised their hands to indicate their disagreement.

In reflecting on the clip, Oliver noted that he felt that it epitomized Trump, saying, "That is Donald Trump in a nutshell: proposing a terrible idea in a tone-deaf way then refusing to acknowledge that he just lost the popular vote."

Trump has been advocating for the idea of arming around 20 percent of teachers in the country since the deadly shooting at Marjory Stoneman Douglas High School in Parkland, Florida on Feb. 14. The school shooting killed 17 students and teachers and injured 15. The president has been vocal about his views on arming some educators on Twitter, saying on Feb. 22, " ...If a potential 'sicko shooter' knows that a school has a large number of very weapons talented teachers (and others) who will be instantly shooting, the sicko will NEVER attack that school. Cowards won’t go there...problem solved. Must be offensive, defense alone won’t work!"

On his show, Oliver pointed out that he believes there exist a myriad of problems with Trump's proposition of arming some teachers to deter gun violence. Oliver noted that teachers providing school security does not constitute part of their job duties. He also further commented that there were armed deputies present at Marjory Stoneman Douglas High and that did not prevent the shooting, calling into question whether armed faculty members would do anything to deter future shootings.

Moreover, Oliver also noted that arming 20 percent of teachers nationwide, as Trump had suggested, would result in over 700,000 teachers being armed in the United States. Oliver further pointed out that he believes it is not at all surprising that the National Rifle Association (NRA) supports the notion of arming teachers, saying "Yeah. So it’s no wonder the NRA likes this solution. It involves buying hundreds of thousands of guns, and that’s their solution to everything."

Oliver then briefly reflected on the notion that many of the people who are opposed to arming some teachers are teachers themselves, a notion which a Feb. 25 article in Vox also pointed out. Oliver played a clip of Lily Eskelsen Garcia, the president of the National Education Association, doing an interview on CBS This Morning, in which she expressed serious concerns about putting armed educators in schools. “This does not pass any common-sense test whatsoever ...," Eskelsen Garcia commented.

Oliver concurred with Garcia and then proceed to mock Trump by imitating a teacher trying to teach their student a lesson:

She’s right, and she’s using the patient, exasperated tone of a teacher explaining something to the dumbest student in her class—which, in a way, she is ... Donald, your answer doesn’t make sense. Also, we don’t actually want ‘less’ guns in schools, we want ‘fewer’ guns in schools. Donald…Focus, Donald…One, two, three all eyes on me!

Overall, Oliver clearly did not mince words when it came to revealing his thoughts on Trump's idea to arm some teachers as a way to enhance school safety. Many will likely closely be watching to see if the president continues to advocate for this notion or if he will take some of the criticism from Oliver and others into account when determining next steps in regards to school safety and gun control.

More like this
How The City Healed Five Years On From The Manchester Arena Attack
By Ella Glover
Harry Styles Called For "Backlash" In Powerful Statement On Abortion Rights
By El Hunt
10 Times Boris Johnson Got It Wrong On Trans Rights
By El Hunt and Sam Ramsden
Yes, Billboard Queen Angelyne Really Ran For Governor Of California
By Brad Witter
Get Even More From Bustle — Sign Up For The Newsletter