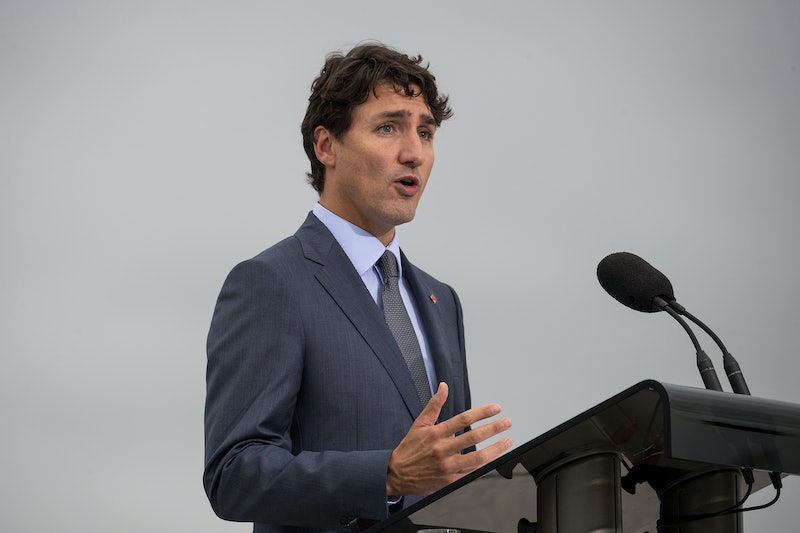 On Tuesday while speaking in the Canadian House of Commons, prime minister Justin Trudeau formally apologized to the Canadian LGBT community for historical discrimination in the country.

While shedding light on systemic prejudice against LGBT members during the Cold War, Trudeau discussed the country's history of relegating gay and lesbian Canadians to the margins of society by kicking them out of their government and military professions. Trudeau described the expulsion of the marginalized community from their jobs as "nothing short of a witch-hunt." Addressing his audience in the House of Commons, Trudeau said:

Today we acknowledge an often overlooked part of Canada's history. Today we finally talk about Canada's role in the systemic oppression, criminalization, and violence against the lesbian, gay, bisexual, transgender, queer, and two spirit communities.

It is with shame and sorrow and deep regret for the things we have done that I stand here today and say: We were wrong. We apologize. I am sorry. We are sorry.

According to CBC News, Cold War anti-LGBT measures against gay and lesbian members of the government and military often took terrifying and bizarre forms. The authors of Whose National Security?: Canadian State Surveillance and the Creation of Enemies wrote about one test that was meant to "detect" homosexuality. The test was introduced by Frank Robert Wake, a Carleton University psychology professor, and in 2016, the Ottawa Sun reported that the university administration apologized for its inadvertent role in homophobia.

The scrutiny against Canadian LGBT members came to an official end in 1992 when former military member Michelle Douglas sued the Canadian Department of National Defence. Douglas, a lesbian, later on became the head of the Foundation for Equal Families, an organization centered on LGBT civil rights. An official recognition of LGBT rights abuse from the government was long overdue, according to some ex-military LGBT community members.

With Trudeau's apology, Canada has officially joined other countries like Germany, Australia, and the United Kingdom in broadscale and official governmental acknowledgments of anti-LGBT transgressions.

While speaking of the Canadians who were "branded criminals by the government" along with those "people who lost their livelihoods, and in some cases, their lives," Trudeau said, "These aren't distant practices of governments long forgotten. These happened systematically in Canada with a timeline more recent than any of us would like to admit."

The Canadian prime minister also discussed the colonial history of Canada and the effects of colonialism on indigenous cultures. Trudeau said, "When they came to this land, European colonists brought with them their foreign standards about good and bad, about acceptable and unacceptable behaviors, [and] about appropriate and inappropriate partners. They brought with them rigid gender norms, norms that led to homophobia and transphobia."

"These norms led to the near destruction of LGBT identities and two spirit indigenous identities. People whose identity who had once been venerated, were now filled with shame because of the people they were. They were rejected and subjected to violence," Trudeau added.

In his statement to the Canadian LGBT community, Trudeau said that the ultimate goal of officially recognizing Canada's grim past was to usher in an era of "healing" for minorities. "It is my hope that in talking about these injustices, in vowing to never repeat them, and acting to right these wrongs, we can begin to heal," Trudeau said. A French translation for the Canadian premier's speech was also provided to the House of Commons.

In similar fashion to Tuesday's apology, Trudeau apologized for the Komagata Maru incident of 1916 during a speech in 2016. The incident refers to the time when Canada rejected entry for Sikh, Hindu, and Muslim migrants fleeing violence in the turbulent subcontinent.

More like this
How To Fight For Reproductive Rights, Based On How Much Time You Have
By Courtney Young
Twitter Was Saying The Same Thing About Sam Ryder’s Surprising Eurovision Result
By El Hunt
Manchester Arena Attack 5 Year Anniversary
By Ella Glover
Rebekah Vardy & Coleen Rooney’s Trial Has Officially Begun
By Bustle UK
Get Even More From Bustle — Sign Up For The Newsletter