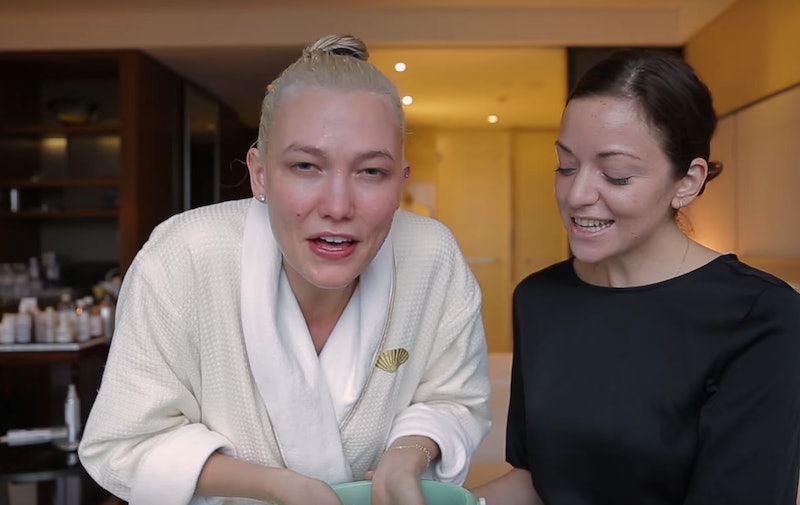 After seeing sneak peeks of outfits and winged try-ons, the big day has finally arrived. You'll be able to see all the angelic models walk the Victoria's Secret runway in over-the-top lingerie surrounded by great music on the Nov. 28 television broadcast. But what you won't see is how the models prepare for the 2017 Victoria's Secret Fashion Show. Luckily, Karlie Kloss is taking her fans behind the scenes — and her prep involves dunking her head into ice water. After you're done watching, you'll want to do the same thing.

The Victoria's Secret Fashion Show is a major event every year. Models from all over the world get together to walk the runway wearing extravagant lingerie while major celeb musicians perform. Naturally, that leads to people wanting to know how the ever-admired Angels get ready for the event. And Kloss isn't keeping her routine a secret.

The model teamed up with facialist and skin care expert Georgia Louis to show you exactly how she prepped her skin for the big day. The six minute video shows the model's routine just 10 minutes before she has to be in the lobby to go to the show. It's the real deal.

It all starts with the model dunking her head into a bucket of ice water for 20 seconds. According to Louise, it's a cold cleanse to wake the skin and substitute for a traditional cleanse. Not exactly as relaxing as a morning coffee, but apparently just as effective.

After that, the pair mask and massage their face. They take a cream mask, rub in together in their hands, and then massage it into their face. Louise says that a mask can be even more effective than a morning cleanse, so you might want to stock up on your morning masks.

The massage also helps lift and de-puff skin, according to the video. The pair massages the mask onto their forehead, around the bridge of the nose, and along the jaw line. This isn't just good for big mornings either. As a 22-year skin care veteran, Louis recommends doing this every morning to wake the skin.

As Kloss mentions, it's also important to do the routine on days that you will be wearing a lot of makeup. Without a great base, you can get great makeup. The entire process only takes about 10 minutes, but your skin will thank you all day long.

After that, it's all about hydrating the skin. Louise recommends prepping face with a serum rather than a cream product to have your makeup stick better. She applies the serum to her face using the Swedish technique tapotement, which is basically just moving your fingertips quickly over the skin to boost stimulation and circulation.

The final step is to take freeze special metal facial tools or frozen spoons to further depuff the skin. Louise runs the utensils around and over the eye socket to get firm, smooth eyes for the big event. Kloss admits to doing this on more than one occasion herself ,and says that the frozen spoon work just as effectively.

And that's it. The entire routine takes mere minutes to do, which is as long as it take for you to make coffee and wait for it to cool to a drinkable temperature. It doesn't get much easier than this.

Considering that Kloss walked the 2017 VS runway looking absolutely fabulous, I'd say that these skin tips are a sure winner. Whether you're looking to add this in daily or just for a big event, you really can't go wrong.

After all, you probably already have everything you need sitting in your bathroom (and kitchen) cabinet.