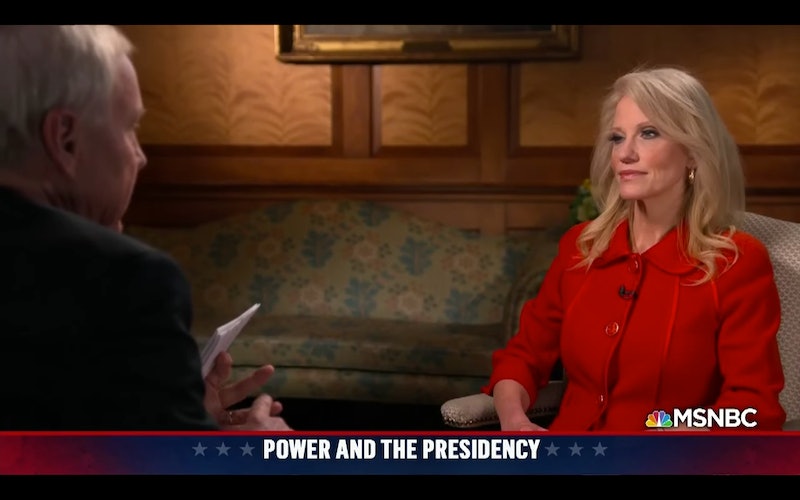 It's official. Even the Trump administration might know that the travel ban is indefensible. How did I jump to that conclusion? Well, Kellyanne Conway explained the "Bowling Green massacre," which never happened, in order to defend the ban.

Maybe Conway will brush off the fabrication as an alternative fact — they are her specialty, after all. Or maybe she'll blame it on Chris Matthews, whose show she was on, saying that she was testing him and asking why he didn't react. Maybe she won't respond to the uproar at all, and the Bowling Green massacre memes will just keep flowing in. However she defends herself — or doesn't, as this administration has been rather shameless with their downright questionable claims — the fact remains. Conway used a made-up massacre on national television as part of an argument that the refugee ban should stay in place. I'll say it one more time, although I have a feeling that it won't be for the last time: This is unprecedented. This is ridiculous. There was no Bowling Green massacre, and therefore it cannot be used as a reason to ban refugees from those seven countries from entering the United States.

Let's clear up the confusion, shall we? Conway actually said that she thought it was "brand new information to people that President Obama had a six-month ban on the Iraqi refugee program after two Iraqis came here to this country, were radicalized and they were the masterminds behind the Bowling Green massacre." This is based loosely on something that really did happen, but not exactly how Conway implied.

In 2011, two Iraqi men living in Bowling Green, Kentucky, were arrested and sent to federal prison after they were caught and eventually admitted to trying to send money and weapons to al Qaeda in Iraq. These two men had already been part of attacks on American soldiers in Iraq, suggesting that their radicalization happened prior to their move to the United States. Obama did not institute a ban on Iraqi refugees after the arrest, although immigration from that country did slow down as its citizens were being subjected to more intense background checks. Finally, and most importantly, the two men never carried out an attack on American soil, in Bowling Green or anywhere else.

“Most people don’t know that because it didn’t get covered," Conway said, finishing her lurid tale.

That's right, it never got covered. If you're going to traffic in the world of alternative facts and made-up massacres, then you might want to get used to the way they just never seem to find their way into the papers.