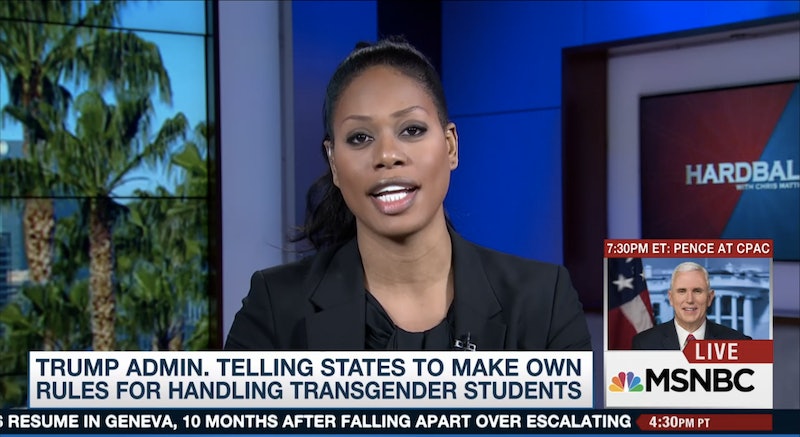 Issues of equality and identity that seemed at the very least headed in the right direction last year — even if progress was slower than advocates would have liked — have now been hurled back into the realm of caustic cable news debates. At the moment, there's no better representation of this than the matter of rights and protections for transgender Americans. So: You should watch this anti-trans advocate dodge answering which bathroom Laverne Cox should. Consider that, for an anti-trans rights activist, it ought to be a pretty simple question to answer. That he finds it so difficult ends up making clear how baseless transphobic "advocacy" is.

The moment unfolded on Thursday night's episode of MSNBC's Hardball, hosted by Chris Matthews. On one side was Cox, the award-winning actor and transgender rights activist who shot into the national consciousness via her role on Netflix's Orange is the New Black. On the other was Travis Weber, the director of the Family Research Council's Center for Religious Liberty, and an opponent of transgender people being able to use the correct bathrooms for their gender identities.

To start with, Matthews interviewed Cox about her experience of the issue, asking why she believed Trump would allow transgender protections to be rolled back — despite his fleeting comments during the campaign suggesting he was fine with transgender people using the correct bathrooms for them.

Cox replied that the LGBT community understood full well that other high-profile names in the administration, such as Vice President Mike Pence and Attorney General Jeff Sessions, were hostile to LGBT rights.

I think everyone in the LGBT community understood that the vice president, that the current attorney general, are people who've been very anti-LGBT. And so, this is not surprising considering the administration. ... At the end of the day, we have to highlight the humanity of trans people, and lift up trans people's stories. It's been very frustrating for me to watch commentary about this without actual trans people being present, which is why I wanted to be here today, to add trans voices to the conversation.

Matthews then asked Cox how her decision about which bathroom to use in public places (Matthews cited La Guardia airport as an example) had been impacted by the shift from the Obama to Trump administrations. C

ox replied that the politicization of trans bathroom access really isn't about bathrooms, but about whether trans people have a "right to exist in public space."

My friend Chase Strangio who works at the ACLU says this so brilliantly, that these anti-trans bathroom bills are not really about bathrooms, they're about whether or not we want and believe that trans people have a right to exist in public space. When trans people can't access public bathrooms, we can't go to schools effectively, go to work effectively, access healthcare facilities. It's about us existing in public space. And those who oppose trans people having access to the facilities that are consistent with how we identify know that all the things that they claim don't actually happen. It's really about us not existing, about erasing trans people.

Cox laid out a clear, concise description of precisely what she thinks of these laws. The task for Weber was to counter the point Cox made, and lay out his own case for which bathroom she should use, and why. That is, if it really is about the safety and ethics of different people's bathroom access, as countless anti-trans voices proclaim.

Matthews asked Weber point-blank which bathroom Cox should use if she were at an airport. His non-answer, addressing only the "state's rights" angle, said it all.

So, Chris, we want to be sure to make sure that localities and school districts have the ability to decide this question for what's best for them. We've got to be clear here about ... what we have here is a question of the federal government taking away power from localities. President Trump is saying the federal government should not mandate that.

Matthews tried again, practically pleading for a straight answer. "You care about this issue," he said. "What restroom should she use?"

So, it depends where I'm at, if I'm in a school district where it's not an issue...

Things got a little testy here, as Weber suggested that Matthews was afraid to hear his answer. "Hardly," Matthews replied. "The way we do these programs is they're called interview programs, and I interview people, and when you come on this show you answer the question."

Weber responded in much the same way he did before, entirely ducking the question of which bathroom he believed Cox should use, and instead arguing it should be a matter for individual school districts and localities to decide.

He did eventually get around to claiming trans bathroom rights posed a harm to cisgender people, although he didn't really explain why, beyond a vague appeal to traditional norms ― he stated that it would be clearly harmful for a 14-year-old girl to share a locker room with somebody with "male genitalia," which led to a firm rebuke from Cox.

I think it's important when we have conversations with and about transgender people, that we do not reduce us to body parts. We are more than the sum of our parts. And it's so deeply objectifying and dehumanizing to talk about trans people and reduce us to body parts. That is really disturbing. We need to look at the evidence, we need to look at the hundreds of localities all over the country that have public accommodations protections, that's really what we're talking about, for trans people. And everything that he's claiming happens actually doesn't happen. Instead trans people feel they have a right to exist in society.

As Rich Juzwiak noted for Jezebel, this wasn't even the first time Weber tangled with Matthews, either. He appeared on a May 2016 episode of Hardball discussing the exact same issue, and failed over and over again to give a straight answer to the exact same question, albeit about transgender rights activist Jenny Boylan rather than Cox. In that interview, however, he finally gave a straight answer, saying "they can use the bathroom of their biological sex." This week, however, he was apparently not so brave.