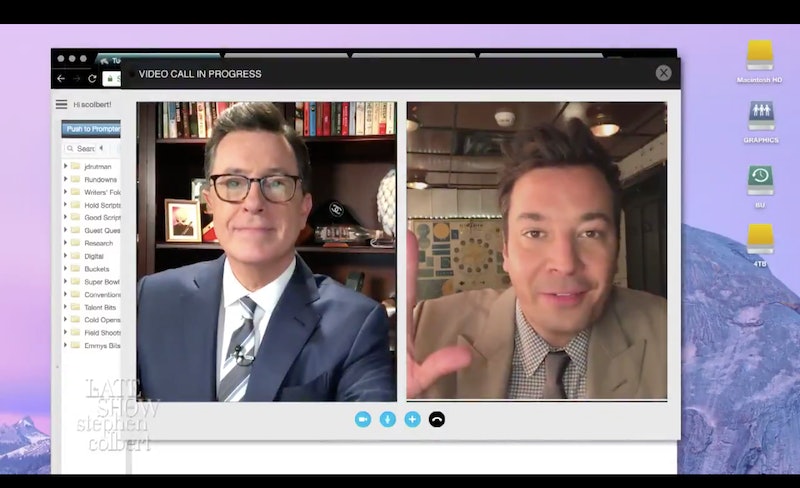 The Late Show with Stephen Colbert/CBS
By Sarah Friedmann
June 27, 2018

During a rally in South Carolina on Monday, President Donald Trump had some harsh words for a couple late night television hosts. While speaking to a crowd at a campaign event for Governor Henry McMaster, Trump called one host a "low life" and another a "lost soul." In response, the hosts created a short video trolling the president. Indeed, you can watch Stephen Colbert and Jimmy Fallon gang up on Trump via a clip featured on both Colbert's The Late Show and Fallon's The Tonight Show.

The clip opens with Colbert typing at a computer, seemingly trying to come up with a joke about President Trump for his monologue. Colbert then receives a video call, which he answers. The caller is Fallon, who greets Colbert with a "Hey low life." Colbert replies, "Hey lost soul." The duo's greetings for each other employed the phrases Trump used to describe each of them at Monday's rally. In the video, Colbert then asks Fallon what he's up to and encourages him to "be a man," referencing a tweet from earlier this week in which Trump criticized Fallon and instructed him to "Be a man Jimmy!"

As the video proceeds, Fallon asks Colbert what he is working on and Colbert simply jokes, "Oh I'm busy having no talent." Colbert's reference was another direct hit at Trump, who claimed at Monday's rally that "This guy on CBS [Colbert] has no talent.”

Fallon then indicates he had heard about Trump's rally, saying "I heard he said some pretty bad stuff about us ... I heard he said we're all no talent, low life, lost souls." Colbert jokingly appears shocked by Fallon's assertion, replying, "Well, that's not right, that's Conan."

TBS' late night host Conan O'Brien then joins the call, appearing to be in the middle of shaving and seemingly not-up-to date on current events. O'Brien facetiously appears shocked by the news that Trump is president, saying, "Donald Trump. The real estate guy who sells steaks? He's president? Wow." O'Brien also warns Colbert and Fallon to "be civil" saying, "if we're not careful, this thing could start to get ugly."

The Late Show's version of the clip then closes with a preview of Colbert's forthcoming show, with a narrator saying "It's the late show with the guy on CBS," employing Trump's apparent moniker for Colbert as opposed to using his name. The narrator wrapped up her announcement by exclaiming, "And now, live on tape from the Edward Sullivan theater in New York City, it's the guy!"

While Colbert and Fallon referenced some of the president's cutting words for them at the rally, Trump's full comments reveal even further critiques of the duo. During Monday's rally, Trump first commented on Fallon, who has recently again stated that he regrets a 2016 interview with Trump in which he playfully messed up the now-president's hair. Regarding Fallon, Trump said to the audience:

Did you see Jimmy Fallon? ... The guy screws up my hair, going back and forth. He was so disappointed to find out it was real. He couldn’t believe it. So Jimmy Fallon apologized. He apologized for humanizing me. The poor guy, because now, he’s going to lose all of us ...

Later on in his speech, Trump called Fallon a "nice guy" but also added that "he's lost, he's like a lost soul." Trump also noted that Fallon should be "thankful" that Trump was on his show.

Trump also had fairly extensive critiques for Colbert — even though the president never directly used the late night host's name. As Trump put it:

The guy on CBS is ... what a low life. I mean, honestly, are these people funny? And I can laugh at myself ... but there's no talent, they're not like talented people. Johnny Carson was talented ... I mean, this guy on CBS has no talent.

In addition to Fallon and Colbert, Trump also took a swipe at late night host Jimmy Kimmel during his speech, saying of Kimmel, "that guy’s terrible."

Overall, it's clear that Trump's critique of late night hosts sparked a subtle but strong response from Colbert and Fallon in the form of a joint trolling video clip. Considering the president's penchant for commenting on the late night hosts' material, many will likely be watching to see whether or not Trump weighs in on Fallon and Colbert's latest endeavor.