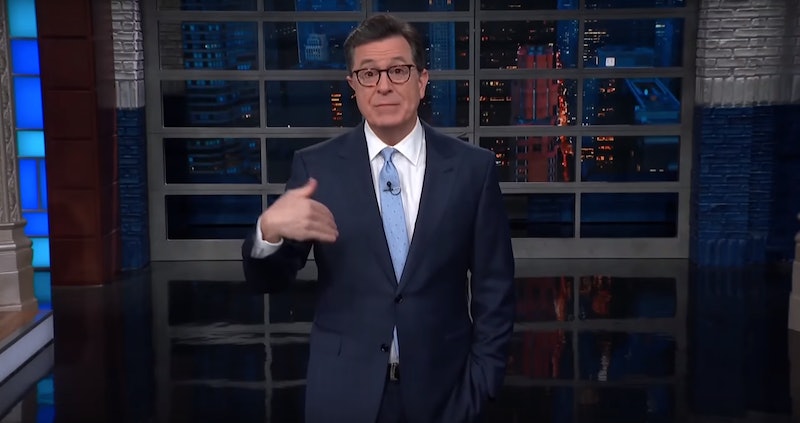 The Late Show with Stephen Colbert
By Sarah Friedmann
March 6, 2018

Nunberg reportedly chose to make so many appearances on television as a means of protesting Mueller's subpoena. According to the Washington Post, throughout his interviews, Mueller repeatedly threatened to defy the subpoena, claiming that the requests made in it were too onerous. “ … What they sent me was absolutely ridiculous,” Nunberg said to MSNBC’s Katy Tur during one of his many appearances on Monday. “They wanted every e-mail that I had with Roger Stone and Steve Bannon. Why should I hand them e-mails from November 1, 2015? ... ” However, as reported by Time, Nunberg eventually took a softer stance, saying in an interview with the Associated Press later on Monday that he is " going to end up cooperating with them [the special counsel]."

Nunberg's commitment to cooperation came after The Late Show aired. Thus, during the show, Colbert fully took the former Trump aid to task for frantically appearing on a myriad of cable news shows. The host opened his show by noting that he had to scrap a monologue on trade tariffs that he had previously prepared because, right before he taped the show, the entire news cycle flipped.

Colbert then proceeded to make joke after joke about Nunberg's flurry of appearances, during some of which the former Trump aid heavily criticized the president and also seemed to even recognize the apparent absurdity of his behavior. At one point, Colbert played a clip of Nunberg on the phone with MSNBC's Katy Tur, during which the former aid stated, "If I could tell you once again, Katy, Donald Trump being involved in conservative politics is not good for his business. By the way, I think my lawyer's gonna dump me right now."

Colbert then retorted, "Sam, I think your dentist is going to dump you right now," prompting massive fits of laughter from the audience. The late night host then compared Nunberg's frantic appearances to coverage of a car chase, saying:

Nunberg took over cable news like a car chase. He was on MSNBC at 2:45, CNN at 3:30 and CNN again at 4:00. I believe at 5:00 he called in HGTV to incriminate himself on Flip or Flop. I'm pretty sure after Mueller gets though with him, it's gonna be "flip."

Colbert also mocked one of Nunberg's defiant assertions on CNN, in which he claimed that he'd be willing to get arrested for not complying with the subpoena. On the phone with the CNN's Jake Tapper, Nunberg insisted, "I'm not cooperating, arrest me." Colbert responded by pointing on the obvious, saying, "You know, Mueller can arrest you, right?" The host also used a comparison to further drive home his point, noting, “... That’s like saying ‘eat me’ to Hannibal Lecter — it doesn’t work out well. It doesn’t have a happy ending for you. He’s just going to marinate you.”

Colbert then closed his monologue by pointing out that Nunberg should probably take Tapper's advice when it comes to cooperating with Mueller. In responding to Nunberg's complaints about the prosecutor's requests while on-air on Monday, Tapper noted:

Sometimes life and special prosecutors are not fair, I guess. I would cooperate, were it me. But, you know, I'm a different breed of cat.

Colbert then lightly mocked Tapper's response, saying, "Yeah baby doll, Jake Tapper's a different breed of cat. You've got to get hip to his vibe ..."

Overall, Colbert absolutely eviscerated Nunberg for his whirlwind of cable news appearances, with the host almost relaying the information in disbelief at times because of the boldness of some of Nunberg's comments. While Nunberg has now reportedly agreed to cooperate with Mueller, his defiant cable news appearances before that point certainly made for some entertaining late night fodder.