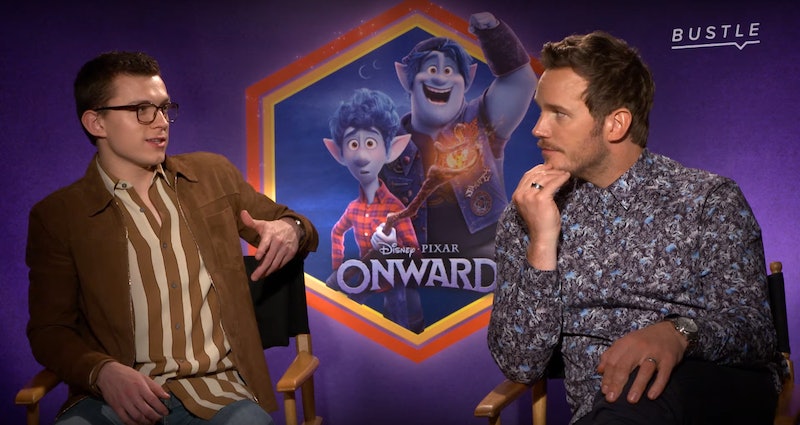 Would you rather have scales or fur? Hear the thoughts of your pets or your significant other? Chris Pratt, Tom Holland, and the team behind Pixar's latest film face these and other tough theoretical choices in a new Bustle original video, where you can watch the Onward cast play a rousing game of "Would You Rather."

Onward takes place in a world where magic has become mundane. Elfin Lightfoot brothers Barley (Pratt) and Ian (Holland) live in a suburban neighborhood, go to school, watch TV, and shoo unicorns away from eating their garbage. But on his 16th birthday, Ian gets a magical staff belonging to his father, who died before he was born. It comes with a spell to bring his dad back for just 24 hours, but when things go awry, Ian’s older, fantasy-game loving brother Barley (Pratt) takes it as a cue for a quest. The game of "Would You Rather" we played with the cast has the same mix of the magical and the everyday. We asked the cast both about fighting dragons and dealing with relatives.

For the film's director Dan Scanlon and producer Kori Rae, they'd pick fantasy danger over real life trouble in an instant. "Oh, dragon, any day," says Rae, when asked if she’d rather get in a fight with a dragon or a relative online. Put to the same question, Pratt admitted, “Neither is great." whereas Holland had some followup questions. "What if the dragon was only that big? They didn't say it was a big dragon!”

Another tough question: would you rather hear your pet's thoughts or your significant other's? After some deliberation both Holland Pratt found a perfect workaround. "I invite both my pets and my significant other to share their thoughts with me," says Pratt.

Pratt and Holland have the same energetic dynamic playing "Would You Rather" that they do onscreen as the Lightfoot brothers. In both, they work together to overcome imperfect situations and roll with changes as they come up.