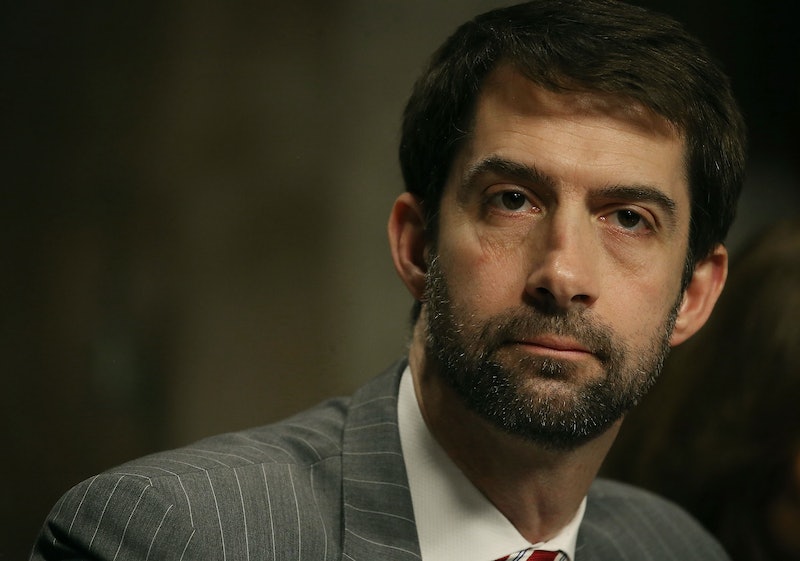 With attendance numbers reaching 2,000, Tom Cotton's town hall audience demanded answers and accountability from the Arkansas senator on Wednesday evening on topics including the Affordable Care Act, immigrants and refugees, education, and much more.

Cotton, the junior senator from Arkansas, held the town hall to meet with constituents and answer their questions. Like many recent town hall events hosted by Republican elected officials, Cotton received a great deal of criticism for his support of the Trump administration.

The town hall lasted nearly two hours and was live streamed on YouTube by Springdale Public Schools, the venue hosting the event. The hashtag "CottonTownHall" started quickly trending on Twitter during the streaming and many tweets expressed support for the audience's very concerted efforts to hold Cotton accountable with their questions.

The town hall had many stand-out moments. On woman asked who in the audience had been affected by the Affordable Care Act and hundreds stood in solidarity. She then went on to say that she had a long-standing pre-existing condition, and questioned whether Cotton would support maintaining the pre-existing condition protections established under Obamacare. When Cotton proceeded to seemingly dodge her question, the crowd booed and shouted "do your job." Eventually, Cotton offered a response to the woman's question, though did not offer any details as to how he will ensure those with pre-existing conditions receive insurance coverage.

Another woman felt it important to share with Cotton and the crowd that she was not paid to be in the audience, directly countering the Trump administration's claim that many protestors are paid or "professional anarchists." When the woman announced "I'm Mary from Fayetteville and I am not a paid protestor," the crowd erupted in thunderous applause.

Twitter users have also become particularly enamored with a 7-year-old boy, Toby, whose comments closed the town hall meeting. Toby expressed concern regarding why the Trump administration wants to build a wall between the Mexico-U.S. border and also wondered why Trump wants to cut funding for PBS children's programs, particularly if the funds are used to pay for a wall. In his response, Cotton characterized America as a "melting pot" but also stressed the importance of building a wall to protect Americans.

These are just a few of the many moments during the two-hour-long town hall meeting where the crowd stood steadfast in ensuring that their concerns were heard and in seeking to make sure that Cotton did not dodge responses to questions. The entire video is certainly worth watching for inspiration in activism.

The audience at Cotton's town hall offered a striking example of democracy in action as constituents held their elected leader accountable. Hopefully Cotton will take to heart the concerns he heard on Wednesday evening and very much factor them into his future policy decisions.