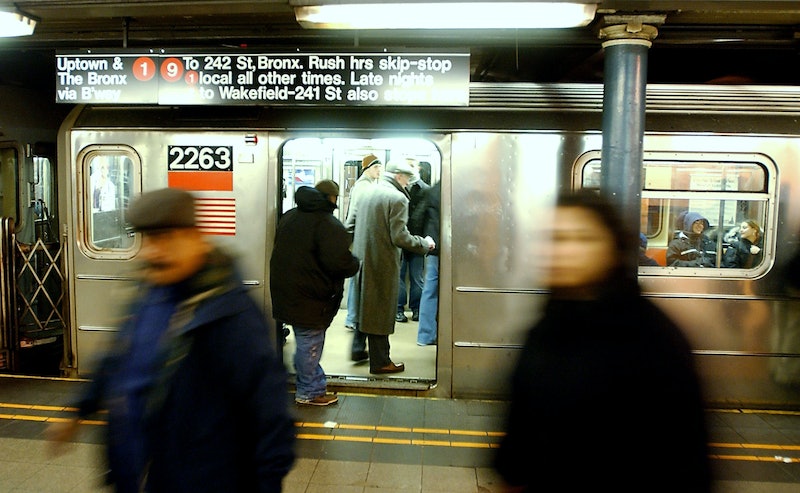 Have you ever heard a stranger being a jerk to someone and not known what to do? Even worse, was that stranger being a jerk using racist and/or xenophobic rhetoric? Next time you find yourself as a bystander in such a situation wondering if you should step in, remember this video of a young woman speaking up to defend a Muslim couple being berated on the NYC subway, as the Washington Post reported.

In the now-viral cellphone video, 23-year-old Tracey Tong, who is of Peruvian and Chinese descent, steps in to calmly confront a passenger who had been harassing the couple. The woman doing the harassing can be heard in the video telling the couple, "Why are you here? Why are you in this country? You're not with us." Another passenger to her left asks her to stop, to which the woman replies "You're not from here."

At that point, Tong enters the conversation and asks the woman where she is from. From there, Tong continues, speaking in Spanish and English, asking her to treat the couple with respect. "We're here in it together," Tong says in the video. "Whether we like what's going on in the government or not, fuck it, we gotta deal with it. You're a grown woman." Tong tries to reason with the woman for almost three minutes, not backing down.

The woman who had originally been aggressive seems to begrudgingly shut up after a while, effectively "losing" the situation. But she may have been even more begrudging after spotting the video showing the back of her head spreading across the internet and even on television. After the video went viral, Univision identified Tong and interviewed her on the air. She told the network that she could not keep quiet when she saw what was happening.

The video is being widely shared in a time when hate crimes, fueled by Islamophobia, xenophobia, and antisemitism, are spiking in the U.S. Meanwhile, the constitutionality of Trump's newly revised travel ban is headed for a court battle. So it's no wonder the video is striking a chord with so many people. In this exchange, Tong illustrated what solidarity and allyship in action looks like. And it's significant that it's a woman of color, a Latina woman, being celebrated as an example. Sometimes it seems that too often the work of speaking up for marginalized people in situations like these falls on other marginalized people.

Solidarity and allyship comes in many forms, and certain situations simply are unsafe for some people to take part in. But if you find yourself in a time and place when you can use your privileges and advantages for good, why not act? Tong gave you an example to build on.