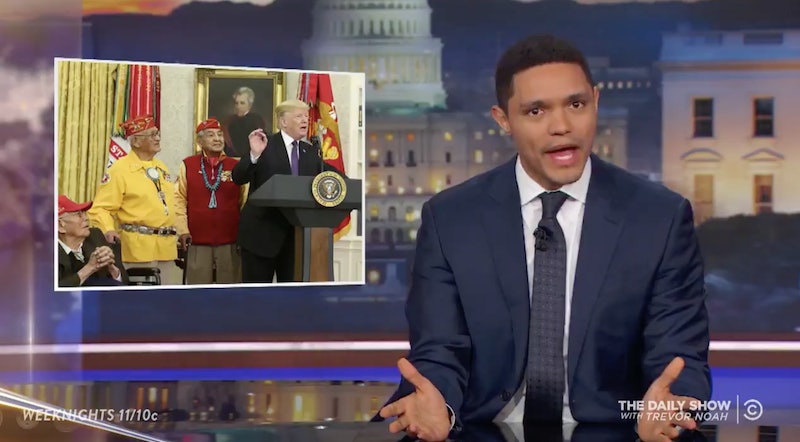 The Daily Show With Trevor Noah
By Sarah Friedmann
November 28, 2017

On Monday's episode of The Daily Show, host Trevor Noah marveled that Trump somehow made Native American relations "worse," after referring to Senator Elizabeth Warren of Massachusetts as “Pocahontas.” Trump's reference came across as derogatory to many and people have accused him of using the name as a racial slur. However, Trump, via his press secretary, has asserted that there was nothing "offensive" about his remarks. Press Secretary Sarah Huckabee Sanders also suggested that saying Pocahontas is a racial slur is "ridiculous."

Trump's remarks about Senator Warren came during a ceremony to honor honor the Navajo Code Talkers, bilingual Navajo speakers who were recruited by the U.S. marines during World War II. While speaking during the event, Trump remarked to the veterans, "You were here long before any of us were here. Although we have a representative in Congress who they say was here a long time ago. They call her Pocahontas." Trump has long-used the name "Pocahontas" to derogatorily refer to Senator Warren, whom he has accused of lying about her native American heritage.

On his show, Noah opened his segment about Trump with a joke, mocking him for further damaging the United States' relationship with Native Americans:

Today President Trump met with Native American World War II heroes and he met with them to apologize for America's history and the way that it has treated ... No I'm just messing with you ... He made it worse.

Noah then played the above-described clip of Trump speaking at the ceremony honoring the Navajo coders and referring to Warren as "Pocahontas."

Of the clip, Noah joked that the president should at least be given credit for being able to differentiate between Native Americans and Indians when making what many perceive to be racist remarks. As Noah put it, "Now, I know your first instinct is to be disgusted. But we have to give credit to the president. Because at least he did the right racism. He could have easily mixed up his Indians."

Noah then commented on the irony of the decor in the space chosen for the ceremony. As the late night host pointed out, while Trump spoke, there was a large picture of Andrew Jackson hanging on the wall behind him. Jackson, who advocated for and implemented forced removals of Native Americans from their land during the 1800s, was by no means an advocate for indigenous people's rights. Noah addressed the irony of having Jackson's portrait hanging during the ceremony, saying,

And as if it couldn’t be worse, right behind him, there’s a picture of Andrew Jackson ... Yeah, that’s like inviting the American flag over to your house and having a picture of Colin Kaepernick on the wall. It’s bad hosting, that’s what it is.

In addition to Noah, many others were highly critical of Trump's remarks during the ceremony as well. John Norwood, the general secretary for the Alliance of Colonial Era Tribes, took Trump to task for his Pocahontas reference, telling NBC News that Trump's comment “smacks of racism” and that the president should “stop using our historical people of significance as a racial slur against one of his opponents.”

Warren herself also responded to Trump's comment, saying on CNN that she "really couldn't believe" that Trump had made the remark. Warren added, "There he was, at a ceremony to honor Native Americans, men who have really put it all on the line to save American lives, to save lives of people, our allies, during World War II, really amazing people. And President Trump couldn't even make it through a ceremony to honor these men without throwing in a racial slur."

Others also echoed Noah's sentiments about the placement of the Andrew Jackson portrait during the Navajo ceremony. Gyasi Ross, a member of the Blackfeet Nation tribe interviewed by the Washington Post, noted that he believed the portrait constituted an intentionally-orchestrated act, saying, “It’s an incredibly distasteful wink in front of people who have sacrificed so much ... Donald Trump is not a stupid man. He understands visuals and optics: his background is in television. So all of that stuff, I believe, is very deliberate."

Overall, it is clear that Noah, along with many others, found Trump's remarks about Warren, as well as the overall optics of the code speaker honoring ceremony, to be highly problematic. You have to wonder if Trump will comment further on the issue after receiving such extensive criticism — or if he will refuse to address the topic.