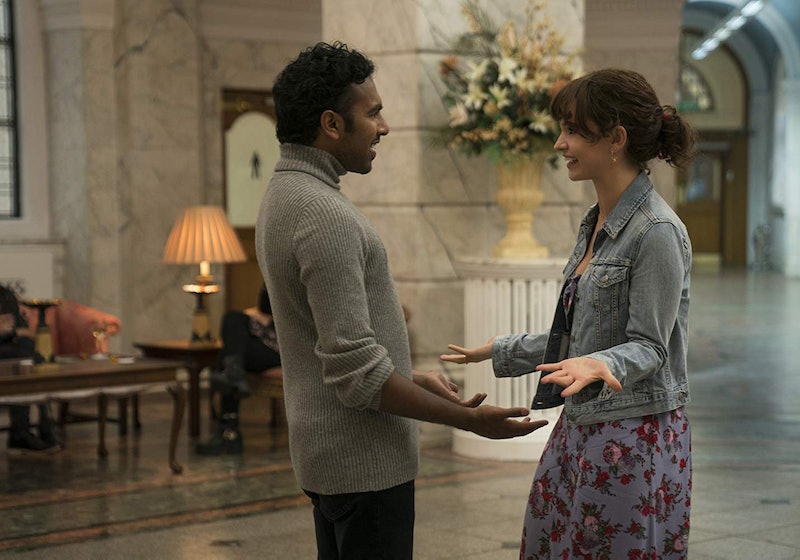 Yesterday, which premieres in theaters on June 28, imagines a world wherein The Beatles never existed. Everyone that aspiring singer-songwriter Jack Malik (Himesh Patel) knows — including his best friend and part-time manager Ellie Appleton (Lily James) — seems to have forgotten the group who wrote and performed some of the most incredible songs in pop music history, but he does. So he decides to use this to his advantage, rising to superstardom performing and recording the songs that only he recalls. The film is a Beatles bonanza and naturally features many new versions of the band's music. In this exclusive clip of Yesterday, Jack and Ellie tackle "I Want to Hold Your Hand" and "When I Saw Her Standing There," and their enthusiasm will have you singing along.

The clip is from early in Jack's rise, as he's working in a small, makeshift recording studio right next to some noisy railroad tracks. Both Ellie and small-town producer Gavin (Alexander Arnold) dance to the songs, as well as help Jack out with sound effects — clapping with dishwashing gloves on, and playing basic classroom instruments.

And though James — who is known to have a great singing voice as seen in her roles in Cinderella and Mamma Mia 2 — doesn't really get to sing much in the film, she does get a chance to harmonize as the backup vocals in this particular part of the film. You may not hear her voice as dominantly as Patel's, but you can see and hear her having a good time jamming to The Beatles, though of course, she doesn't realize that's what she's doing.

Other songs featured in the film are "Yesterday" (of course), "Hey Jude," "Let It Be," "A Hard Day's Night," "With A Little Help From My Friends," "Back In The USSR," and more. So, be warned: if you're a Beatles fan, it's definitely going to be quite a challenge to keep quiet in your seat if you plan on going to theaters to watch the film with other people. You'll just have to try — unless everyone else happens to break into song.

In addition to all the classic music, Yesterday also boasts a romantic comedy element. Part of the process of claiming The Beatles' songs for himself without any information about them on the Internet means that Jack has to recall all the lyrics by memory, which proves to be more difficult than he thought. The film also stars Saturday Night Live's Kate McKinnon who plays Jack's big-time Hollywood manager, and real-life singer-songwriter Ed Sheeran who plays himself. (And, yes, you can expect a lot of jokes at the expense of Mr. Sheeran.) Meanwhile, Jack's strange circumstances bring his relationship with Ellie to a head after many years of them just being friends.

Yesterday, while erasing The Beatles from existence in its cinematic universe, is a love letter to the legendary band. One of the main points the film emphasizes is that the songs in themselves are great works of art, and will live on no matter whose voice breathes life into them. And if you find yourself singing to the short preview above, then you know the film's done its job.