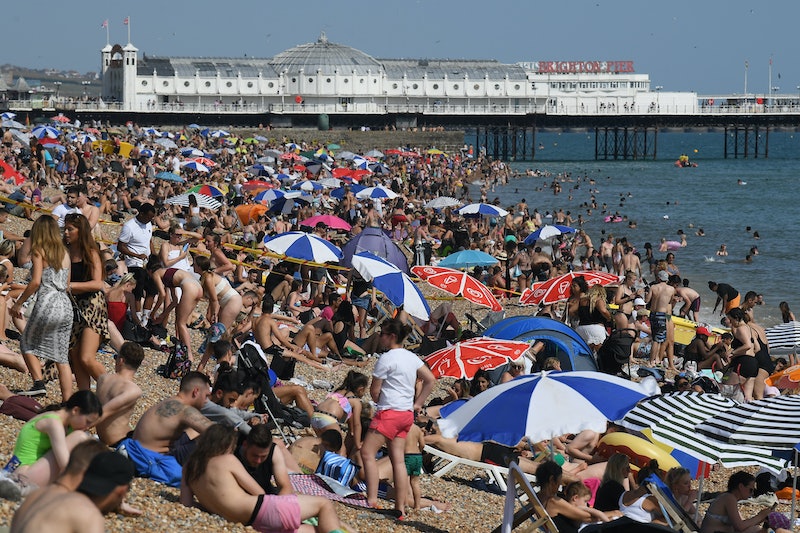 A new water quality report by two think tanks was released on Tuesday, and the news isn't great: the water quality at many U.S. beaches is impacted more than you realized by literal poop. Specifically, these beaches are being contaminated by sewage and runoff, which lead to a high concentration of bacteria in the water. And if the thought of swimming through someone else's fecal matter isn't enough to alarm you, consider the fact that bacteria can potentially make you really sick.

The report, which was released by Environment America Research and Policy Center and Frontier Group, studied data from 4,523 beach sites in 29 states. Specifically, the report looked at beaches found along coastal states, Great Lakes states, and Puerto Rico. Per the report, researchers analyzed bacteria samples and found that 2,627 beach sites (more than half of the sites) were potentially unsafe for swimming during at least one day in 2018. Even more alarming, researchers found that 605 beach sites were deemed potentially unsafe for swimming during over 25% of the days when sampling took place.

Environment America published a press release to accompany the report on Tuesday. The release included a series of conclusions from the report, as well as a call to action:

To keep our beaches safe for swimming and protect Americans’ health, policymakers should undertake efforts to prevent runoff pollution, including through the use of natural and green infrastructure that absorb stormwater onsite.

Swimming through poop-infested waters is obviously gross. But Environment America also pointed out the physical health risks that come with the nasty situation. Within the press release, the organization wrote in part, "Human contact with the contaminated water indicated by bacteria testing can result in gastrointestinal illness as well as respiratory disease, ear and eye infections and skin rash."

Unfortunately, the problem doesn't just have to do with the location of sewage pipes and their proximity to beaches. The report explained that fecal contamination in beaches is the result of a number of sources, including urban runoff, sewage leaks or overflows, and even industrial livestock operations.

If you're concerned about whether or not you've been swimming in contaminated water this summer, you can read the report to see a full breakdown of what beaches were tested and what the results were. The report even offers a state-by-state analysis; for example, 276 beaches in the state of New York were found to be potentially unsafe for swimming on at least one day in 2018.

The report offers a number of solutions to this apparent problem. First, it highlights the need to better prevent sewage, urban runoff, and manure pollution. Second, it encourages policymakers to take action toward giving beachgoers more accurate information about where they're swimming, including performing same-day bacteria tests at beach sites. And lastly, it reiterates the importance of a piece of legislation like the Clean Water Act.

If you're appalled by the notion of thousands of fecal-contaminated beaches across the United States, you can contact your lawmakers and tell them about the report. Specifically, you can point out the situation in your own state (based off of what the report says), and signal your support for legislation like the Clean Water Act.