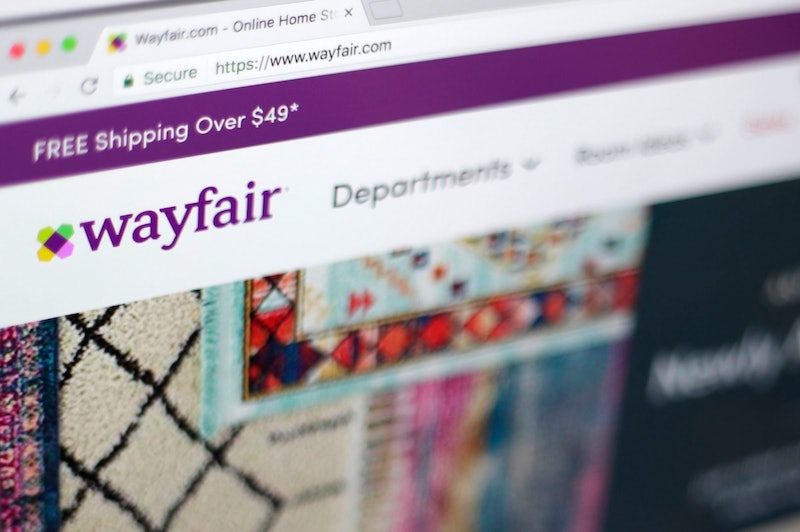 Employees at the national e-commerce company Wayfair took a stand Wednesday to protest their employer's sale of bedroom furniture to federal border detention facilities. Employees began walking out of the company's headquarters in Boston beginning at 1:30 p.m. — and photos of the Wayfair walkout reveal a commitment to ensuring that their company isn't affiliated with migrant detention centers.

As TIME reported, the Wayfair walkout resulted after around 500 employees wrote a letter to the company's CEO, Niraj Shah, requesting that it cancel the sale of over $200,000 of bedroom furniture to BCFS, an organization that contracts with the government to manage border detention centers. CNN Business noted that BCFS soon plans to open a new detention center in Carrizo Springs, Texas, that will house around 1,600 unaccompanied children.

"The United States government and its contractors are responsible for the detention and mistreatment of hundreds of thousands of migrants seeking asylum in our country — we want that to end," the employees wrote in their letter. "We also want to be sure that Wayfair has no part in enabling, supporting, or profiting from this practice."

In response to its employees' request, Wayfair noted in a letter that it still plans to proceed with the sale, saying it has a responsibility to customers to fulfill their orders. The company also added that, "this does not indicate support for the opinions or actions of the groups or individuals who purchase from us." Bustle has reached out to Wayfair for comment.

As the photos below demonstrate, Wayfair's employees are not backing down from their request. On the Wayfair Walkout's Twitter page, organizers indicated that they want Wayfair to donate all profits it makes from the sale of the furniture to Texas' Refugee and Immigrant Center for Education and Legal Services (RAICES) if it proceeds with the transaction.