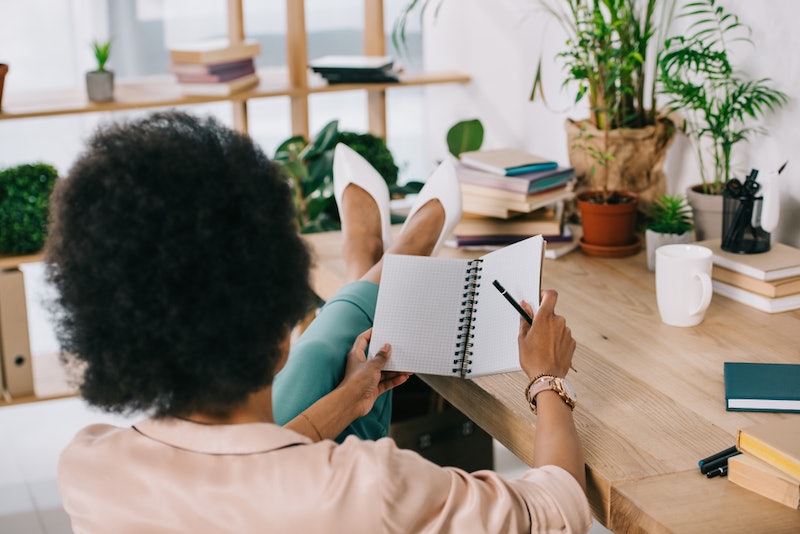 Maintaining an actual work-life balance can be, in a word, difficult. Between demanding bosses, being devoted to your work, obligations to family and friends, and the need to take care of yourself, work and life can often get in the way of each other. But how do people actually make this balance, well, work? The Bustle Trends Group asked 283 women about their work-life balance, and their answers were revealing. According to the results of the survey, millennial women are intensely invested in their work lives, side hustles, and volunteer and community activities, while also searching for personal fulfillment and self-care in their non-work lives. It's a tricky juggling act. However, they also had proactive ideas about how to make things better.

"I was in a new job that had a company culture of who could stay the latest," one respondent tells Bustle. "It led to burnout."

"The company atmosphere made me feel that I was 'disposable' if it came down to it," another respondent says. Quitting, for nearly 40 percent of the respondents, became their way out.

Respondents were also open about the factors that made them feel as if they were devoting too much time to work. Having to be available outside of work, via email, phone, or otherwise, threw off 26.5 percent of respondents' work-life balance. Constantly being available meant that many felt like they were never able to "turn off." Just over 30 percent said high-stress work environments created an imbalance, while 28 percent said that expectations about housework and home life responsibilities were a factor, too. Pressure to take on extra shifts or be on call was a worry for just under 17 percent of women. One respondent reported having to spend a lot of commuting time as a blow to her work-life balance because she "can't afford to live closer to work," while others said obligations to family members or pets kept them from fully recharging after their jobs.

While a large quantity of women said they had more than one job — 26.5 percent, with six percent holding down three or more — 13 percent of respondents said that their side hustles made them feel pressured or unbalanced. There was also a huge variety of reasons for taking on side jobs and second or third activities: women documented following their passions with unpaid projects, building businesses they hoped would one day be their primary income, and using their other jobs to de-stress and express themselves creatively. Women taking classes for graduate or night school also reported feeling pressure between their working lives and the demands of their degrees; course work restricted their time off and caused conflicts with their sleep and work schedules. "It's hard to stay on track and be successful in grad school if you set boundaries for work-life balance," one woman says.

Many were creative with how they spent their time. "I do a work trade at my yoga studio so I don't have to pay for yoga (couldn't afford it if I did)," one respondent explained. Several said they do volunteer work at NGOs and local charities, while one woman says her side hustle was her lifeline: "I had it for years while working full time as a way of being able to get out of my 9-5 eventually. Got laid off this fall and am finding ways to make the side hustle into my full-time."

While 74 percent of the respondents reported having one primary job, the large amount of side hustles reflects the diversity of the job market: millennials are now doing a lot more flexible work, and the gig economy is reshaping how many people earn their money. Work is changing, and that's causing both stress and opportunities for women.

Over three-quarters of women reported feeling nervous to set boundaries to increase work-life balance. Many said they were "people-pleasers" and "afraid of disappointing others," but other respondents said they feared retaliation and negative impacts on their careers if they asserted themselves at work.

"I have felt like [negotiating for better work-life balance] might make me come across as being less than committed to my job," one woman said. "I feel guilty asking others in my office to take up the slack if I am taking more time for myself and my family," another commented. Workplace cultures that "expected" overtime and extremely long working hours were also cited, as were unsupportive and critical bosses. "My old boss would text me at 5 a.m. and when I finally asked her to stop because it was waking me up too early, she said it wasn’t her problem," one respondent said. Anxiety about losing jobs or being seen as "lazy" by other coworkers were also frequently cited reasons for feeling too nervous to make changes.

Women who said they'd successfully made some changes for their work-life balance also had a lot of tips. "I base extra work off my schedule. So if there's something that needs to get done, I will do it after dinner or a workout if I have it scheduled," one said. "I literally don't check my email over the weekend," another said, while a third noted, "There can be a lot of pressure to stay late or always be available, but in my current jobs I've set boundaries early, and reinforce them often." Another said being pregnant had taught her the necessity of a good work-life balance.

Taking control also made some respondents feel as if they had more agency. "In the past, I would feel like I’m asking for too much or that I would appear weak or incapable of 'doing it all.' Now I know better," one respondent said. In working environments with great bosses that emphasized down time, women reported feeling more able to disconnect.

Clearly, there's a long way to go when it comes to work-life balance for many of us — and it shouldn't be purely our responsibility to make sure that work doesn't drive us until we burn out. Bosses and workplace rules need to be better at protecting work-life balance for employees, not punishing people who prioritize it. But in the meantime, women are resourceful, taking on a lot of opportunities and responsibility, and finding ways to stretch creatively outside the 9-to-5 grind.

More like this
Gemma Collins' Net Worth Is Only Going Up
By Catharina Cheung
What Is Brad Pitt’s Net Worth? The Bullet Train Star Now Makes 8 Figures Per Film
By Hugh McIntyre
What Is Beyoncé's Net Worth? The 'Renaissance' Hitmaker Makes 9 Figures On Tours
By Radhika Menon
Young People Are Still Experiencing Period Poverty In UK Schools
By Sophie McEvoy
Get Even More From Bustle — Sign Up For The Newsletter