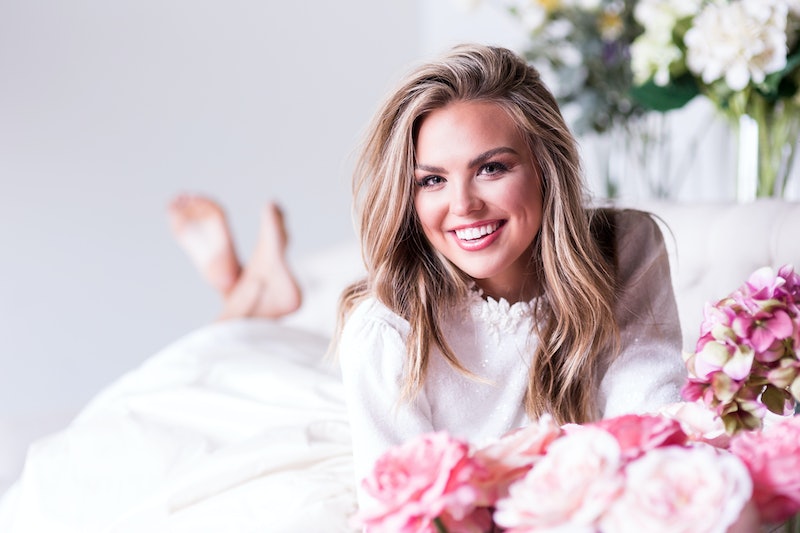 "I have not always been as assertive as I am now," Hannah Brown, one of the most assertive women of the summer, tells Bustle one week after her Bachelorette finale. During the July 30 finale, fans watched Hannah call out, school, clapback, shut down (whatever variation you want to use) Jed Wyatt for having a girlfriend leading up to The Bachelorette and going on the show for the "wrong reasons." Between that and Hannah's famous rebuke of Luke Parker — "I have had sex... and Jesus still loves me" — there were probably many moments in this season's Bachelorette where you stared at your TV screen and said, "That. I wanna do that."

For Hannah, being someone who stands up for herself (on national TV, nonetheless) hasn't always come naturally. She remembers how being a teenager led her to situations where people didn't treat her right, whether it was in a relationship or "girls being bullies" to her or other people.

"I know that as a girl in high school and even into college there were times where people didn't treat me right and I just kind of let them walk all over me," she says.

Whether it be because of society or how she grew up, Hannah thought she knew what the "perfect woman" was when she was younger: "soft" and "gentle." But as she got older and came across relationships that she felt allowed people to "walk all over [her]," she learned that while she can be "soft" and while she can be "gentle," there were times that "you didn't have to be and you shouldn't be."

"I think, just with the experiences I've had and enough being enough, I finally found my voice," she says.

"I've always been this strong woman, but I've not always felt like it was OK to be."

And then The Bachelorette happened. Throughout the season's euphoric highs and shameful lows, Hannah did what she wanted to do, said what she wanted to say, (see her Men Tell All exclamation: "I'm so over being slut-shamed!"), and became one of the series' favorite leads simply for being herself.

"It's always been inside of me ... I've always been this strong woman, but I've not always felt like it was OK to be," she says.

Following the show, Hannah has ignited the same strength in others to use their voice to stand up for themselves, call out a sh*tty guy, maybe even move a rose podium to make a point (if you ever find yourself in that situation). "I didn't try to have some agenda going on to the show," Hannah says. "I was just being myself. But what has happened... it's created this spark for people looking into their own relationships and how they respond to men or to situations."

Because Hannah (who can be seen on the upcoming season of Dancing With the Stars this fall) has redefined the clapback on The Bachelorette, Bustle asked her to reveal how she would respond to everyday situations where others, especially women, may have trouble summoning the right comeback in the moment. And, let's just say, she delivered.

What do you say to someone when they tell you to smile, or say you should smile more?

What do you say to someone who tries to talk over you or constantly interrupts you?

"I have a very soft voice... so, this happens to me quite a bit. First I get quiet and just let them talk. But then, I usually go, 'Excuse me, I'm talking now,' and just make it known that you have something to say.

"Don't back down. You can be polite for a second, let them finish their thought, be the one that can be polite first and then, make sure that you get your thoughts in, too."

What do you say to someone who questions your authority or a decision that you've made?

"I'm always interested to see what, especially somebody who knows me, they have to say. I always respect hearing from people, that like I said, actually know me, not from just random people on the street or [people on] social media, what their views are on what I do and how I should do things. But at the end of the day, I think I would say [to someone who questions my authority], 'I respect, that but this is my life and I'm going to make the decisions that are best for me. And I will figure it out as I go.'"

"That's great, but you're not me and you're not in this situation, so you actually don't know what you would do."

How do you respond to someone who texts you back with a "K"?

How do you respond to a stranger telling you what you should have done in a situation?

"That's great, but you're not me and you're not in this situation, so you actually don't know what you would do."

What do you say when you know a friend isn't being honest with you?

"If I have a friend that has upset me or I feel like is not being 100% honest, I handle that straight on. Either just calling [them] or meeting up face to face and just asking, 'What's the deal?' and 'What's going on?' And if you're a true friend, then you can be 100% honest with each other and if you can't be, then maybe you should have different friends."