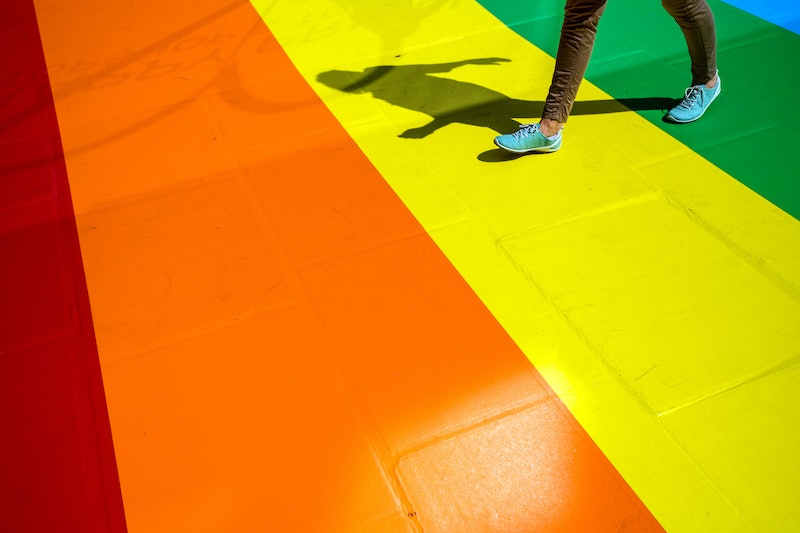 This Equal Pay Day, we'll be marking the fact that women would have to extend their 2017 work year until April 10, 2018, in order to make as much money as men did by Dec. 31, 2017. And while there will undoubtedly be plenty of much-needed Equal Pay Day conversations about the gender pay gap, it's rare that these discussions acknowledge the workplace experience of LGBTQ people. In order to accurately talk about the "gender pay gap," we need to do so more inclusively — and include LGBTQ folks.

A recent survey from Student Loan Hero showed that LGBTQ people make less money than non-LGBTQ people on average, with more than half of LGBTQ respondents reporting wages of less than $50,000 per year. And many LBGTQ people still, in 2018, work in places where they could legally be fired for being queer. If we're going to talk about wage gaps and workplace equality, we cannot do so without recognizing that LGBTQ folks, particularly transgender women of color, face some of the most significant financial workplace hardships of all.

Miranda Marquit, a financial expert and the lead researcher on Student Loan Hero's survey, tells Bustle, "In general, [LGBTQ people] start with less access to financial resources and tools, and that impacts them later." Marquit emphasizes that not only does survey data indicate we have more limited access to student aid and are generally at risk of being "denied financial services based on their gender identity or sexual orientation," but we also have less job security overall.

According to the nonprofit Institute for Women's Policy Research, the gender wage gap between white cisgender men and white cisgender women was 20 percent in 2016, and based on data trends, it would take until 2051 for those women to reach pay parity with those men. But 2051 is basically tomorrow compared to when women of color will reach pay parity: 2124 for Black women and 2233 for Hispanic women, according to the Institute for Women's Policy Research. Data about when Native American women will reach parity was not available from the institute, but information from the National Women's Law Center shows Native women make $0.57 for every dollar earned by a white man, while white women make $.81 per dollar.

More and more conversations around equal pay have begun to acknowledge these discrepancies, as evinced by Black Women's Equal Pay Day on Aug. 7, 2018, Latinx Women's Equal Pay Day on November 1, and Native American Women's Equal Pay Day on Sept. 27, which is a net good thing. But what's often forgotten, as these conversations have become more inclusive, is how LGBTQ people experience intersections of marginalization that don't apply to cisgender and straight women — and which disproportionately impact their ability to earn a living. Trans women of color have to contend with lower pay based on racial inequality, as well as the fact that trans people as a whole face hiring discrimination, meaning job opportunities for us are slimmer than opportunities for cisgender people.

John Schneider, a nationally recognized LGBTQ personal finance expert who cofounded Debt Free Guys and also contributed to Student Loan Hero's study, tells Bustle that experts are seeing that, though "we've made progress with gay and lesbian acceptance, trans people are still stigmatized in our society." And when trans women are able to find a full-time, well-paying job, Schneider says, "they're often forced to hide their true selves."

Trans women of color are also disproportionately affected by anti-trans violence, and like all other trans people are four times more likely to live in poverty, according to a report from the Movement Advancement Project and Center for American Progress. On top of that, a study showed "the earnings of female transgender workers fell by nearly one-third following their gender transitions," according to American Progress.

Equal Pay Day is undoubtedly a feminist day. That means, though, that we need to be marking it intersectionally, in a way that purposefully uplifts those of us who deal with the crossfire of multiple marginalizations. We should be listening to stories like that of Izza Lopez, who accepted a job with an imaging and diagnostics company, only to have the job offer rescinded "because of her 'misrepresentation' of herself as a woman," Lambda Legal, who represented Lopez in her case, said on its website.

"I was interviewed by a manager and a director who both felt I was qualified to do the job," Lopez said, also reported on Lambda Legal's site. "I was shocked when I received the call from human resources taking away the job they'd offered me — it felt as if they'd said to me 'you're a monster; we don't want you here.'"

"Whether you’re queer or not, we must all remember that equal effort deserves equal compensation."

Lopez ended up settling her case in 2008, but she remains one of the few trans women of color who has been able to legally challenge an employer who showed discriminatory behavior, even though discrimination based on gender identity is prohibited under Title VII.

And while we're talking about fighting for equal pay, we also have to talk about the fact that trans women of color desperately need and deserve safe employment. Broadly reported that because trans women struggle to find work and have an unemployment rate that's nearly four times that of the general population, they can be pushed to take on dangerous work to afford basic necessities, putting them at higher risk for violence. Schneider tells Bustle that because trans women are given fewer opportunities, "they are often forced to turn to sex work and experience homelessness. These circumstances make it harder to get a full-time, well-paying job."

So, spend today listening to the voices of marginalized groups. If you're able, donate to places that support the LGBTQ community, like Lambda Legal, and to organizations that specifically support trans people, like the National Center for Trans Equality, TransCanWork, and the Trans Employment Program. Remember that it's common for mainstream movements to leave out those who most need help — and remember that you can make a difference by boosting their voices on Equal Pay Day, and every day.

"For queer people, as with women and unlike straight, white men, we must be prepared to fight tooth and nail for every penny we think we're worth," says Schneider. "Whether you’re queer or not, we must all remember that equal effort deserves equal compensation."