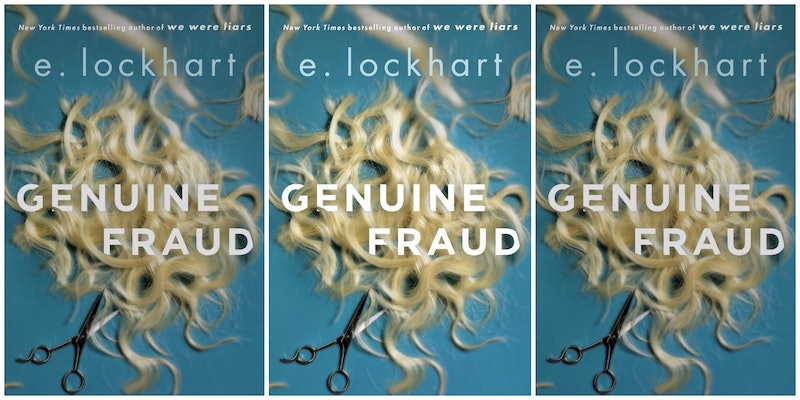 Remember the summer of 2014, when the only book anyone could talk about involved four friends, a private island, and a tragic accident? If you — like me — were totally blown away by the propulsive prose and shocking twist of We Were Liars, then you'll be thrilled to learn about what's next from author E. Lockhart: Genuine Fraud, out Sept. 5 from Delacorte Press. Bustle is proud to reveal an exclusive preview of the new novel, which you can read below.

Genuine Fraud is a thriller in reverse. It's the story of Imogen and Jule. Imogen is a runaway heiress, an orphan, a cook, a cheat; and Jule is a fighter, social chameleon, and athlete. The two girls get caught in a web of intense friendship, murder, and romance — but the reader has to decide: who is genuine? And who is the fraud? If you think that sounds like a skimpy description, trust me when I say that the less you know, the better the reading experience.

Can't wait until Sept. 5 to get your hands on Lockhart's latest? No worries — Bustle has an exclusive excerpt from Genuine Fraud, out Sept. 5, below.

Jule West Williams was nice-enough-looking. She hardly ever got labeled ugly, nor was she commonly labeled hot. She was short, only five foot one, and carried herself with an uptilted chin. Her hair was in a gamine cut, streaked blond in a salon and currently showing dark roots. Green eyes, white skin, light freckles. In most of her clothes, you couldn’t see the strength of her frame. Jule had muscles that puffed off her bones in powerful arcs—like she’d been drawn by a comic- book artist, especially in the legs. There was a hard panel of abdominal muscle under a layer of fat in her midsection. She liked to eat meat and salt and chocolate and grease.

Jule believed that the more you sweat in practice, the less you bleed in battle.

She believed that the best way to avoid having your heart broken was to pretend you don’t have one.

She believed that the way you speak is often more important than anything you have to say.

She also believed in action movies, weight training, the power of makeup, memorization, equal rights, and the idea that YouTube videos can teach you a million things you won’t learn in college.

If she trusted you, Jule would tell you she went to Stanford for a year on a track-and-field scholarship. “I got recruited,” she explained to people she liked. “Stanford is Division One. The school gave me money for tuition, books, all that.”

Jule might shrug. “I wanted to study Victorian literature and sociology, but the head coach was a perv,” she’d say. “Touching all the girls. When he got around to me, I kicked him where it counts and told everybody who would listen. Professors, students, the Stanford Daily. I shouted it to the top of the stupid ivory tower, but you know what happens to athletes who tell tales on their coaches.”

She’d twist her fingers together and lower her eyes. “The other girls on the team denied it,” she’d say. “They said I was lying and that pervert never touched anybody. They didn’t want their parents to know, and they were afraid they’d lose their scholarships. That’s how the story ended. The coach kept his job. I quit the team. That meant I didn’t get my financial aid. And that’s how you make a dropout of a straight- A student.”

Later in the chapter...

Donovan stopped and opened the driver’s-side door. The light came on inside the car.

“Where are we?” Jule asked. It was dark outside. “San José del Cabo.”

“This where you live?”

Jule was relieved, but it seemed very black out. Shouldn’t there be streetlights and businesses, lit up for the tourist crowd? “Anyone nearby?” she asked.

“I parked in an alley so you wouldn’t be seen getting out of my car.”

Jule crawled out. Her muscles were stiff and her face felt coated in grease. The alley was lined with garbage bins. There was light only from a couple of second-story windows. “Thanks for the ride. Pop the trunk, will you?”

“You said a hundred dollars American when I got you to town.”

“Of course.” Jule took her wallet from her back pocket and paid.

“I thought we were friends.”

He took a step toward her. “I make you drinks because it’s my job. I pretend to like talking to you, because that’s my job, too. You think I don’t see how you look down at me? Second-best Hulk. What kind of scotch. We’re not friends, Ms. Williams. You’re lying to me half the time, and I’m lying to you all the time.” She could smell liquor spilled on his shirt. His breath was hot in her face.

Jule had honestly believed he liked her. They had shared jokes and he’d given her free potato chips. “Wow,” she said quietly.

“Another three hundred,” he said.

Was he a small-time hustler jacking a girl who was carrying a lot of American dollars? Or was he a sleazeball who thought she’d rub up against him rather than give him the extra three hundred? Could Noa have paid him off?

Jule tucked her wallet back in her pocket. She shifted the strap so her bag went across her chest. “Donovan?” She stepped forward, close. She looked up at him with big eyes.

Then she brought her right forearm up hard, snapped his head back, and punched him in the groin. He doubled over. Jule grabbed his slick hair and yanked his head back. She twisted him around, forcing him off balance.

He jabbed with one elbow, slamming Jule in the chest. It hurt, but the second thrust of the elbow missed as she sidestepped, grabbed that elbow, and twisted it behind Donovan’s back. His arm was soft, repulsive. She held on tight and with her free hand snatched her money out of his greedy fingers.