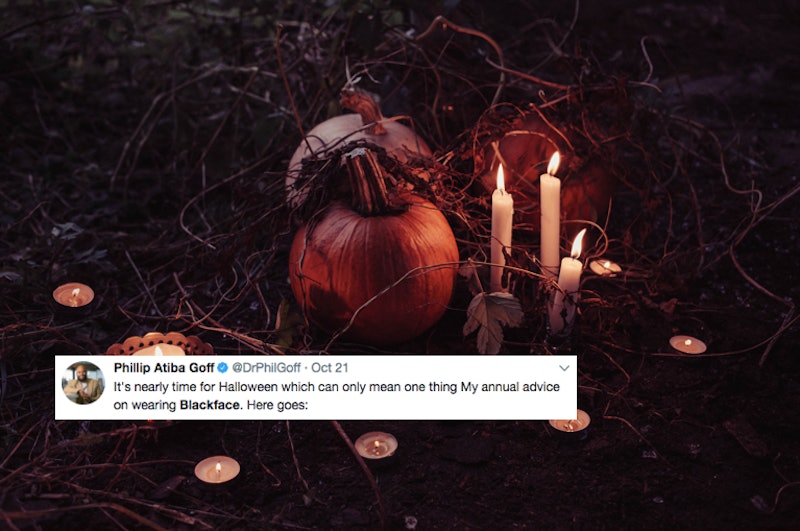 This Halloween, we're having the same conversation we have pretty much every year. What "counts" as blackface, and can a Halloween costume involve face paint without being offensive? The latest instance of blackface controversy came Monday, when Riverdale actor Lili Reinhart issued an apology after being called out for tweeting a picture that many people identified as blackface.

On Saturday, Reinhart shared a picture of a person painted all black to look like a demon and captioned the tweet, "Found my Halloween costume!! Inspired by the color of my soul." In her statement, Reinhart said she "didn't think it would be interpreted as being racially insensitive" and "did not mean for my tweet to come off that way." As expected, people have come out to both defend and condemn Reinhart in droves. With so many people questioning whether she actually participated in blackface — because, as one viral tweet pointed out, she was not attempting to portray a person of color, and to assume so is to further perpetuate racial stereotyping — it's important to pause and look at what the definition of blackface actually is.

Blackface, literally speaking, is the black face paint that (white) minstrel performers would wear to portray Black people, often in a negative or stereotypical way. The practice dates back to the 19th century, and has super racist roots. White performers would paint their faces jet black and wildly exaggerate the shape of their lips to stereotype Black characters during minstrel shows. These shows remained popular through the 1950s and 1960s, only becoming unpopular as Americans became slightly more open to racial sensitivity. Today, most people aren't dressing up in as overtly racist a way as they did in the 1800s, but every Halloween, celebrities still wear offensive costumes and people still dress up in blackface — or its close cousins, brownface or yellowface — and say they don't realize it can be construed as racist.

It's important to note that, using that definition, not all examples of painting one's face are the same thing as blackface, which Twitter user @Audnyhood, referring to the backlash around Reinhart's original tweet, pointed out — though if there is any doubt about whether or not your costume's use of face paint could be construed as racially insensitive, it's better not to do it. Many people on Twitter voiced their frustration that anyone would interpret a demon costume as blackface in the first place. Still, Reinhart's photo raises important questions: Does it matter if someone is portraying a non-human with their face paint? With the shameful history of blackface, you're probably better off avoiding black face paint, full stop, if that is not your skin color. Ask yourself: why do you need black face paint for your costume in the first place?

Here's the thing: Even if blackface is unintentional, it's not like you'll trip and fall into a vat of black paint. You can be aware of what you're doing, and there are things you can do to avoid your costume being racist or racially insensitive.