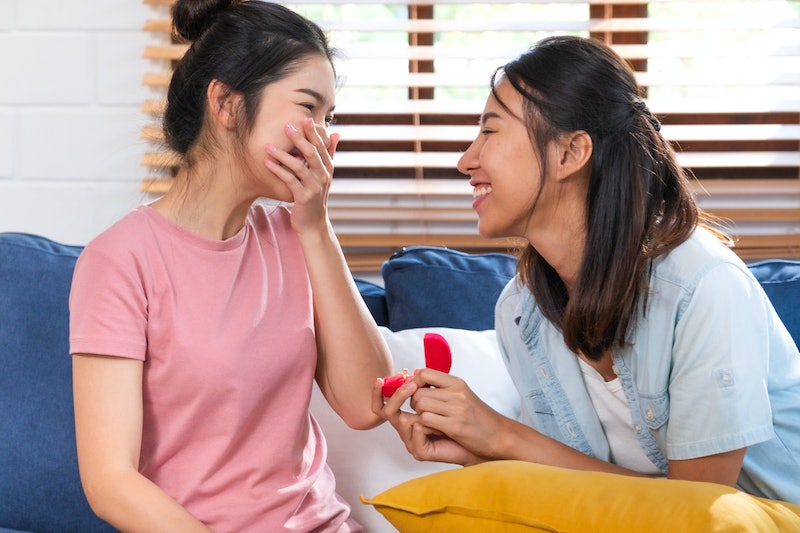 When you think of a proposal, typically one person gets down on one knee, while the other gasps in surprise. Traditionally, engagements do come as a surprise, and people are genuinely shocked when their partner pulls out the ring and pops the question. But according to recent trends, engagements aren't really a surprise anymore, and wedding experts say, that's actually a good thing.

According to The Knot 2017 Jewelry & Engagement Study, only one in three marriage proposals in the United States are actually a surprise. Nearly 25% of couples discuss marriage at least two years before getting engaged.

"If you really stop and think about it, the idea that a life-changing commitment, such as a proposal, should be a surprise is a bit scary," Karen Norian, wedding planner with Simply Eloped, tells Bustle. "More couples are also choosing to plan out their future together, as opposed to one partner springing a surprise on the other. That means that talk of engagement and marriage are almost always on the discussion table."

There are a few major things you need to discuss with your partner before making the decision to spend the rest of your life with them. For instance, The Knot found that 96% of couples have open discussions about kids, 90% discuss finances, and 80% talk about physical intimacy and married life before getting engaged. "Understanding what the other person expects and hopes for their future is imperative to know before committing yourself to each other," Norian says.

But knowing your partner and understanding their expectations aren't the only things that make engagements less of a surprise today.

More Couples Are Shopping For Engagement Rings Together

As Toni Zehrer, engagement ring expert and chief merchandising officer at Kay, Jared and Zales, tells Bustle, more and more couples are purchasing engagement rings together. According to recent research conducted at Kay, Jared and Zales, 31% of couples make the decision together, and another 20% say the recipient drives all or most of the ring decisions.

"Getting engaged is such an important milestone in a couple’s life," Zehrer says. "Proposers want to be certain that they choose that one-of-a-kind ring their soon to be fiancé will fall in love with."

In fact, The Knot's 2017 Jewelry & Engagement Study found that 89% of grooms said they were happy with the amount of involvement their partner had in the ring buying process.

This ties into one of the biggest reasons why more engagements are becoming less of a surprise.

Many Couples Today View Their Relationship As A Partnership

"Couples I work with describe their relationship more often than anything else using the word 'team,'" Katelyn Stanis, founder of Wedding Words, tells Bustle. "They view their relationship as an equal partnership. When it comes to deciding if and when they'll get engaged, it's a team decision."

When it comes to getting engaged and married, there are still traditions people like to stick to. For instance, The Knot found that 40% of people still plan their proposals down to the last detail. But since it's supposed to be a team decision, the only rules you need to follow are the ones you and your partner make up yourselves. It doesn't really matter what you do. You don't need to stick to tradition if you don't want to.

"With LGBTQ+ couples getting engaged more often, the entire wedding industry has shifted to favor inclusivity over heteronormative tendencies," Stanis says. "This means both LGBTQ+ and straight couples are challenging who proposes and how."

For example, one of Stanis's clients proposed to her longtime girlfriend, who then proposed to her a few weeks later. "They each wanted the experience of getting to ask and of being asked," Stanis says. "The focus wasn't on the proposal being a surprise. The focus was on them breaking tradition to celebrate their engagement in a way that felt personal and special to them."

Keep in mind, just because you know an engagement is coming, it doesn't mean that the details of the proposal itself can't be a surprise. It's just not a bad idea to make sure you and your partner are on the same page before committing to a future together.

Ross, S. (2017, November 15). This Is the Average Engagement Ring Spend in 2017. Retrieved from https://www.theknot.com/content/the-knot-2017-jewelry-and-engagement-study.

More like this
Is It A Rebound Relationship Or The Real Thing?
By Carolyn Steber and Lexi Inks
The Best Time To Date After A Breakup, According To Experts
By Bustle Editors
20 Things You Should Never Tolerate In A Relationship
By Rachel Sanoff and Kathleen Ferraro
12 Ways You're Sabotaging Your Love Life
By Teresa Newsome and Lexi Inks
Get Even More From Bustle — Sign Up For The Newsletter