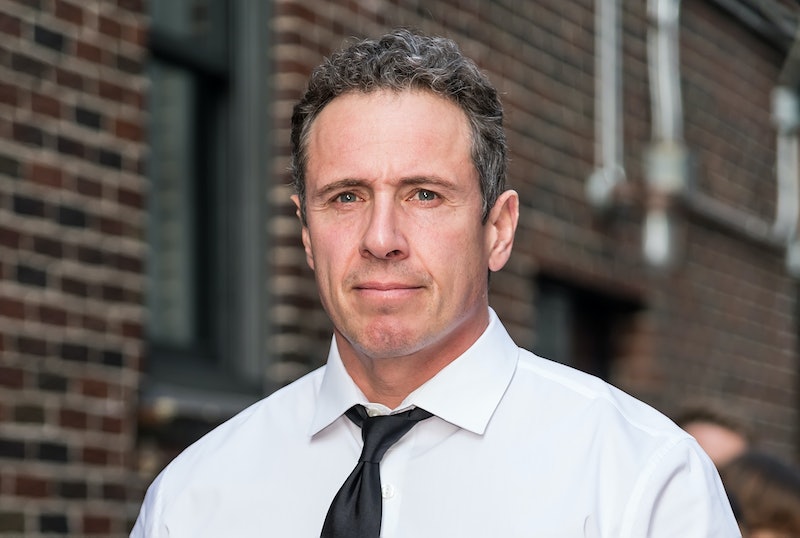 Sooooo. I have a confession to make.

On March 31, when CNN anchor Christopher Charles Cuomo announced he'd been diagnosed with COVID-19, the internet broke out into an uproar. Twitter users shared sympathetic well-wishes and flooded the now-viral video of Chris roasting his brother, New York governor Andrew Cuomo, with thirsty comments. Me? I was both grief-stricken and peeved. You see, I know you love Chris Cuomo — but I love him more.

This week, everything is coming up Cuomo. According to Google Trends, searches for "Chris Cuomo shirtless" have spiked. "Chris Cuomo young" autofills in Google search. But your infatuation with the younger Cuomo brother is nothing but a passing fad, a schoolgirl crush. In a week's time, your attention will wane, thwarted by a video of a cute puppy or a breaking celebrity feud.

Not me. This is no phase, but true passion. I have been tuning into Cuomo Prime Time since it first aired in 2017. I live to "get after it." All those times you thought I canceled our dinner plans because I was working late or on deadline? I was actually glued to my TV, drinking red wine and watching Chris Cuomo verbally joust with his "brother," Don Lemon.

What do you know of "Closing Arguments"? How many times have you watched Chris flail his arms while frantically scribbling on a Staples whiteboard? True Cuomo stans will know that in 1997, he was named one of People magazine's "Most Beautiful People" and W magazine's "Most Eligible Bachelor." Day One shippers will recognize the look of silent irritation that overcomes Chris' face whenever Andrew cameos on the show (which he's been doing for years, btw) and calls Chris "little brother" or declares him the meatball of his family.

"I followed Chris on both Twitter and Instagram, and one day I noticed the fan page — I think there were 1,000 people, maybe less," Cheryl Anderson Lindstrom, one of the group's administrators, tells Bustle. "It has been a labor of love. We are getting thousands of posts a day, as well as requests... People leave very heartfelt messages, as well as advice, for Chris."

"When I moved into my first apartment and bought a TV, I'd wake up and watch New Day with Chris Cuomo and Alisyn Camerota," Simi, a 25-year-old self-professed "CC Stan," tells Bustle. "I've been a Don Lemon fan for as long as I've been a Cuomo fan, so seeing my morning guy and my evening guy join forces has been a real treat."

Similarly, his Instagram account, the platform on which Chris mainly shares videos of him pumping iron at the gym, has 393,000 followers. "Were you a big dude back in the day, Chris?" one admirer asks. "When I was younger I was a beast! Now it is about functionality," he replies. Unlike other television personalities, Cuomo writes back to his followers and engages his fans. During a time of uncertainty, he's more accessible than hand sanitizer.

So how does it feel to have the world wake up one morning and suddenly smell the Chris Cuomo coffee? For some devotees, invasive and utterly mainstream.

Seeing him take off is sort of like seeing chunky white sneakers become cool after years of wearing them.

"Seeing him take off is sort of like seeing chunky white sneakers become cool after years of wearing them — painful, because I want to feel special," Gabrielle, 29, tells Bustle. "But at least I have others with whom I can now share my obsession."

Simi appreciates that Cuomo's day in the sun has come, adding that she and her friends have now grown accustomed to texting during the Don Lemon handover. "It's become my version of The Bachelor," she says. "We'll send each other messages, like, 'Don's feeling feisty tonight,' or, 'Wow, Chris looks under the weather, I hope he doesn't have COVID-19.' I actually sent that text before he or CNN publicly confirmed that to be the case. I know my Cuomo."

With a hunger for investigative reporting and a love of rolling up his sleeves — literally and figuratively — I'd argue Cuomo's attention is well-deserved. And I get why it's happening — the Cuomos epitomize the average American family. They squabble like toddlers. They lovingly compete for their mother's affection. They're flawed, endearing, and human. They feel familiar and relatable in this utterly surreal world we live in.

But there's a difference between intrigue and devotion. "[Fans] are willing to sit through some of their least favorite political people because they trust that Chris does not have ulterior motives and wants to show the complete side to a story as opposed to only getting one viewpoint," says Lindstrom. "He would say he is bringing truth to power."

Fandom knows few bounds, and we, true Cuomo lovers, see him as he is. We've weathered problematic public outbursts, questionable political rants, and laser-focused eyes. Still, we tune in night after night.

So go forth. Gawk at the Cuomo brothers and send your sympathy. I'll be here waiting. Because for me, Don Lemon, and 31,851 other die-hards, our love of Chris Cuomo isn't conditional. It isn't rational. It just is.

"If you love someone, let them go, they say," Gabrielle says. "Be free, Christopher."

More like this
The 19 Best Tweets & Memes About Bisexual Awareness Week
By Lexi Inks
Are Quality Time & Gift-Receiving Love Languages Compatible?
By Lexi Inks
The Differences Between Polyamory & Open Relationships
By Lexi Inks
Zendaya Shares Intimate Photo With Tom Holland To Wish Him A Happy Birthday
By Bustle Editors
Get Even More From Bustle — Sign Up For The Newsletter