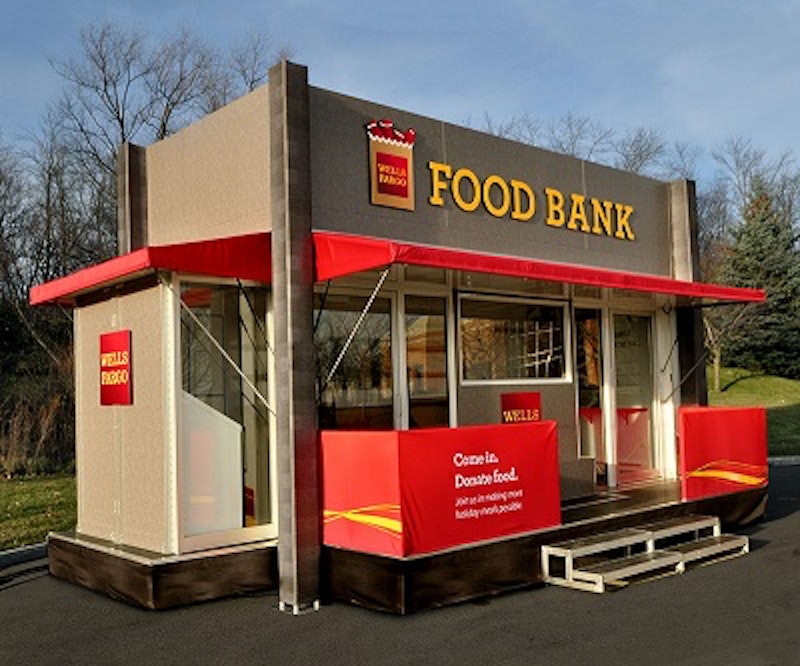 Food insecurity is a massive problem in the United States. Last year, over 40 million people lived in food-insecure households. Many of these households rely on community and government assistance to have enough food throughout the year, and one in seven Americans relies on food banks to feed their families, according to Feeding America. Food banks support local hunger-relief initiatives by distributing food and by raising awareness about the scope of the issue in the areas they service, and now one (financial) bank is trying to make it easier to get food to those in need. On Giving Tuesday, Wells Fargo announced that nearly 6,000 of its locations will transform into food banks. In addition, Wells Fargo will be sending mobile food banks to 17 U.S. cities this coming December. As a part of this initiative, Wells Fargo will donate $5 million to United Way Worldwide, an organization dedicated to fighting for the health, education, and financial stability of every person in every community, and Wells Fargo team members will volunteer a combined 5,000 hours.

“We developed this initiative as part of our broader commitment to building better communities and working with partners like United Way to make that a reality,” Jon Campbell, head of Wells Fargo’s Corporate Responsibility and Community Relations group, tells Bustle. “We are encouraging our 268,000 team members to volunteer at local food banks, in an effort to support our local communities and make it easier for people to give back this holiday season.” This initiative comes during a time when the need for food access high and annual charitable giving is lower than in years past. Annual charitable support dropped from $1,011 per person in 2007 to $872 in 2015, according to Indiana University and Purdue University.

The purpose of this initiative is to make donating more local and convenient. The bank surveyed its customer to get more insight about their attitudes towards donating, and their study yielded some really interesting results. Most folks want to give, but they’re also extremely busy. Of the 1,000 adults surveyed, a whopping 83 percent reported that they would be more likely to donate food this season if they could do so at a convenient location in their local community, and 40 percent of Americans reported not knowing where to go to drop off food donations. The sheer number of Wells Fargo banks-turned-food banks could mitigate the issue of folks not knowing where to go to donate food.

Wells Fargo’s food bank initiative has the potential to positively impact the food waste problem in the United States. According to the USDA (United States Department of Agriculture), food waste is estimated at between 30-40 percent of the food supply. Wells Fargo’s study found that three out of four Americans throw out at least some of the non-perishable food they purchase. A food bank could use those non-perishable items and distribute them to families in need. With 55 percent of Americans believing donating around the holidays is more important than other times of the year, supporting a food bank is a great option for many families.

Food is a necessity throughout the year, and a means of gathering and sharing quality time during the holiday season. Those in our community who need extra assistance in acquiring food deserve to enjoy themselves without the burden of wondering how they will manage to put food on the table. Donating and volunteering at food banks is a helpful option throughout the year, not just during the holidays. You can make donating and volunteering at your local food bank a regular part of your schedule, and start this Giving Tuesday. Chances are, there is a financial bank/food bank now in your neighborhood.