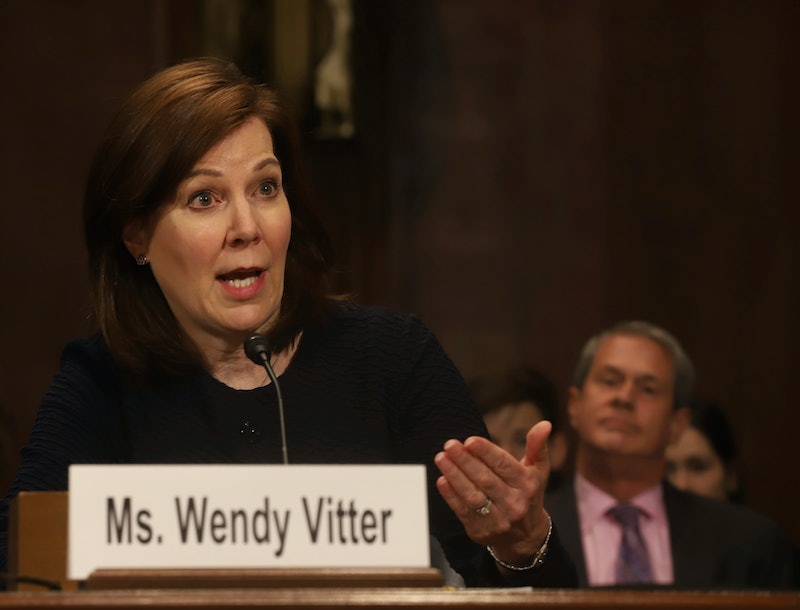 There are a few Supreme Court cases that every student of American history, no matter how disengaged, simply has to learn. One of these is Brown v. Board of Education of Topeka, the 1954 case that effectively disallowed segregation in public schools. By integrating schools, it fundamentally changed the country — and yet when asked about Brown v. Board, Wendy Vitter, a Trump judicial pick, wouldn't say if she supported this landmark civil rights case.

Vitter was nominated by Trump to be a judge in the Eastern District of Louisiana. During her confirmation hearing, Sen. Richard Blumenthal of Connecticut asked the question, "Do you believe that Brown v. Board of Education was correctly decided?"

“I don’t mean to be coy,” Vitter said to open her response, continuing:

I think I get into a difficult area when I start commenting on Supreme Court decisions—which are correctly decided and which I may disagree with. Again, my personal, political, or religious views I would set aside. That is Supreme Court precedent. It is binding. If I were honored to be confirmed I would be bound by it and of course I would uphold it.

When Blumenthal pressed Vitter by asking again if she believed it was "correctly decided," Vitter again offered a similarly indecisive answer.

The ruling she is referring to came after plaintiff Oliver Brown filed a suit on behalf of his daughter, Linda Brown, a black student in Topeka, Kansas, because she had been barred from attending the all-white schools in her neighborhood. Brown claimed that his daughter's treatment was a violation of the "equal protection" clause of the 14th Amendment of the Constitution, because his daughter, in his belief, was not being treated equally by the laws in place.

After a U.S. District Court in Kansas upheld the "separate but equal" doctrine that had come out of the 19th century Plessy v. Ferguson case, the case went to the Supreme Court. In a unanimous decision, the Supreme Court struck down the previous ruling, with Chief Justice Earl Warren declaring that “in the field of public education the doctrine of ‘separate but equal’ has no place" and that schools that were segregated were "inherently unequal." According to the Court's decision, Brown was right in claiming that his daughter had not been receiving equal protection under the law, the decision thus paved the way for integration to begin.

This wasn't the only rocky moment in Vitter's hearing. Vitter has often publicly advocated for anti-abortion policies, and the Democrats present at her hearing repeatedly asked about how she would approach cases that dealt with the precedent set in Roe v. Wade. She confirmed that she was indeed "pro-life," but she responded to another question from Sen. Blumenthal by saying that she would be able to "set aside" her personal or religious views. She also had to answer questions from Sen. Mazie Hirono, a Democrat from Hawaii, about a statement she'd made at an anti-abortion conference in which she claimed that taking birth control pills could contribute to "violent death." When pressed, Vitter admitted that the claim did not in fact make sense.

Vitter also failed to disclose a number of public appearances in which she' made controversial statements, the exact offense that led Republican lawmakers to stop the confirmation process of at least one Obama nominee. She only needs 51 votes to be confirmed though, so she still could get through even with these questions about her record.