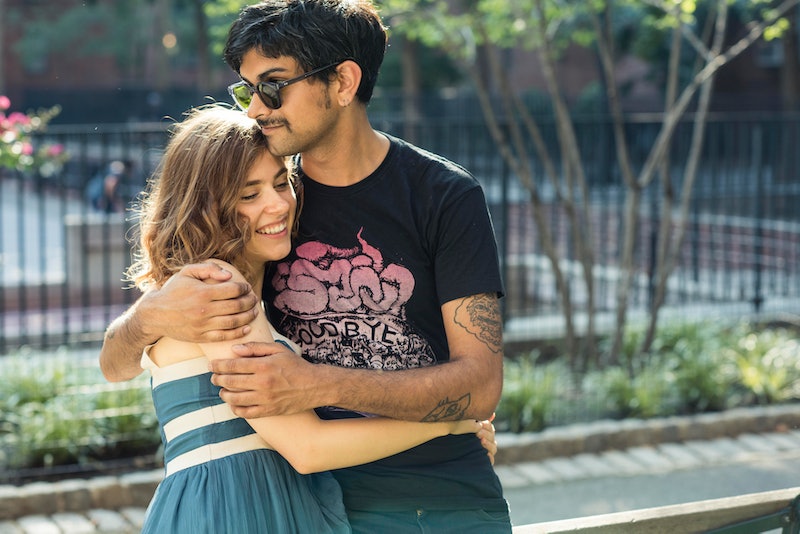 Everybody makes mistakes. Maybe your partner forgets your birthday or makes plans without asking you — or maybe it's something bigger, like cheating. But how easy it is to forgive a partner often depends on the individual. Some people easily let things go, while others will hold a grudge until eternity. But even though some people seem to really want to hold onto every little indiscretion that's ever come their way, new research shows that our brains are actually predisposed to forgive — even when the other person may not really deserve it.

The research was conducted by psychologists at Yale, University of Oxford, University College London, and the International School for Advanced Studies and appeared the journal Nature Human Behaviour. Nearly 1,500 subjects were presented with "good" and "bad" strangers" and asked to give their impressions of those people. Interestingly, people were more sure about their "good" impression of people and less sure of their "bad" impression — being quicker to forgive the "bad" people, even if they had witnessed them doing something bad.

"There is a lot to be said for forgiveness," relationship therapist Aimee Hartstein, LCSW, tells Bustle about the results. "None of us [are] perfect. We all make mistakes. But we also have to be aware of the fine line between giving second chances and enabling bad behavior and putting our emotional or physical selves at risk."

"The human mind is built for maintaining social relationships, even when partners sometimes behave badly."

And yet, our brains seem to be telling us something else — at least, in some circumstances. "The brain forms social impressions in a way that can enable forgiveness," Yale psychologist Molly Crockett, senior author of the paper, said in a press release. "Because people sometimes behave badly by accident, we need to be able to update bad impressions that turn out to be mistaken. Otherwise, we might end relationships prematurely and miss out on the many benefits of social connection." And this research could go a long way toward understanding why people stay in bad relationships.

"We think our findings reveal a basic predisposition towards giving others, even strangers, the benefit of the doubt. The human mind is built for maintaining social relationships, even when partners sometimes behave badly," Crocket said.

How Forgiveness Can Work Against You

But too much forgiveness could be dangerous because it not only keeps people in bad relationships but also means the negative behavior doesn't improve. If you keep forgiving your partner for lying to you, your partner won't really understand how their behavior is affecting the relationship or the other person.

Forgiveness can be a crucial part of a relationship and, as the research shows, it's an innate part of being human. But forgiveness shouldn't keep you in a toxic or damaging relationship. Sometimes, it's OK to not forgive — and to move along for something better.