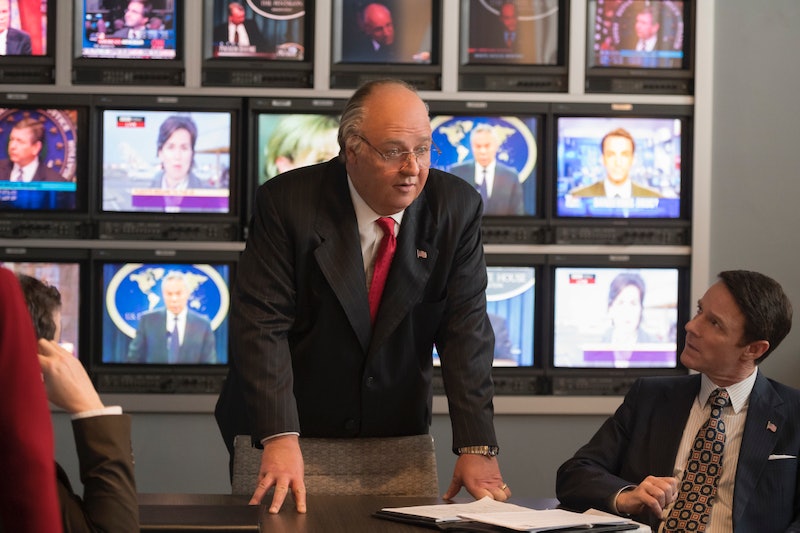 The Loudest Voice tells the story of Fox News and its longtime CEO Roger Ailes, but in a way it also tells the story of how Donald Trump became the President of the United States. Roger Ailes and Donald Trump have been friends for a long time, and Ailes played a direct role in setting up Trump's winning 2016 presidential campaign. While Ailes didn't officially join Trump's campaign until after he left Fox News, the network continues to play a role in supporting Trump politically and providing him with a platform to say whatever is on his mind.

No one could have predicted in Fox News' infancy that Trump would regularly be calling in to the network's morning talk show — except, perhaps, for Ailes. Ailes told Adweek that he's had the same relationship with Donald for 30 years. "It's a friendly relationship, surprisingly enough," he added. Trump returned that sentiment when speaking to Showtime's The Circus, saying that Roger Ailes "is such a great guy. I mean, what he's done on television — in the history of television, he's gotta be placed within the top 3 or 4 or 5."

However, others claim that their relationship sometimes created for obstacles for Fox News, and that Trump was seen as both a benefit to the network but also someone worth being very concerned about. A former Fox executive told The New Yorker that Ailes and Trump "spoke all the time," but that Trump made Ailes nervous. Another former Fox executive, Ken LaCorte, told the same publication that Ailes "thought Trump was a wild card. Someone Ailes could not bully or intimidate."

While Trump may have unsettled Ailes during the CEO's time at Fox News, Ailes' departure from the network left him open to speak with Trump ahead of the 2016 Republican Primary debates. The New York Times suggests that this connection could have provided Trump with a massive advantage, as Ailes had been an esteemed republican strategist for Nixon and a valued debate prepper for Ronald Reagan and George H. W. Bush long before he was the person staging debates for his own network. While his experience was surely an asset to the campaign, Paul Manafort, the Trump campaign chairman at the time, denied that Ailes was advising in any formal capacity and that the ex-CEO would not be joining the campaign.

Gabriel Sherman, the author of The Loudest Voice in the Room, the Ailes biography on which The Loudest Voice is based, told the Los Angeles Times that the connection between Ailes and Trump is crucial to understanding how Trump became the president. Sherman reports that Ailes was promising people he was going to "Make America Great Again" long before Trump voters adorned the saying on red baseball caps, and claims that Trump "comes out of the id of Fox News," and is the ultimate testament to Ailes' legacy.

Ailes and Trump had been friendly for decades, and that friendship has manifested in the Trump presidency. Without Ailes or Fox News, it's possible that no one would have ever been forced to live under President Donald J. Trump

More like this
Does 'Locke & Key’s Ending Mean There Could Be A Season 4?
By Sophia Moore
Everything To Know About 'Loot' Season 2
By Kadin Burnett
Steve Martin Hints That He May Retire After 'Only Murders In The Building'
By Jake Viswanath
Here’s The True Story Behind 'A League Of Their Own'
By Morgan Leigh Davies
Get Even More From Bustle — Sign Up For The Newsletter