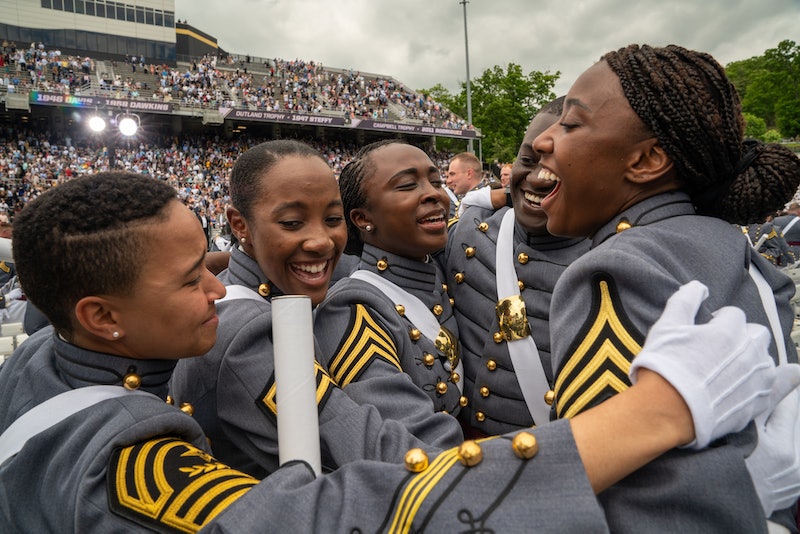 More than five years after being ordered to diversify its student population, a record number of black women graduated from West Point on Saturday. A total of 34 black women cadets have graduated from the academy with Bachelor of Science degrees and commissions as 2nd lieutenants in the U.S. Army, the Huffington Post reported.

"I just showed myself and those who thought I couldn't do it initially that yes, I can," graduating cadet Stephanie Riley told TIME magazine. "And not just, 'yes, I can.' I can show other little girls that yes, you can come to West Point. Yes, you can do something that maybe the rest of your peers aren't actually doing, and yes, you can be different from the rest of the group."

The military academy told CBS News that this year's graduating class was the most diverse West Point had ever seen in regards to both race and gender. And while this year's record number of black female graduates is certainly an improvement, West Point remains mostly white and mostly male.

According to CBS News, inclusion has come slowly at West Point. While the military academy has a long history, having been established in 1802, its graduating cadets were exclusively white males until 1877. That's when Henry O. Flipper, the academy's first black cadet, graduated. For women, inclusion in the military academy would take even longer. West Point didn't graduate its first female cadets until 1980, the news outlet reported.

In 2013, West Point was ordered to diversify its student body by then-Army Chief of Staff Gen. Raymond Odierno, resulting in the military academy opening a diversity office, TIME magazine reported. According to the magazine, West Point admissions boosted efforts to recruit more diverse cadets by increasing the outreach it did in more urban areas like Atlanta, Detroit, and New York City. "We're beginning to see the fruits of our labors,' admissions director Col. Deborah McDonald told TIME.

But the diversity of West Point's 2019 graduating class has caught the public's attention. A photo of this year's 34 graduating black women posed in uniform in front of the military academy went viral earlier in the month, drawing commentary and congratulations from people around the country, including 2020 presidential hopeful Sen. Cory Booker.

For the women standing shoulder to shoulder in the photograph, the snap represents an important milestone they're proud to be a part of. Graduating senior Jabreal Arrington told NBC's Nightly News it was "overwhelming" to "see all of our sisters, us just standing there in solidarity."