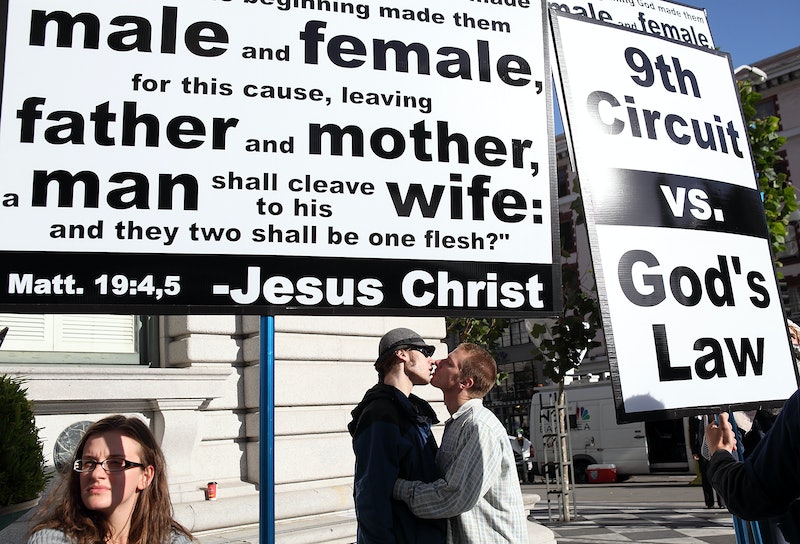 In a blow to efforts to expand protections for LGBTQ Americans under the law, West Virginia's Supreme Court ruled on Tuesday 3-2 in favor of the defense in appeal on West Virginia v. Butler. The case centered around Steward Butler, a West Virginia man who was accused of attacking two men kissing in public, shouting homophobic slurs. The prosecution in West Virginia not only charged Butler with assault, but tried to charge him with a hate crime as well, under West Virginia law that protects individuals from hate crimes based on sex.

The argument of the prosecution was based on the idea that if behavior that was normal for one sex is treated as abnormal for another — like, in this case, kissing a man — then discriminating against someone for that behavior is considered discrimination based on sex.

“If one of the guys had been a woman, this wouldn’t have happened,” says Greg Nevins, employment fairness project director for the LGBTQ advocacy firm Lambda Legal, who filed an amicus brief in support of the prosecution's case. "We're not saying the word 'sex' and the words 'sexual orientation' mean the same thing. But that's not the question. The question is: 'are you treating someone differently because of their sex when you engage in sexual orientation discrimination?' And the answer is obviously yes."

That argument did not win the day in West Virginia. But it's notable how often it is succeeding in other cases around the country.

"What you saw play out in the West Virginia Supreme Court is that temporarily, in one court, the old, discredited approach beat the modern, rising approach."

Nevins notes that the law on hate crimes, which was at play in West Virginia v. Butler, is not quite the same as the law on discrimination which mattered in Hively. But he also says that what we're seeing is an ongoing sea change of how courts around the country treat issues of sexual orientation in relation to sex. Years ago, federal courts had generally ruled against sexual orientation protections.

However, in recent years, that legal interpretation has started to become less common, according to Nevins, and he's confident more courts throughout the country will recognize modern interpretations.

"Now, the federal appeals courts are going, 'Oh, we kind of got that wrong, back in the day,'" Nevins says. "What you saw play out in the West Virginia Supreme Court is that temporarily, in one court, the old, discredited approach beat the modern, rising approach."