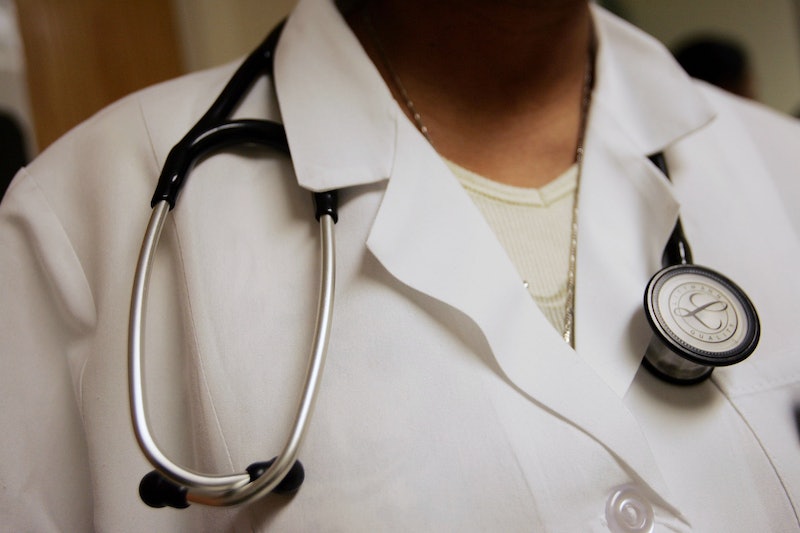 Last month alone, four states passed laws that severely restrict access to abortion services. Alabama's governor signed the nation's strictest abortion ban into law on May 15, banning doctors from performing abortions at any stage of pregnancy unless there is a medical emergency or fatal fetal anomaly. Abortion laws in Louisiana, Kentucky, and Missouri also would ban the procedure early in pregnancy, typically at six or eight weeks, only making an exception for medical emergencies. So it's crucial to take a closer look at what a medical emergency for an abortion means, since its definition typically isn't addressed in the legislation.

Bustle spoke with three obstetrician-gynecologists to find out exactly what this term means. They explain that what constitutes a life-threatening pregnancy isn't at all straightforward.

"Every patient is unique and every situation is different, and there are an infinite number of considerations that could be important," Dr. Kristyn Brandi, M.D., MPH, an OB/GYN in New Jersey and a board member with Physicians for Reproductive Health, tells Bustle.

Dr. Jen Gunter, an OB/GYN who wrote an op-ed in The New York Times on the confounding vagueness of the term "mother's life at risk" that is prevalent in recent restrictive abortion legislation, expressed similar thoughts.

"I am an obstetrician and gynecologist trained to do abortions. I do not know how to translate these laws into clinical practice because often the language is preposterously vague and they include terms with no medical meaning," she wrote in the op-ed. "For example, [Alabama's] legislation does not define what constitutes a 'serious' maternal medical condition nor how 'serious' it must be to prompt intervention."

Dr. Andrew J. Satin, M.D., an OB/GYN and director of gynecology and obstetrics at Johns Hopkins Medicine, tells Bustle that under certain conditions, continuing a pregnancy could significantly increase the morbidity risk for the pregnant person or even jeopardize their life.He says that for people with certain cardiovascular disease conditions, like Eisenmenger's syndrome and pulmonary hypertension, carrying a pregnancy could cause as high as a 40% risk of maternal death. Satin also cites bleeding abnormalities, various cancers, and ectopic pregnancies (a pregnancy that occurs outside the uterus, typically in the fallopian tube) as conditions that could place a pregnant person's life at risk.

"There is no situation in medicine where we ever wait for people to get sicker before we do something to make them better."

People who don't wish to be pregnant and have conditions that put them at risk of needing an emergency termination in the future often obtain abortions before their situation becomes truly dire, says Dr. Anne Davis, M.D., an OB/GYN and consulting medical director at Physicians for Reproductive Health. Davis cites people with diabetes, hypertension, and histories of previous high-risk pregnancies as examples of those who may seek an abortion to avoid a potentially life-threatening situation. These conditions can sometimes be exacerbated — and pose more of a risk to the pregnant person's life — the longer a pregnancy continues.

None of the aforementioned extreme abortion bans have gone into effect yet, so early termination before the point of a true life-threatening emergency remains an option for people who can access it. For that reason, Davis tells Bustle "we don't do very many abortions for people who are very sick." However, she stresses that this could change with the wave of new state laws, which, if and when they're allowed to take effect, would essentially force doctors to wait until their patients are facing a dire medical crisis in order to end a pregnancy.

"There is no situation in medicine where we ever wait for people to get sicker before we do something to make them better," Davis says. "It's so counter to everything that we do."

Brandi shares similar concerns about the impact of the restrictive laws. "I regularly see patients with urgent, complex conditions," she says. "As a physician, I do everything in my power to prevent a patient’s health from deteriorating, not to wait until the condition gets so bad that it warrants treatment under the law."

Overall, the OB/GYNs tell Bustle that determining what constitutes a life-threatening pregnancy is a nuanced and complex process. Some argue that laws that stand to interfere with the intricate personal and medical decision-making required in this process may put women's lives at risk. Restricting abortion access is "playing with fire," as Davis puts it, and could potentially cause a lot of "preventable harm."