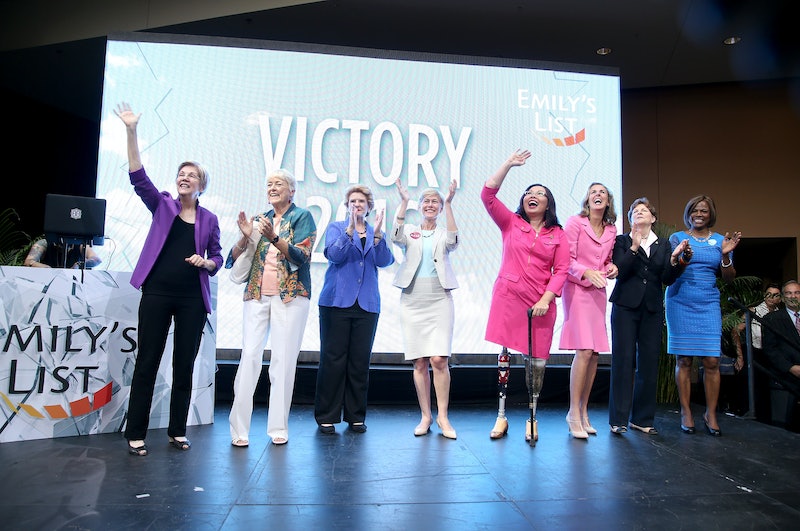 Jess Phoenix isn't afraid of a challenge. A geologist who studies the formation and eruption patterns of volcanoes, Phoenix’s work has taken her to some of the most remote and dangerous parts of the planet. But this spring, she decided to tackle a new challenge: Phoenix is part of a small but growing contingent of American women who have chosen to run for office since the 2016 presidential election.

In April 2017, Phoenix, a Democrat, announced her plans to run for California’s 25th Congressional District, a district that, despite going for Hillary Clinton in 2016, has been held by Republicans since 1990. Today, she will run against Steve Knight, who’s been described as “the most vulnerable incumbent in California," and potentially make it to Congress — a place where she hopes "I can make a very big impact and really start to make a difference for people really soon.”

Phoenix is part of what many hope will be a new, rising wave of female legislators. But getting more women in office isn't just about increasing gender parity in the U.S. government; when women get involved in the government, they actually change how it functions, in a way that benefits women, families, and the country at large.

How Female Politicians Change The Government

Female legislators, by and large, govern differently than their male counterparts. Women, in all parties, are more likely to focus on issues relating to women, families, children and social welfare. According to a 2011 study in the American Journal of Political Science, female Congress members secure roughly nine percent more spending from federal discretionary programs than their male colleagues. Women also sponsor and cosponsor significantly more bills than male congressmen. A 2010 study conducted by the Center for the Study of Democratic Institutions discovered that the average minority female representative in Congress has “a 29 percent greater volume of sponsored legislation reaching the floor of the House and 30 percent more laws resulting from her sponsored legislation than does the typical minority party man.” Additionally, districts that elect women to the House of Representatives receive about $49 million more each year.

"We get more things done. We don't stand on ceremony."

More research published in the Journal of Politics found that women at the state assembly level are more likely than men to push for rehabilitation programs instead of punitive policies, and that female city council members spend more time doing constituency service than their male members.

“Women are more effective in public office than men,” Letitia James, New York City’s public advocate, and the first woman of color to hold citywide office, tells Bustle. “We get more things done. We don't stand on ceremony. I think most of the women that I work with, our focus each and every day when we wake up is, how can we improve the life of someone today?”

This isn't just theoretical — recent political history is full of examples of female politicians who seem to prioritize getting things done. While Arizona Senator John McCain was the name in the news when it came to opposing President Trump’s health care bill, two female senators — Republicans Lisa Murkowski of Alaska and Susan Collins of Maine — were the first to voice their opposition to repealing the Affordable Care Act without having replacement legislation on the table.

Four years earlier, when the government was on the brink of a shutdown, it was also Collins who presented a three-point prevention plan and rallied support from across the aisle. The first three Senators to reach out in support? All women — Murkowski, New Hampshire Republican Kelly Ayotte, and Amy Klobuchar, a Democrat from Minnesota.

“I’ve always thought that was significant,” Collins later told the New York Times. “And indeed, we put together a plan for the reopening of government, and women led the way.”

Deborah Glick regularly works across party lines in her role as a Democratic member of the New York State Assembly, and firmly believes that more women in power would lead to better outcomes across the board, particularly in education and healthcare.

“What we try to do is find issues that we agree on,” she tells Bustle. “We’ve worked on increased funding for breast cancer [research]. We've worked on some childcare issues. We try to find issues where women are the group most impacted where we can agree on some solutions.”

Glick notes that the professions most impacted by budgets are ones that employ vast numbers of women, like teaching and health care: "Nobody ever thinks that you can cut or make changes in law enforcement or defense, but they're totally happy to mess with education and cuts to healthcare at the lower levels.” More women in office likely means more push back against these kinds of attempts to cut funding.

"Even with the gender gap in political ambition, you could certainly identify 435 women to run for office."

New York State Senator Kirsten Gillibrand has also been an ardent believer in the impact of women in elected office — she even founded Off the Sidelines, a PAC focused on supporting women in politics. As she told New York Magazine in April, “Just literally having 51 percent of women in Congress representing the diversity of our country: You would have different issues raised, different solutions being offered, you’d have less partisan bickering. Because our disposition is to help.”

Of course, before women can win elections and change the government, they need to run. Though women make up a more significant share of national and state lawmakers than ever before — the US Congress includes nearly 15 percent more women than it did in 1989, according to 2015 research from the Institute for Women’s Policy Research — there's still a long way to go. Only 19 percent of members of Congress and 25 percent of all state legislators are female. Since the 2010 congressional elections, we've has actually seen the first net decrease in the percentage of women serving in Congress since the 1978 midterms. Only six states have female governors.

That looks particularly stark in comparison to countries like Rwanda, which has a Parliament that’s 61 percent women, as well as Sweden, South Africa, Angola, and Cuba, which all surpass the U.S. when it comes to women in office.

Our numbers are surely influenced by the fact that there are few initiatives in place to get women into office. 19 countries in Europe, 13 in sub-Saharan Africa, and 11 in Latin America have applied some form of quota which mandates a certain number of women in legislatures and create laws or incentives for the recruitment of female candidates. Nothing like that exists in the United States.

None of this means that the U.S. lacks qualified women — we just lack the infrastructure to encourage them to run. “If the parties decided that they wanted to recruit female candidates, they could find one in every single congressional district. Even with the gender gap in political ambition, you could certainly identify 435 women to run for office,” Jennifer Lawless, director of the Women and Politics Institute at American University, tells Bustle. “There’s just no incentive for them to do so and no premium that’s placed on it.”

There are also a lot of roadblocks that prevent women from seeing themselves as politicians. A 2012 report from American University's Women & Politics Institute identified a few primary reasons why women don’t run, including that women believe the electoral environment is both highly competitive and biased against female candidates and, most frustratingly, that women don’t feel they’re qualified.

"We need to get young girls to understand that they should not be afraid of power or being smart."

As Lawless — who is also one of the co-authors of the report — explains, many women still perceive running for office as something not within reach of an ordinary person: “In a wide range of professional settings, politics included, women do seem to be more risk-averse, and doubt their confidence to succeed in male-dominated environments.”

“We often invite groups to visit the City Council when they're in session, and I always make it my business to invite young girls up to the rostrum and to have a seat in the chair of power — to get a sense of what it's like to preside over a legislative body,” says James. “We need to get young girls to understand that they should not be afraid of power or being smart.”

Of course, once a woman has overcome these challenges, she must then figure out what office to run for, and perhaps most importantly, how to get on the ballot — something that Zainab Baloch, a 26-year-old from Raleigh, N.C., discovered when she decided to run for city council earlier this year. “It’s very hard to find rules, and the process is not easy at all, especially for someone who’s never run,” Baloch tells Bustle.

“Even when a woman has sort of started to explore the idea of running for office, it is really daunting to dive in and tackle what those first steps look like,” Erin Loos Cutraro, the founder and CEO of She Should Run, a non-partisan organization that offers resources to women considering political office, tells Bustle. “When women do step into the space of considering a political journey, they are not greeted with the same traditional boy's club network that men experience when they run for office."

Why You Should Run

But, Loos Cutraro notes, women interested in running aren't on their own — there are resources available to help women navigate these steps: ”Organizations like She Should Run, Emily’s List, the Women’s Campaign Fund, Run for Something, and others, serve to bridge this gap, offering communities and resources for women looking to take those first steps to run for office...There are tremendous training programs. There are programs that help women make the connections that they need to run. There are programs that help women raise money. There are PACs.”

Should we ever reach that coveted 50 percent representation, Loos-Cutraro thinks we’ll have the most robust government possible. “It doesn't mean we will reach perfection. But there will be no question that we have, at that point, tapped the full talent pool that our country has to offer.” In the meantime, we can make sure that women are aware of the offices and resources available to them and, most importantly, help women decide if and why they genuinely want to serve in an elected position.

"I see people like Maxine Waters, and Hillary Clinton and Nancy Pelosi and I say, despite the odds, be like them."

Despite the challenges of running for office, Baloch is finding the process to be worth it. “There are definitely days where I’m like, ‘Oh my God, what am I doing, this is crazy?’ Then you talk to people and realize how much impact you could have, and it’s overwhelming,” she says. “You realize the importance of having different people in government and [that] people really do want their government to do more for them.”

James advises that women considering a run should channel the spirit of those who have gone before us, as she does every day in her work.

“For me, it's the spirit of Fannie Lou Hamer, the spirit of Barbara Jordan, Congresswoman Shirley Chisholm, and then I see people like Maxine Waters, and Hillary Clinton and Nancy Pelosi and I say, despite the odds, be like them,” she tells Bustle.

“Be like all of the she-roes whose spirit runs through your veins, listen to them. Don't listen to that spirit that questions you.”