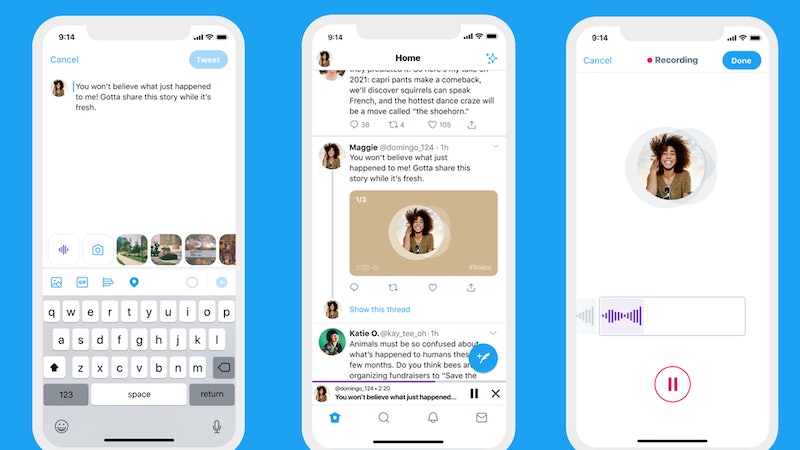 If you made a list of the features Twitter is missing, recording audio tweets probably wouldn’t even crack the top 10. So, of course, that is the newest feature the platform is introducing. On June 17, a company blog post announced that Twitter is starting to roll out audio tweets, allowing users to post content consisting of a recorded voice message.

An audio tweet is... exactly what it sounds like. Rather than type out 280 characters, the new feature lets you record an audio message on Twitter by selecting the new wavelength icon when you compose a tweet. (It should appear next to the camera icon when you’re writing a tweet.) Each audio tweet can last 140 seconds, an homage to Twitter’s OG character count. If you go over the allotted 2 minutes and 20 seconds, Twitter will automatically create another audio message to start a thread. Then, you’ll tap “done” and post your tweet.

The audio tweet feature is currently only available to some iOS users and will continue rolling out to all users in the coming weeks. So, if you don’t see the wavelength icon yet, fear not. You too will be able to share 140 seconds worth of audio soon enough.

The audio tweets will appear in your timeline like any other tweet. They’ll look like an embedded video where the video is just a static image user’s current Twitter avatar. (If you change your avatar, old audio tweets will display the avatar you had at when you posted the tweet.) You’ll be able to play and pause the audio as you would any other Twitter video. Audio tweet threads recorded in one go will also have a number at the top (e.g. “1/3”) making it easier to listen in order.

Like with embedded videos, you’ll also be able to add text to your audio tweet. So, you can give context to the audio tweet through an additional typed message or just a string of emojis. Additionally, on iOS only, the audio playback will start in a new window at the bottom of your timeline, like other Twitter videos. So, you’ll be able to listen to the audio and continue scrolling through your newsfeed.

Currently, the feature can only be used when posting original tweets. So, you won’t be able to reply to someone else’s tweet with an audio tweet. (If you heard something, that was a collective sigh of relief from everyone worried about hearing 140 seconds of Reply Guys in their mentions.)

The new feature is meant to “add a more human touch” to your Twitter experience, according to the company’s blog post. However, some have criticized the lack of accessibility for users who are deaf or hard-of-hearing. Currently, the feature doesn’t include users to add closed captioning to their audio tweets. Twitter Support responded to a tweet saying, “This is an early version of this feature. Making these types of Tweets accessible to everyone is important and we’re exploring ways to make that happen.” However, they haven’t specified when or how additional accessibility features will be added.

It’s unclear how audio tweets will bolster the platform besides giving people another Twitter feature to dunk on. Everyone from Cardi B to Lil Nas X has already found a way to use the new feature. Will you?