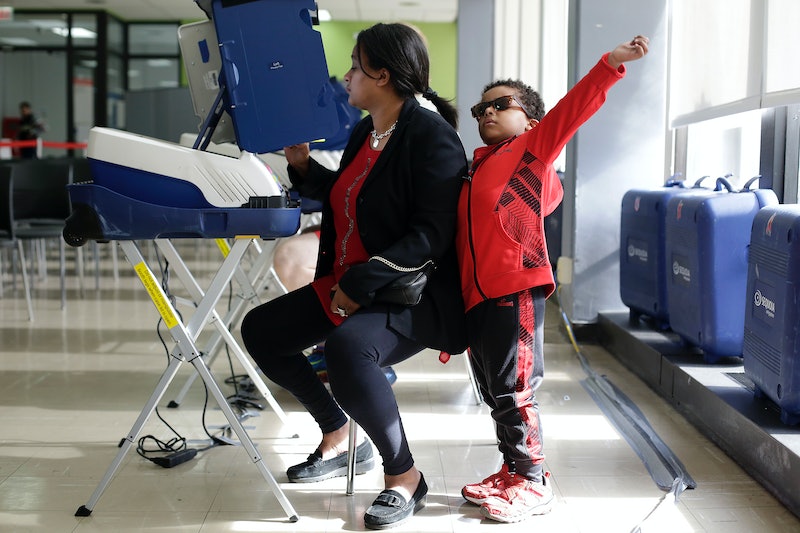 With ten months to go before the 2018 midterm elections, Democrats say they've formulated a game plan that will lead to sweeping victories — and it relies on getting more women into office and to the polls. That includes women who rallied against President Trump during the Women's March and formed the base of #TheResistance over the course of his first year in office, as well as those who supported Trump's bid for the White House, but are now disappointed with his job performance. An unprecedented number are running for office themselves.

"Women are more engaged in the political sphere than ever," Elizabeth Renda, the women's media director for the Democratic National Committee, tells Bustle. "They're getting involved on the ground level as organizers, volunteers, and activists, and they're running for office in record numbers."

As of last month, 369 women were planning to run or had taken steps toward running for a seat in the U.S. House — the highest number ever. Couple that with a record 79 women running or considering a run for governor, an executive role that's been traditionally hard to crack for women in politics. This year's female candidates for governor will likely double the previous record of 34 women set in 1994.

The DNC is putting money into helping first-time women candidates through the Every ZIP Code Counts program, which grants $10,000 a month to all state parties through 2018. That's a 33 percent increase in base funding over 2016. The DNC also refers would-be candidates to advocacy groups like EMILY's List, IGNITE, Emerge America, and She Should Run.

"The Every ZIP Code Counts program allows the DNC to be a stronger partner with our state parties so they have the funding and resources they need to elect Democrats up and down the ticket in every community in 2018, 2020, and beyond," Renda says.

In Michigan, Democrats are considering running a woman candidate for every single statewide office on the ballot in 2018. "We feel like we, at the state legislative level, led the wave," Jessica Post, Executive Director of the Democratic Legislative Campaign Committee, tells Bustle. Indeed, since the 2016 presidential election, Democrats have flipped 33 state legislative seats from red to blue over the course of the year, and are 13 seats away from flipping seven chambers.

"Everything is on the table," Post says. "We need to prepare to have big levels of support from grassroots activists across the country."

Democrats fared better than expected last year after suffering a drubbing during the 2016 presidential election, when Trump won states that were thought to be safely in Hillary Clinton's column. That included Michigan, a state Barack Obama won in 2012 by 9.5 percentage points, and Pennsylvania, which went to Obama by nearly 5.5 points. Since then, Democrats have outperformed expectations in more than 70 special elections held in 2017 — and some call it a sign of a Trump backlash brewing.

Every day, women see that their rights are under attack by Republicans and the Trump administration. They've seen Republicans try to defund Planned Parenthood, rip away access to health care for millions of Americans, roll back access to birth control, and consistently put the 1 percent ahead of the middle class. It's no wonder why we're seeing women standing up and raising their voices for Democratic leaders who will actually fight for them, and even running for office themselves. Women are paying attention, and they're rising up to make their voices heard.

Democrats and Republicans are bracing for bitter midterm battles this year, as voters get ready to reinforce — or reject — the Trump agenda. Republicans are hoping voters will reward them for passing sweeping tax cuts at the end of 2016. But President Trump maintains a historically low approval rating, especially among millennials. Democrats, who say they feel they're riding a wave off recent election wins in Alabama, Virginia, and New Jersey, are poised to capitalize on that disillusion.

"You can't call this a fluke, it's a trend," Renda says. "Americans are fed up with the Trump agenda that Republicans in Congress have embraced, and they're showing up to vote for Democrats."

That's especially true among women voters, whose support for Trump has declined over his year in office. According to a Monmouth University poll conducted in December, only 24 percent of women approve of Trump's job performance, down 12 percentage points from September. In particular, Republican women's support for the president has declined by 9 percentage points in that same period of time. Among independent women voters, the reality is even harsher for Trump: only 14 percent approve of the job he's doing, down 25 percentage points in three months.

How Trump Shot Himself In The Foot With Women In Alabama

One reason for the sharp decline may be Trump's endorsement of Republican Senate candidate Roy Moore in Alabama. In an unconventional mid-December special election, Doug Jones, a pro-choice Democrat, beat Moore after a group of women publicly accused Moore of hounding and molesting them when they were teenagers and Moore was in his 30s. Trump ultimately endorsed Moore after originally backing his primary challenger.

"Our success in 2017 is proof that when Democrats lead with our values, support great candidates like Doug Jones by organizing and investing early, and engage millennial and women voters — especially African-American women — we can win anywhere," Renda says.

Why Getting Women Into State-Level Office Is So Crucial

This year's midterms are especially consequential, as the lawmakers who are elected to four-year terms in 2018 will draw the legislative maps in 2021. State legislatures draw those maps in a majority of states; where they don't, a court or a nonpartisan commission does the job.

"[If] you're wondering why can't we impeach Trump, what's going on with the rubber stamp on Trump's agenda, why aren't members of congress being held accountable for this terrible vote on their tax bill, and why can't we get Democratic control of Congress — and the continued challenge on that is Republican gerrymandering," Post says. "That's why there's extremism in Congress, that's why these terrible bills are passing through Congress, that's why we can't get anything done on a positive level."

A group of Democratic state legislatures have been taking the lead in resisting the Trump agenda below the federal level. Oregon lawmakers voted to expand residents' access to birth control. In Washington, the state Senate is pushing a voting rights act. The New Mexico state legislature introduced a bill that would prevent its land from being used to build a border wall. California lawmakers earmarked $30 million in legal and financial aid for Dreamers after Trump announced he was canceling the program that allowed them to remain and work in the United States.

Beyond those issues, raising the minimum wage, strengthening gun control laws, and expanding Medicaid are all within states' control.

"The states are really the only firewall we have right now against Trump," Post says. Democratic Party leaders say they hope electing more women to local government will lead to reforms that are tailored to each community, building a blue wave for years to come.