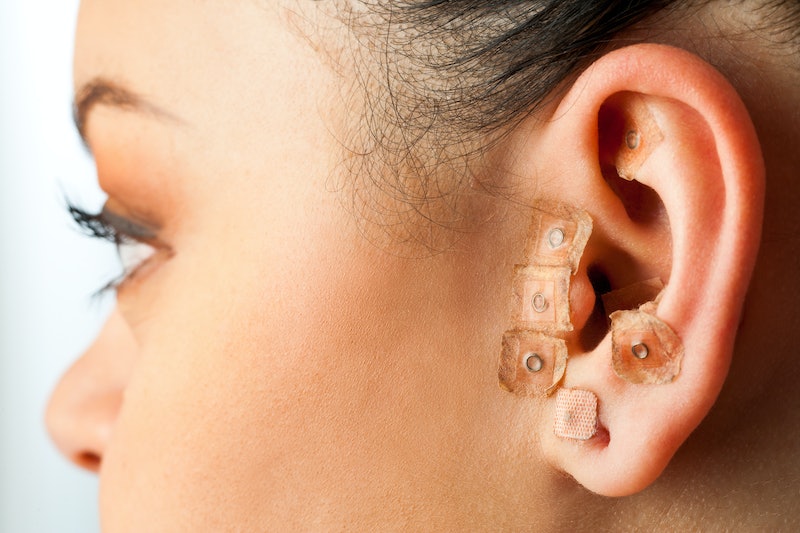 As someone who has tried acupuncture for pain (specifically migraines), I can attest to the benefits of this particular form of traditional Chinese medicine (TCM). But a relatively new treatment claims to do the same thing, minus the needles. It uses an invention called ear seeds. And since the remedy was made commercially available in the UK, people can't stop talking about it.

Ear seeds resemble tiny balls. Attached to a see-through sticker, they are designed to be placed on specific parts of the ear. When pressed with a finger, they reportedly do everything from relieving anxiety and chronic pain to helping issues involving sleep and addiction.

To understand how they work, you need to understand a little bit about acupuncture. As Chinese medicine practitioner Olivia Inge explained to Cult Beauty, TCM revolves around the idea that the human body houses a number of pathways called "meridians". Energy, known as "Qi", flows through these pathways. Any bodily problem or imbalance is said to result in an energy blockage, causing pain and/or other specific symptoms.

These symptoms help acupuncturists determine which organ is involved and, using a map of hundreds of acupuncture points, insert needles in specific places to alleviate the problem. Ear seeds are now also used by acupuncturists, either as a standalone treatment or as a DIY method between appointments.

Rather unsurprisingly, these little seeds directly relate to ear acupuncture. This combines both ancient Chinese thinking and a more modern theory developed by Dr. Paul Nogier in the 1950s. Now, experts believe there are hundreds of acupuncture points in the ear alone, writes acupuncturist Aimée Derbes.

Little research exists to back up many of the ear seed claims, so you'll have to rely on anecdotes. In 2015, a review of 15 studies did find that ear acupuncture, together with ear seeds, appeared to reduce insomnia symptoms. But researchers noted that no real conclusions could be made until stronger studies were set up.

There is a supposed connection between "the vagus nerve and ear acupuncture," Dr. Stephen Chee told Shape. This nerve is linked to the parasympathetic nervous system, which can halt the body's fight or flight response. "Pressing the ear seed is like pushing on the brakes," Dr. Chee explained.

The most popular ear seeds are Vie Healing's 24k Gold Ear Seeds. According to the company, "applying pressure to the external ear stimulates [four] nerves, which relay to the central nervous system, stimulating neurotransmitters that relax and reduce pain."

Now available at Cult Beauty for £29, the gold seeds are sold in a pack of 20. Each pack comes with a handy diagram, showing where to place each seed depending on your ailment. All you have to do is grab a pair of tweezers and gently stick the seeds on.

A few times a day, "stimulate" them by massaging seeds in a circular motion for one to three minutes, advises Healthline. Each seed can last for up to a week, but Vie Healing recommends changing them every two to three days.

If the DIY approach sounds right up your street, it's always best to visit a qualified acupuncturist first. Not only will they be able to give personalised advice on where to place the ear seeds, but they'll also offer other treatment tips.