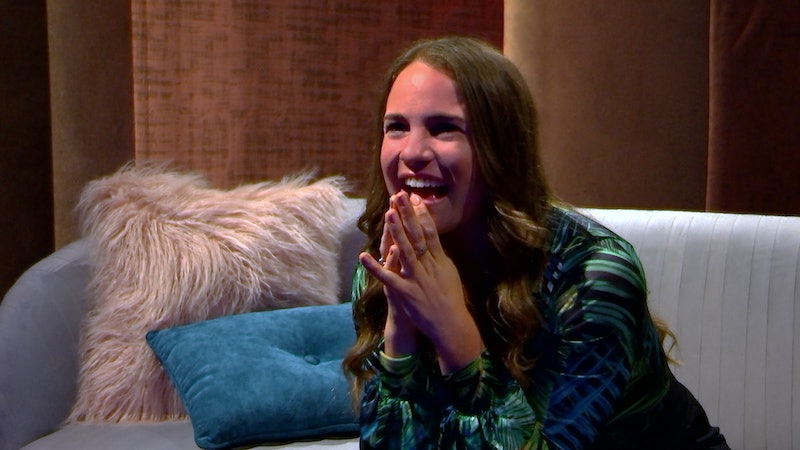 With her wedding fast approaching on Love is Blind, Kelly has been having doubts about whether or not she really wants to say "I do" to Kenny — understandably so, considering she just met him a month ago, and accepted his proposal before ever seeing him. Thursday's Season 1 finale will confirm if she really walked down the aisle, or if she walked away from the relationship entirely. But there's also one major clue on social media that Kelly and Kenny don't end up together.

Though it's promising that they each follow each other on Instagram and Twitter, Kenny's social media accounts reveal that he no longer lives in Atlanta, where Love Is Blind was filmed and where Kelly still seems to live. Kenny now lives in Charlotte, North Carolina, where he's been working as a sales manager for Team Lightning since October 2019, according to his LinkedIn profile. (He also wrote on a fundraising site for Brawl for a Cause that he'd recently relocated to Charlotte, so there's no mistaking this one.)

It's possible that Kenny and Kelly are making it work long-distance, or that she has plans to join him in Charlotte at some point. But the more likely scenario is that the two split, either on the show or afterward.

This is further evidenced by an Instagram post Kelly shared on Jan. 19, in which she encouraged her followers that it's OK to be single in your 30s. "As we begin to love OURSELVES and bring awareness to why we feel sad, or defeated that we are in our 30's and no one has put a ring on it, we can truly understand that we need to change beliefs, stories, and actions to create a diff outcome," she wrote, "I love myself so much that I won't just be with a guy bc I'm lonely."

That's not to say it's impossible that the two are still together. Kelly may have been speaking broadly about how she kept a positive mindset before meeting Kenny. Plus, Kenny recently shared an Instagram picture of him walking around Washington, D.C. which he cryptically captioned, "Who's behind the camera? Check back in a couple days." That could be his way of teasing that it's Kelly behind the camera — or just his way of stoking fan speculation. Either way, it won't be long until we find out.