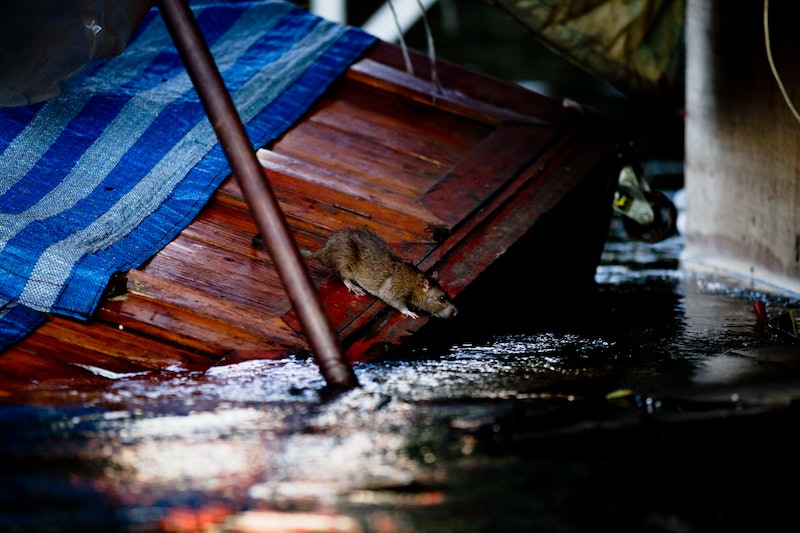 Rats are wreaking havoc on Louisiana's coastal wetlands — but these aren't your average rats. Weighing in at up to 20 pounds, with sharp orange teeth, webbed back feet, and an appearance more like that of a beaver than a sewer rat, the nutria is quite literally chewing up Louisiana coastland. According to the state's Department of Wildlife and Fisheries, nutria have damaged tens of thousands of acres of marsh since the department began tracking their impact on the environment in the late 1990s. But with the help of local residents, Louisiana is fighting back against this invasive species.

While nutria may appear harmless and cute (if you like giant rats, that is), they're doing considerable damage. Considered a non-native species as they originally hail from South America, the nutria were reportedly introduced to Louisiana's marshes sometime in the late 1930s. Initially, the international fur trade proved a convenient way to keep the invasive species' numbers in check. However, when demand for fur shrunk considerably at the end of the 1980s, so too did nutria population control efforts.

As herbivores, the nutria's diet consists mainly of vegetation. And according to the Louisiana Department of Wildlife and Fisheries, these oversized rats are chomping their way through the state's much-needed marshland with ferocious appetites. As the nutria graze on the grasses and plants that keep marshlands from becoming open water, they tend to eat or tear up the roots that help hold marsh soil together. In doing so, the nutria have left Louisiana's marshland more vulnerable to soil erosion as such loose soil is easily carried away by the tide.

Louisiana's Department of Wildlife and Fisheries estimates nutria are currently impacting approximately 6,008 acres of wetlands. That's a considerable drop from the more than 80,000 acres estimated to have been damaged by nutria in 1998 following the department's first coast wide nutria herbivory survey.

But the wetlands are invaluable, especially to Louisiana, and damage to 6,000 acres still leaves an significant impact on the state. Along with providing a distinct ecosystem habitat, research has also found the wetlands work to protect coastal cities and property from hurricanes, storm surges, and rising sea levels by reducing flooding damages. This means that in their overgrazing, the nutria are essentially eating away at Louisiana's natural shield, leaving the state more vulnerable.

Yet efforts to slow the erosion and restore the state's coastal marshes are ineffective if the nutria population is left unchecked. Due to their large size, the nutria have few natural predators. Add that to their busy reproductive season — a female can birth up to three litters of between four and 12 baby nutria every year — and you have a recipe for disaster. That's why the Louisiana state government has been running the Coastwide Nutria Control Program since 2002.

Through the program, the state pays registered participants $5 per severed nutria tail as a means of encouraging local hunters to assist in efforts to control the rodents' population numbers. This year, the 2017-2018 open trapping season begins Nov. 20, and Louisiana's Department of Wildlife and Fisheries is hoping to encourage the harvest of up to 400,000 nutria from designated areas along the state's coastal region.

To further encourage the harvest of nutria, the state also runs a Nutria For Human Consumption campaign which seeks to promote nutria as an inexpensive, high-protein, and low in fat meat. Nutritional information for nutria meat as well as a variety of recipes are available through the campaign, which promises nutria has "a delicious game flavor similar to rabbit."

Nutria can also be found in parts of Florida and Texas, where the nutria are also considered to be an unwanted species. However, efforts in those states to trap nutria or reduce their population numbers don't appear to be as aggressive as those currently underway in Louisiana.