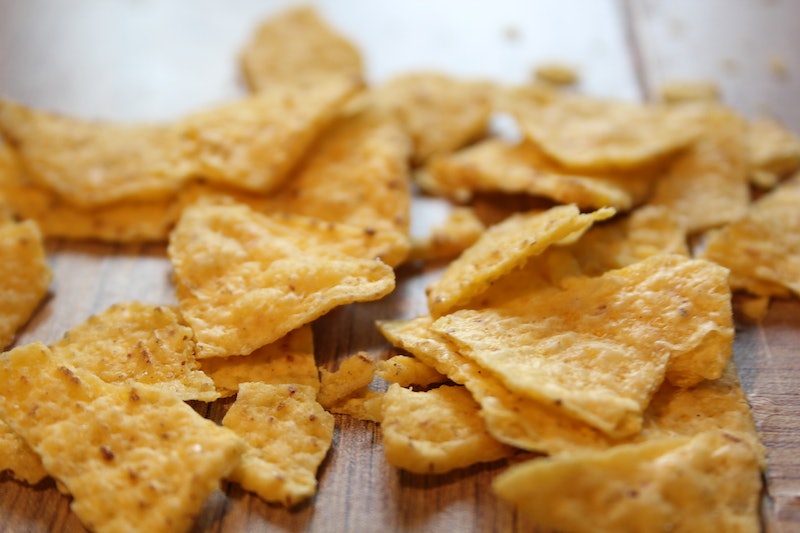 A certain dorm room staple has gotten a makeover worthy of a '90s teen movie. Last week, Frito-Lay introduced organic Doritos, along with all-natural versions of numerous other chip brands, to the world as part of its preservative-free snack line, Simply. If you listen closely right now, you can hear the sound of thousands of college students-turned-health-conscious twentysomethings rejoicing at the news.

According to Grub Street, the Simply line now offers versions of 11 well-known chips, including white cheddar jalapeno Cheetos, sea salt Ruffles, and white cheddar Doritos. The difference between this particular lineup and their traditional brethren lies in the ingredients: Simply products contain "no artificial flavors or colors." Four of them — the aforementioned Doritos and three types of Tostitos corn chips — even meet the criteria to be considered organic, which is a more difficult label to achieve than you may think. Organic food isn't only made with natural ingredients; it has to fit strict regulations enforced by the United States Department of Agriculture (USDA). Basically, organic Doritos are the same orange-dusted tortilla chip you know and love, but made according to the USDA's organic standards. You can check out the ingredient list for yourself here.

Needless to say, this is something of a departure for the kind of snacks that usually require a moist towelette when you're done eating. As Bloomberg News points out, though, it's part of a larger push by Frito-Lay (and its parent company, PepsiCo) to make the products seem healthier to the general public. (Whether the food is actually healthier is up for debate sometimes.) In fact, the new Simply snacks arrived not long after Amazon acquired Whole Foods — and a PepsiCo executive claims they meet the criteria to be sold there.

For now, at least, you won't find Simply products on Whole Foods shelves. Instead, you'll have to purchase them online or look for them at traditional grocery stores, including Kroger, Sam's Club, and Walmart. If all-natural snacks are up your alley, which is probably true of most people, you can head over to the Frito-Lay website for a full list of where to buy them. Say what you will about modern cuisine, but junk food seems to contain much less junk lately.