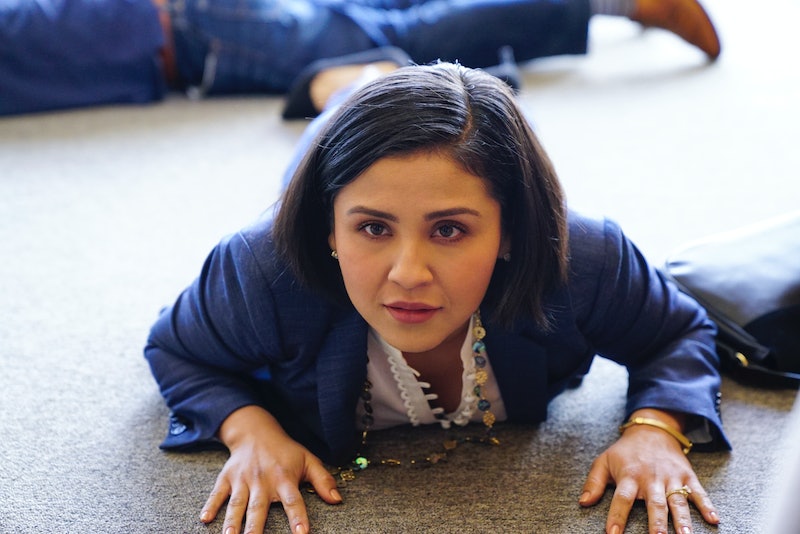 For the answer to this question, I think I'll defer to a true expert, and a host of the show, attorney and author Marcia Clark. Pink collar crimes constitute "one of the fastest growing crime waves in America," the former prosecutor, who was famously on the prosecution team for the O.J. Simpson trial, explained in a CBS video. She described the show's subjects as "PTA moms and society women who brazenly break the law."

Jon Kroll, an executive producer on the show, continued the explanation in the same video. "Pink collar crimes are crimes committed by women who are housewives, PTA moms, school volunteers," he said. Another executive producer, Sharon Liese, noted that the research the team behind the show conducted shows that more women are being drawn to the kinds of criminal acts being highlighted in the show, from embezzlement and money laundering to bank robbery.

Another critical way in which pink collar crimes are different from other forms of criminal activity is that they don't involve murder or violence. That's also how this true crime series distinguishes itself from other crime docuseries available right now.

“We’ve found a new twist on true crime,” executive producer Sharon Liese said in an interview with The Kansas City Star. “Typically in true crime, the thing that hooks people is the murder. Who did it? Why did it happen? We’re really excited to do a series about crimes that don’t turn violent. … The big thing connecting them is they’re committed by women. They’re also kind of absurd.”

So what exactly are the absurd crimes that Pink Collar Crimes will be documenting? They run the gamut from a mom who robbed banks in order to support her painkiller addiction, to a PTA embezzler, to a woman who hired a hitman to murder her business competitors (don't worry, no one was actually killed.) In each of the cases, the women featured are people you would never expect to commit a crime, never mind the kind of schemes these women cook up.

Every episode features interviews with the criminals, as well as the lawyers, victims, detectives, and witnesses involved in the case, per The Kansas City Star. And every episode will also contain analysis and thoughts from Marcia Clark, a true criminal expert. “Marcia heard about the show and basically said, ‘I’m in,’” Liese told The Kansas City Star. “Since she does a lot of serious stuff, she really liked the flavor of what we’re doing, and that it was women and absurd crimes.”

But Liese also noted that many of the women who decided to participate in the show wanted to raise awareness about these pink collar crimes, and the serious consequences that can result from committing them. “People have a lot of remorse about what they’ve done, even though we definitely lean into the irreverence,” Liese said in the interview with The Kansas City Star . “These are cautionary tales. People feel empowered to tell their stories so others can learn from their antics.” After all, just because a crime isn't violent doesn't mean it's not serious.

Pink Collar Crimes will still stand out from other true crime shows, however, due to its mostly lighthearted nature. The crimes aren't insignificant, but they are also slightly ridiculous. It's true crime, but with a little extra pizazz.