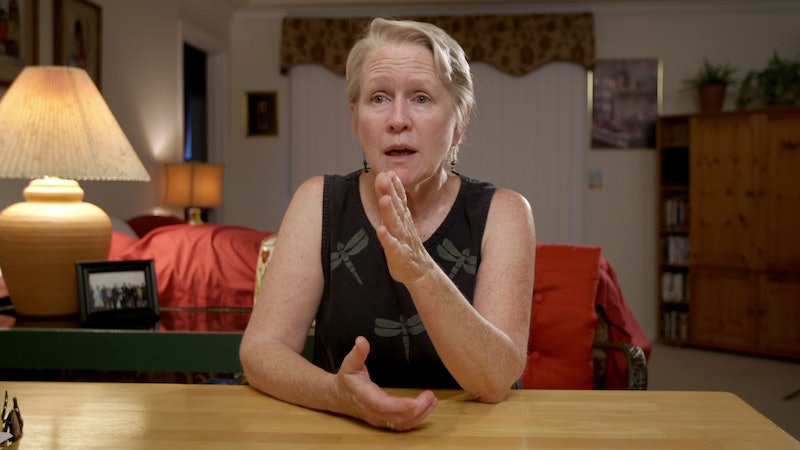 The women who are placed front and center in Netflix's new docuseries The Keepers are speaking out about the alleged sexual abuse they endured while students at Keough High School in Baltimore, Maryland. Coming forward with these types of allegations is never easy — survivors are often forced to contend with a justice system that mistrusts them, and a society that harshly judges survivors. But Jean Wehner and Teresa Lancaster were faced with an added layer of skepticism — for 20 years, Wehner had no recollection of the alleged abuse at all. Lancaster did have some memories, but she didn't utter a word about it because she feared it would devastate her mother, a devout Catholic. As depicted in The Keepers, repressed memories that are recovered are complex and often misunderstood — and, worst of all, they can sometimes be used as a way to discredit victims.

In order to gain a clearer understanding of recovered memories, I spoke with two experts in the field — Lindsey Pratt, a psychotherapist in New York City who specializes in sexual trauma, and Jim Hopper, a clinical psychologist and psychological trauma expert from Harvard Medical School. “It is not at all uncommon to repress some or all of a painful memory, particularly from childhood,” Pratt tells Bustle. "These memory lapses occur in spite of the gravity of the situation, and in fact, often occur because of it — essentially, our brains only allow us to comprehend what we are capable of at that moment without overloading or shutting down."

Hopper emphasizes that these memories aren't "forgotten" — rather, people fail to retrieve them. "Most of the things we remember, we remember them when something else reminds us — not when we’re trying to remember them. Most memories that come to us just pop into our head, for example when a song reminds us of something or we see a particular person. So when we talk about memories, they're retrieved when we encounter retrieval cues and retrieval contexts. We remember through a retrieval triggers, whether it's the cue of a song on the radio or the context of a high school reunion," Hopper says.

In fact, the suggestion of attending her high school reunion was what initially triggered something within Wehner. So she opened her yearbook for the first time in years and saw the faces of her alleged abusers Father Joseph Maskell and Neil Magnus — and that's when memories slowly began to resurface. According to the Baltimore Sun, Maskell denied the accusations until his death in 2001. Magnus died in 1988 before Wehner ever came forward with her allegations.

Bustle reached out to a spokesperson for the Archdiocese of Baltimore who employed both men and oversaw Keough. The Church had this to say about allegations against Magnus: "An allegation of abuse against any priest or anyone representing the Church is deeply troubling and sad. We feel shame and regret for anyone victimized and offer them our sincere prayers and support."

The Archdiocese also issued this lengthy statement acknowledging the accusations against Maskell.

Recovered memories can occur for survivors of all ages who have experienced a variety of traumas. However, certain aspects of this case made Wehner and Lancaster especially likely to experience memory lapses.

When incidents of abuse occur repeatedly, it's easy to assume that would mean a person is more likely to retain the memories. However, Pratt has found the opposite is often true. “In my experience, recovered memories do seem to be more common when the abuse is ongoing. My theory on this is that if a person comes to the realization that long-term abuse is going to be part of their daily life, they must find a way to cope with such a staggeringly difficult reality. This often creates a block in truly processing it. Survivors of long-term abuse must put up a wall in order to survive, and that wall often extends to themselves, as well,” she explains. Pratt also says that, because there's such a stigma surrounding sexual abuse, "a survivor may not understand how to comprehend their trauma and feel deeply ashamed of it."

Hopper says another factor is the perpetrator's relationship to the victim, which could definitely come into play in a priest-and-Catholic-student dynamic. "It’s called betrayal trauma," he explains. "There’s some evidence that abuse by someone who had a lot of power over you at the time, someone you were should have been able to trust to help you, sometimes people will block those out memories more than abuse by someone who didn’t have that kind of power over you because of the risk of exposing it. That can be more important for whether someone pushes aside the memories and eventually stops retrieving them than how many times it happened."

Regardless of whether or not we personally have experienced trauma, Hopper says we can relate it back to our own lives. "The default mode of the human brain is that we're mostly thinking about current concerns like a deadline or weekend plans, and that’s what's running around our heads. When you’re going about your life, if you start to get distracted, you have to push it away," he says. "Well, people do the same thing with unwanted memories — they push them away. These girls didn’t want to think about [the abuse] when they were hanging out with their friends or going to class. People try to push these memories away and some are better at it than others."

Hopper says it starts out as an effort to push it out of your awareness, but then the circumstances of your life change and you're not encountering frequent reminders. Although Wehner and Lancaster remained in Baltimore after graduation, the city itself wouldn't necessarily have been a trigger.

"If they pushed it out of their minds and tried to move on with their lives, then Baltimore itself wouldn’t be a cue. They also had many more memories of Baltimore than the abuse, and had lived in Baltimore without retrieving the memories that they had pushed them aside to focus on other things," he says. "It could take an invitation to a reunion, or for people starting to talk about it. That may be sufficient, but it depends on the person."

This fits with Wehner's experience — she got married and started her own family immediately after completing high school and entered a completely new phase of her life. So, for nearly two decades, she failed to retrieve memories of the alleged abuse. But the mere mention of a high school reunion and a look at her yearbook was enough to begin the process of recovering memories.

The cues are different for everyone. "It’s a failure to retrieve until a person encounters what, for them, is the right cue in the right context. You don’t know for a particular person what’s going to be the cue or context or combination of the two," Hopper says. "When the memories come back, they tend to come back suddenly when the right key goes into the lock."

When Wehner and Lancaster filed a lawsuit in 1994 (under the names Jane Doe and Jane Roe), the Catholic Church's psychiatrist Paul McHugh successfully got it thrown out after arguing that recovered memories are allegedly "false." However, in the years since that case, Pratt, Hopper, and other trauma experts have studied recovered memories extensively — and their explanations about the phenomena make a whole lot of sense, especially in the context of The Keepers.