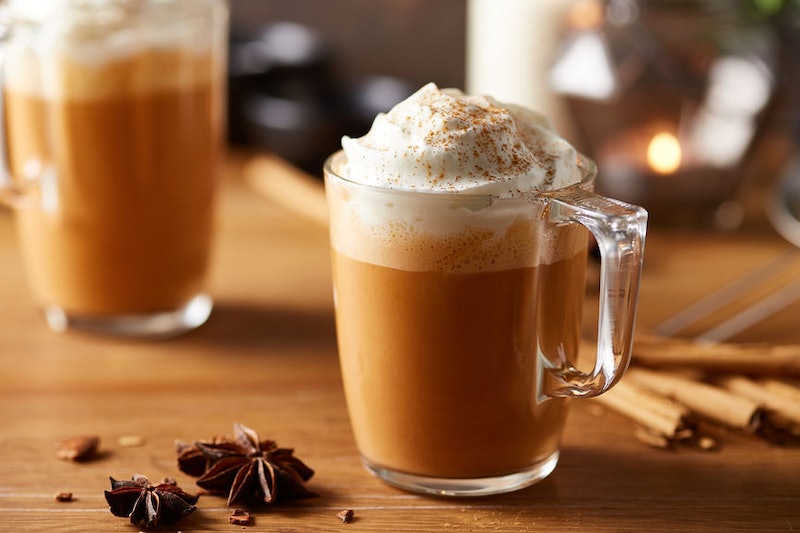 It's Friday, the perfect day to treat yourself to a coffee. But not just your run-of-the-mill Americano, you deserve something a bit extra. The U.S. do fancy coffees so well, and Starbucks' offerings are by far the most popular — but we want to know, what are Starbucks' autumn drinks in the UK?

It's sad to say goodbye to, but there is something oddly satisfying about the recent sunny but slightly chilly mornings, and the fact that you can wear jeans and a long-sleeve top without arriving at the office feeling as though you could do with another shower. While there are many reasons to mourn the end of summer — no more long evenings drinking rosé in the sun, no more tans, no more BBQs in the park at the weekends — there a whole lotta reasons to get excited about autumn. There's the chance to wear that glorious cashmere sweater you splashed out on last winter, all the good TV shows are back (Strictly is returning this Saturday FYI), and my personal favourite, the return of the Starbucks autumn menu.

Fans of maple syrup will love the new additions to the Starbucks menu this autumn, including a maple coffee range featuring a Maple Latte. The drink, which is every bit as delicious as it sounds, is composed of espresso and milk topped with a smoky maple flavour, according to Cosmopolitan. The winter warmer sits alongside a Maple Rooibos Tea — with maple sugar and free from caffeine — and the Maple Cold Foam, which is available for a limited time only from Starbucks' Nitro range, Cosmopolitan reports.

In addition, the Pumpkin Spice Latte — a warming concoction of pumpkin pie-flavoured sauce and steamed milk, topped with whipped cream and cinnamon, nutmeg and cloves — will return to Starbucks' UK menu this season, with a dairy-free, vegan-friendly option being offered for the first time, according to reports by Cosmopolitan.

The Pumpkin Spice Latte in particular has become a phenomenon in its own right. The drink, which even has its own Wikipedia page and is known by fans as the PSL, sold more than 200 million times between the year of its launch 2003 and 2013, according to Starbucks' website. Forbes magazine noted the stratospheric marketing success of the drink, with Debra Donston-Miller writing that "products that are available only for a limited time have a kind of built-in marketing that can grow in impact over time — think Cadbury Creme Eggs."

However, the return of the PSL and the launch of the maple syrup range isn't the only news coming from camp Starbucks. The brand is opening a new superstore in the birthplace of good coffee, Milan in Italy. The Reserve Roastery will skip the likes of Frappuccinos and lattes and focus more on espresso-based drinks; it will also serve local pizza and pastries and alcohol in the evenings, according to The Times. Starbucks in the UK will commemorate this opening with a new coffee for caffeine lovers without a sweet tooth (you're really missing out) called the Cordusio — named for the square where the Roastery is located. A drink for the more hardcore coffee fans, this is a double shot of espresso mixed with mocha and milk, and topped with a cocoa dusting, according to Cosmopolitan.

Autumn, we're ready for you.