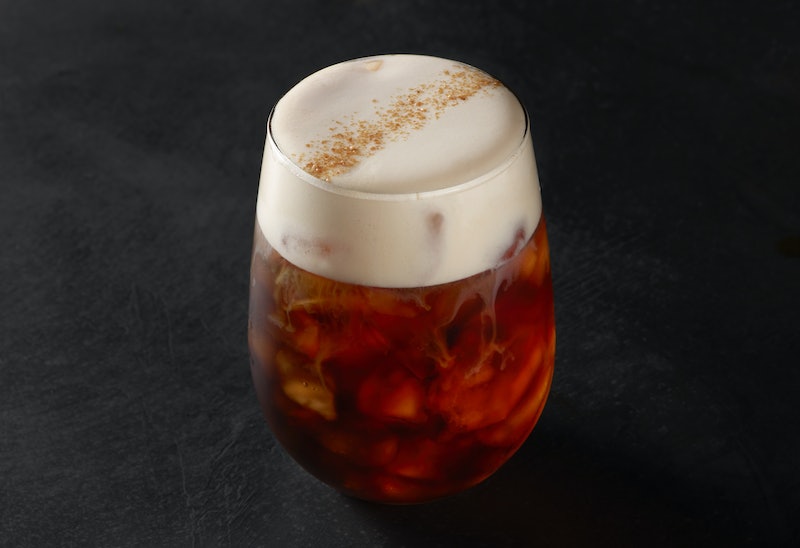 It's been a long, hard winter, and I don't know about you, but I'm ready for the return of something very special: iced coffee season, otherwise known as the time when the weather outside doesn't constantly feel like a walk-in freezer. Of course, you can drink cold brew coffee at any time of the year — but it can be a little tough to fully enjoy the icy drink when you're also shivering from your head to your toes outside, snowflakes dusting your lashes. Thankfully, though, this long winter is nearly over (I hope) — which means that iced coffee will once again be the drink du jour. In an effort to kickstart excitement for this upcoming season, Starbucks has released a new iced coffee option — so if you're a big fan of cold brew, you're going to want to know what Starbucks' new Cold Foam Cascara Cold Brew is, because it's a total iced coffee game changer.

Additionally, along with the introductions of these new drinks, customers can ask for a serving of the cold foam atop any drink of their choice, even if it's not one of the new Cascara Cold Brew options.

As for the new drinks themselves, they're each must-try items for any iced coffee lover:

As its name suggests, this drink features cold brew Cascara blend of coffee — aka, it's coffee that's been brewed cold with Cascara syrup, a sweet blend made from the skins of coffee cherries (you might recognize this name from the Starbucks Cascara Latte). The cold foam on top is also a blend of nonfat milk and Cascara syrup, which adds an extra layer of airy sweetness on top. Additionally, the drink is finished off with a sprinkling of Cascara crystals for a sparkly touch.

If you've never tried an iced cappuccino, consider this your ultimate opportunity to try one. First, your barista brews shots of blonde espresso — Starbucks' lighter roast of espresso that was released earlier this year — then pours them over ice. This is followed by "a splash" of cold milk, as well as a dollop of the cold foam.

Lastly, Starbucks is introducing the Cold Foam Nitro Cold Brew — their popular Nitro Cold Brew (which is a cold coffee brewed with nitrogen for a smooth, chilled taste), topped with their new Cascara cold foam. While this may be the drink that more ~coffee connoisseurs~ might be the most excited for, there's one unfortunate catch: It's only available at Starbucks stores that offer Nitro Cold Brew — you can find a list of those stores here — so you can't get it at every location. That said, it's definitely worth seeking out a Starbucks location that offers Nitro Cold Brew so you can try this drink.

All of the drinks will be available around the U.S. beginning Apr. 17, and are officially part of Starbucks' permanent menu. Happy almost spring!