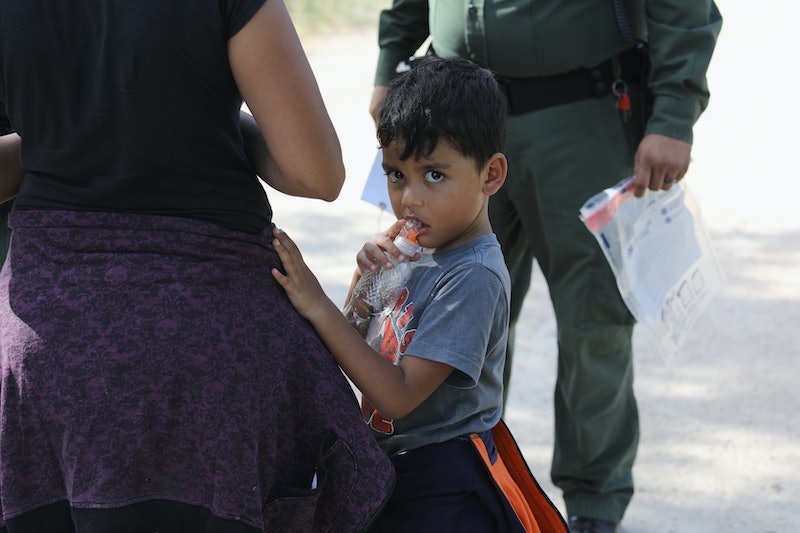 On Tuesday evening, the Associated Press (AP) reported that very young migrant children are being housed alone in at least three institutions, known as "tender age shelters," in South Texas. And many of these children have been forcibly separated from their parents at the U.S. border. In light of this recent news, you may be wondering what exactly tender age shelters are and how they are operated.

According to the AP, Steve Wagner of the U.S. Department of Heath and Human Services indicated that tender age shelters are those that house children under the age of 13. The article reported that, until recently, the location of these shelters has not been known. Now, the AP has identified at least three facilities in Texas — in Combes, Raymondville, and Brownsville. A fourth tender age shelter is reportedly slated to be opened in Houston.

The AP reported that these shelters house some very young children, including babies and those under the age of five. Some child welfare experts have decried the practice of placing such young children alone in institutions, indicating that separation from their parents and institutional housing could have long-term detrimental effects on their health.

Indeed, Dr. Colleen Kraft, the president of the American Academy of Pediatrics, described the potential negative impacts of separating children from their parents to Public Radio International (PRI). The doctor indicated that removing children from their parents' care causes them to experience what is known as "toxic stress." She expounded, saying:

Without that parent to help buffer that [toxic stress] reaction, these chemicals go on to destroy the architecture of that child's developing brain ... They destroy the synapses that occur that result in the ability for that child to love, to learn, to develop. So separation even for a short time is something that's toxic to a child's developing brain.

Kay Bellor, the vice president for programs at Lutheran Immigration and Refugee Service, which provides foster care for migrant children, expressed outrage at the notion of tender age shelters when interviewed by the AP. “The thought that they are going to be putting such little kids in an institutional setting? I mean it is hard for me to even wrap my mind around it,” Bellor asserted. “Toddlers are being detained.”

The AP reported that the Department of Health and Human Services (DHHS), which takes custody of migrant children when they are separated from their parents, pushed back on the notion that tender age shelters are inhumane. As the aforementioned DHHS official, Wagner, told the Associated Press:

We have specialized facilities that are devoted to providing care to children with special needs and tender age children as we define as under 13 would fall into that category ... They’re not government facilities per se, and they have very well-trained clinicians, and those facilities meet state licensing standards for child welfare agencies, and they’re staffed by people who know how to deal with the needs — particularly of the younger children.

The Trump administration announced its "zero tolerance" immigration policy back in May. The policy requires that undocumented immigrants seeking to enter the United States are criminally prosecuted. Because of the prosecution mandate, parents and children are now being separated as they cross the border. Parents are charged with a crime and detained in criminal facilities, while children are not charged and taken into DHHS' custody. Since the zero tolerance policy was enacted last month, over 2,300 children have been forcibly removed from their parents.

As they hold the majority in Congress, some Republican legislators are currently working to develop an immigration bill that would end the family separation practice. However, as TIME reported, thus far they have been unable to agree on the contents of a potential bill. President Trump could also end family separation himself, but has not given any indication that he plans to rescind the policy.