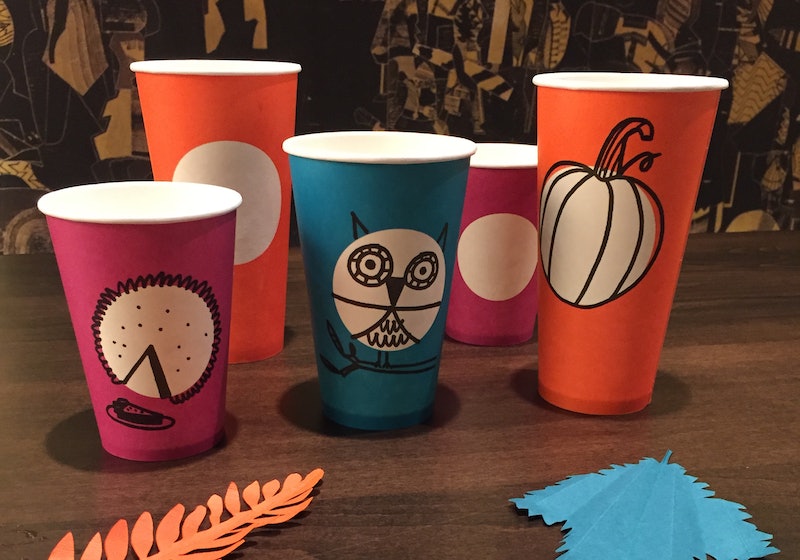 If you're anything like me, you've been counting down the days until holiday cups return to Starbucks. There's just something about receiving your drink in a festive red cup that gets you in the holiday spirit — even if you're somewhere like California where the weather never dips below 70 degrees, even in December. In more recent years, Starbucks has even started releasing seasonal cups to celebrate different seasons, like fall, or holidays like Easter. This year is no different: On Sept. 22, Starbucks will officially release their 2017 fall cups, which are just the right amount of beautiful that they're sure to make their way to your Instagram feed in no time.

Inspired by the vibrant colors of fall, the cups are a magenta for a tall, a blue for a grande, and an orange for a venti. Each comes with either a design on the front — a pie, an owl, and a pumpkin for the tall, grande, and venti respectively‚ or a blank circle that Starbucks encourages customers to fill with their own designs and ideas. Similar to the holiday cups in Dec. 2016, the blank slate cups are designed to be as basic as possible so customers can express their own creativity when building designs on them. After making their cup their own, customers are encouraged to share their designs on social media, whether that's by tweeting them at Starbucks, sharing them on Instagram, or sending a photo in by carrier pigeon (OK, don't do that last one).

Of course, if you're not any form of artiste like myself (I can barely draw stick figures and I've never been able to get over it), you might want to stick to a pre-designed fall cup, which are minimalistic and designed in such a way that it looks like your barista just drew on whatever design with a Sharpie moments before brewing your drink. Seriously, at first glance, you can't tell me that pumpkin on the orange venti cup doesn't look like it was really drawn on with a Sharpie!

Of course, as with all great things, the availability of these fall cups must come to an end at some point. While they'll be available in all U.S. Starbucks stores from Sept. 22 on, they'll only be around until the end of fall, when, presumably, the holiday cups will make their debut to usher in the winter season. So, I suggest not taking these guys for granted — they won't be around very long! If you want to be peak fall, you could even order a PSL, or the brand-new MPL — that is, Maple Pecan Latté — in one of them. Ugh, even if the weather is still 80 degress here in NYC, just thinking about sipping an MPL from that orange venti cup is making me feel like I should be wearing a cosy blanket scarf, boots, and sweater tights in a plaid print because print tights are always better than plain tights, don't @ me.

As for whether or not these cups will become a constant in Starbucks' seasonal cup rotation — aka, whether or not they'll be back next fall with the PSL — that remains to be seen. If they're received well, it's certainly a possibility, but there's no way to tell that right now. So, for the time being, enjoy them, cherish them, design them, photograph them on your social media accounts, and drink cozy drinks from them — like fall, they're going to be fleeting in 2017, so we all need to enjoy them as much as we can while they're around. Preferably, while wearing mittens.