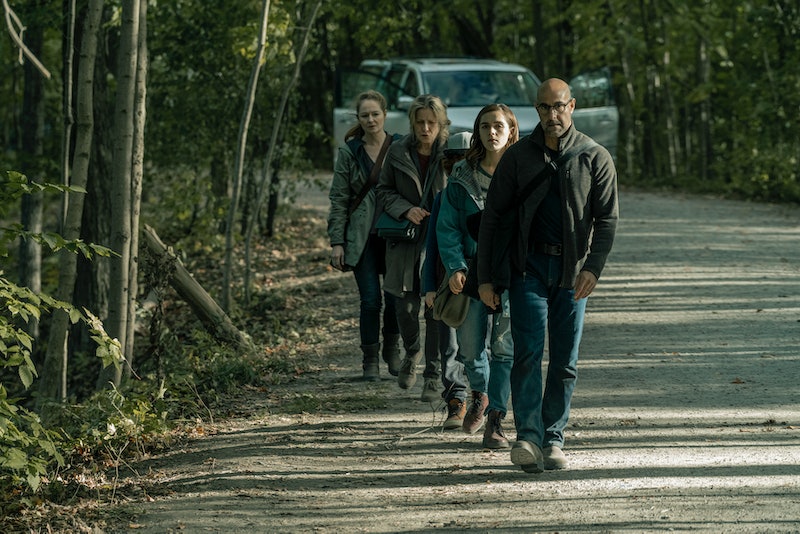 From just the trailer alone, the new Netflix movie The Silence, out April 10, looks terrifying. If you can't stand seeing Stanley Tucci and Kiernan Shipka under attack, look elsewhere. But, if you are intrigued by the spooky (and very familiar...) plot, you might be curious to know more about the monsters in The Silence.

The Silence follows a family fleeing creatures that are hunting and killing people based on sound. Shipka plays Ally, a 16-year-old who lost her hearing when she was 13. According to Netflix's description, while hiding out from the monsters the family "discover a sinister cult who are eager to exploit Ally’s heightened senses."

You don't get a super clear look at the monsters in the trailer, but it is shown that they fly and that they travel in swarms. They look a lot like pterodactyls.

The Silence is based on the 2015 book of the same name by Tim Lebbon, and the overview of the book explains of the monsters, "In the darkness of a vast cave system, cut off from the world for millennia, blind creatures hunt by sound. Then there is light, there are voices, and they feed. Swarming from their prison, they multiply and thrive. To scream, even to whisper, is to summon death."

Of course, the film could change things from the book, but when it comes to the monsters, it sounds like they're kept about the same, with some more research added to make them look realistic on-screen. Mild spoilers ahead.

The productions notes for the movie explain that "an archaeological expedition uncovers a highly evolved species that come to be known as Vesps." The Vesps are found under the Appalachian Mountains and come into the above-ground world by accident, where they start hunting and reproducing quickly. According to the notes, they're called Vesps based on the Spanish word avispa, meaning wasps. While the monsters do swarm like wasps in the trailer, they sure don't look like them.

Producer Robert Kulzer explained, "We wanted to have a creature that felt organic and naturalistic. The Vesps aren’t aliens or creatures from outer space. The species is clearly of reptilian origin." Director John R. Leonetti added that research was done into other creatures that have been found in caves to help with the look of the Vesps. "Their skin is translucent, they have wings and they fly, but they also crawl and lay eggs like reptiles," Leonetti said. "A lot of scientific research went into the design, the creation, and the computer animation of the creatures, right down to the detail of every joint, every vessel, and every move they make."

Now, to address the giant Vesp in the room, The Silence does sound a lot like the John Krasinski-directed A Quiet Place from last year, even if the monsters look very different. There's a family fleeing mysterious creatures that hunt humans based on sound and one of the family members is deaf — it's really, really similar. The big difference seems to be that while A Quiet Place showed only one family, the scope of The Silence will be bigger and explore what's going on beyond the main characters.

Obviously, The Silence book came out three years before A Quiet Place, but A Quiet Place writers Scott Beck and Bryan Woods said the idea was something they were playing around with over 10 years before the movie came out in an interview with their alma mater, The University of Iowa.

Basically, there's no clear answers at this point about whether either story inspired the other in some way — unconsciously or not — and at what point in the production of the scripts and films that would have even been. But seeing as The Silence star Tucci is married to A Quiet Place star Emily Blunt's sister, I would like to know if there was any drama in the Blunt-Tucci-Krasinski family over this. Spill the tea, Bluntucskis.