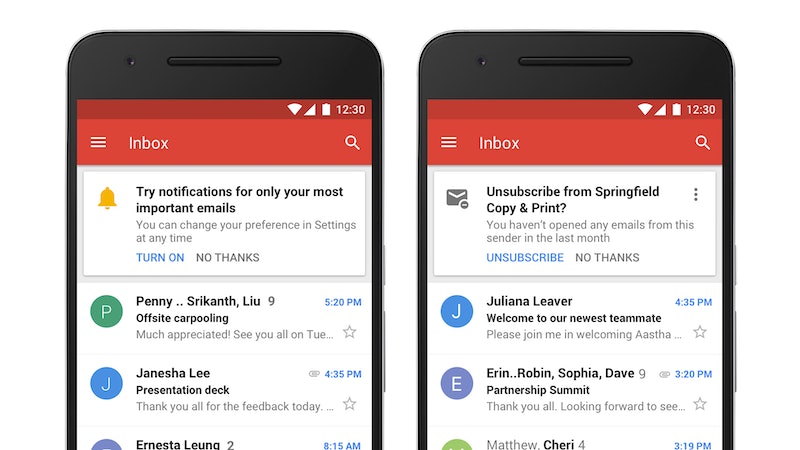 If I want to feel stressed, I'll open up my email. I'm bad at keeping up with emails to begin with, but I also keep four active email accounts. (Don't ask my why; I don't have an answer for you.) Keeping up with a garbage fire of unread emails on the daily usually leaves me feeling like I've made no progress, which is why I'm SO excited about the new Gmail features. On April 25, Google will be debuting its first major redesign of Gmail in almost a decade, and with the platform's new look will come a bevy of new tools, designed to make you your most productive self.

A Google representative shared with Bustle that the email platform's new features will include things like confidential mode, which lets you set a 2-factor authentication code to open an email and even set a date for the email to self-destruct, and offline mode, which lets you get sh*t done while you're away from wifi — say, if you're on a plane or you don't have enough data left to turn on your personal hotspot. Gmail is already widely-beloved for its simplicity and functionality, so it's exciting to see that even more improvements are coming to the popular app.

The one feature I'm *particularly* hyped about, though, is the side panel, which allows people like me who suck at multitasking to give it a shot. Essentially, you'll be able to read your email sand also view Google Tasks, Keep, and Calendar at the same time. Because it's all in one screen, you'll be less overwhelmed than you would if you had separate tabs open for each app. So, if you're trying to send a cal invite over to someone, you won't have to keep clicking back and forth to make sure you got the date, location, and time correct, not to mention spelled the invitee's email right. (Is this a problem for anyone else? Because it sure as heck is an issue for me.) Speaking of streamlining, the design refresh will also allow you to access your attachments directly from your inbox, rather than clicking into a thread and searching for the right email where the attachment was originally sent. I don't know if there's much hope for me and fellow easily-stressed people when it comes to being more productive with my email habits, but I'm definitely giving it a shot.

Even if you already have multitasking down, Google's new features have something for everyone. You can "snooze" messages just like you'd snooze an alarm, and they'll pop into your inbox at a more convenient time — perfect for people who use the *super* foolproof system of reading and email, then marking it unread so you remember to deal with it later (ahem). There's also a "nudge" feature for those very same folks, which will gently remind you to respond to emails if you haven't responded in several days. Google is giving us no reasons to tell someone we accidentally overlooked their email, and I'm here for it. Mobile Gmail users will also be able to opt in to high-priority notifications, which will only notify you of emails from people you correspond with frequently. In a press release sent to Bustle, Google says it could reduce notifications by as much as 97 percent (extremely yes).

Google also wants to save you time by implementing "smart reply," which uses AI and predicative text to suggest possible answers to simple emails based on previous interactions. This feature is already available on the mobile app, but web-based users will be able to take advantage of it, too. On mobile, Google will also suggest when to unsubscribe from newsletters or mailers and offer an in-app tool to do so, which can help you clear the clutter from your inbox while on the go. And, for the security-minded of us, Google has also redesigned its phishing scam warning, making it easier to spot whether an email has been flagged for being sketchy.

The Gmail refresh is exciting for many users who've come to know and love Gmail's existing features. Now, we get to see how much more productive we can get — all while using the same inbox we know and love.