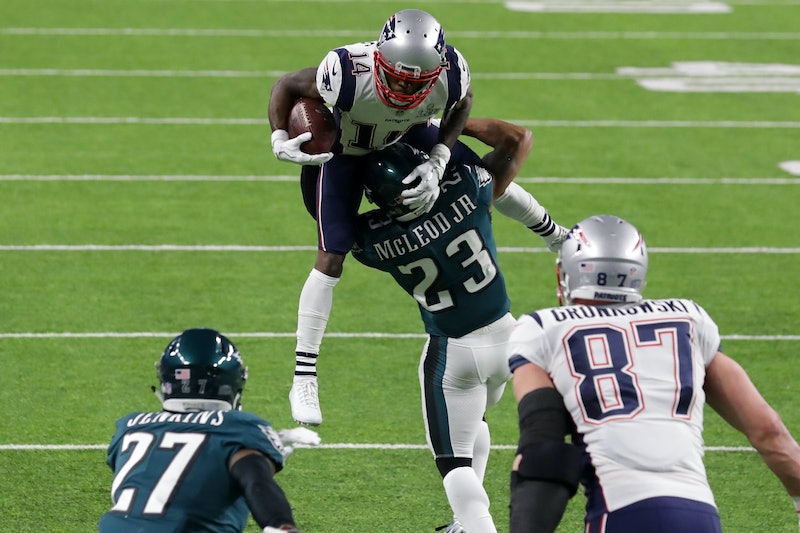 Early in the second quarter of Super Bowl LII, Philadelphia Eagles defensive back Malcolm Jenkins slammed into New England Patriots wideout Brandin Cooks with enough force that the receiver had to be pulled from the game due to a head injury. Their teeth-jarring hit was a good reminder of just how brutal the sport can be on players' bodies and brains and why the NFL has concussion protocol. As awareness about the long-term effects concussions can have on a player's health has increased over the years, so too have the NFL's efforts to protect players.

After years of downplaying the long-term risks of concussions, the NFL implemented a concussion protocol in 2009, which it has continued to adjust and tweak over the years. The NFL's rules for concussions include protocol on how to immediately respond to suspected concussions as well as return-to-participation rules.

According to SB Nation, the NFL's concussion protocol dictates a player be immediately removed from the field following a hit or collision that could have resulted in a concussion. An NFL team physician and an unaffiliated neurotrauma consultant then review footage of the play and conduct a focused neurological exam on the player on the sidelines. Under the Madden Rule, a player is taken to the locker room for further assessment if a concussion is suspected. If the player is ultimately not diagnosed with a concussion they can return to the game, where they are monitored for symptoms throughout the rest of the game. However, if a concussion is diagnosed, the player is barred from a same-day return to the field.

Under the NFL's concussion protocol, returning to the game isn't quite as easy as a player saying, "put me in coach." The NFL's return-to-participation protocol is a five-step process that includes a period of rest, monitored light aerobic exercise, supervised strength training, non-contact football activities, and then finally, clearance for full participation in practice. While the NFL outlines the steps required for a return-to-play, the league has noted that recovery time can vary from player to player and injury to injury and therefore there is no set timeframe imposed on players.

"Each player and each concussion is unique," the NFL stated in return-to-participation protocol dated June 2017. "Therefore, there is no set time-frame for return to participation or for the progression through the steps of the graduated exercise program set forth below. Recovery time will vary from player to player."

Recently, the league also moved to introduce rules designed to increase teams' enforcement of concussion protocol. Under the new rule any team that failed to properly enforce any or all parts of the league's concussion protocol can be fined or forced to forfeit its draft picks, according to SB Nation.

But not everyone is a fan of the NFL's new concussion rules. President Donald Trump, for example, has accused the league of "ruining the game" with rules regarding concussions. While speaking at a campaign rally in Florida in October of 2016, Trump characterized concussions as "a little ding on the head" and bemoaned the new NFL protocol as "soft."

However, even with the NFL's concussion protocol, football remains a rough sport where the risk of injury can be high. Earlier this year, the league revealed an uptick in the number of concussions sustained during the preseason and regular season. The NFL saw a total of 281 concussions during the 2017 season, the highest seen since the league first released data on concussions in 2012.

In an effort to ensure players' safety during Super Bowl LII, the NFL brought in four independent concussion specialists to monitor play on the sidelines of the big game. And given what the medical community now knows about the health risks associated with repeated head injuries, it's safe to say those concussion specialists — and the NFL's concussion protocol — play a vital role in making the game just a tad safer.