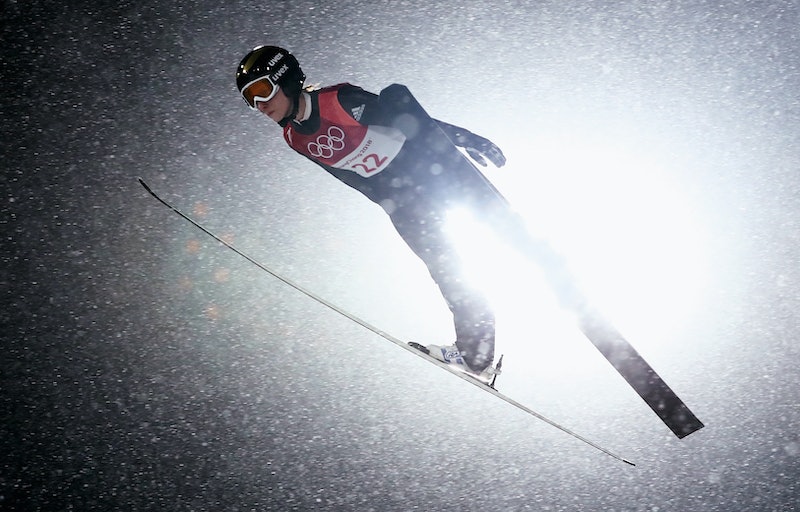 The Winter Olympics are in full swing, meaning athletes are racing, jumping, twirling, and curling their way through a ton of different sporting events that you may not be completely familiar with. If you're more of a Summer Olympics fan, or have never set foot on so much as a bunny slope, you might find yourself in desperate need of an Olympic skiing explainer. The different types of Olympic skiing break down into six categories.

Athletes at the 2018 PyeongChang Games will compete in 15 winter sports. Like the Summer Games, the Winter Olympics are a showcase of speed, power, agility, and gravity-defying moves. And skiing, which accounts for six of the 15 sporting events on display in South Korea, is no exception.

But not all skiing events are the same, nor do they require the same set of skills or talents. While freestyle skiing sees athletes performing acrobatics in mid-air, alpine skiing requires a fearless need for speed. Then there's ski jumping, which is more about going the distance — literally. Not to mention the feat of athleticism that is biathlon, a sport seemingly made just for James Bond himself.

With competitors regularly reaching speeds of 90 to 100 miles per hour, alpine skiing is a sport for snow-loving speed demons. But while the events are all decided by time — the fastest to the bottom wins — victory isn't just a matter of being quick. The events also require a tremendous amount of technical skill.

In fact, the six alpine skiing events are divided into speed events, like the downhill and super G, and technical events, including the slalom and giant slalom. There's also a separate combined event and a team event. With the exception of the 1940 Games, alpine skiing has been an Olympic sport since 1936.

In biathlon, athletes combine cross-country skiing with rifle shooting. Competitors race around a closed course set with various intervals requiring them to stop, drop, and shoot five targets set 50 meters away before racing on. Every missed shot results in a penalty: a one-minute delay for individual events and skiing a 150 meter loop for other events, according to the BBC.

You've probably heard of cross-country skiing. Although the sport was originally just a practical means of traveling in cold, snowy places, it's evolved into both a recreational activity and a competitive sport.

While the sport certainly tests athletes' strength and endurance, winning is simple: just cross the finish line first. That being said, not everyone uses the same technique. According to CNN, cross-country skiers employ either a classic technique of forward strides along pre-set parallel tracks, or a freestyle technique of a side-to-side motion to propel themselves forward. There are seven events within cross country at the 2018 Winter Games, including long-haul races like the men's 50-kilometer and the women's 30-kilometer and short dashes like the men and women's 1.5-kilometer sprints.

In freestyle skiing, competitors gather as much speed as they can before jumping hundreds of feet into the air to perform aerial acrobatics. At the Olympics, freestyle skiing boasts 5 different events: aerials, moguls, ski cross, ski halfpipe, and ski slopestyle.

All of those events, with the exception of ski cross, which is timed, have judges. Competitors are evaluated based on execution, height, difficulty, variety, and landing. In aerials, athletes aim to complete difficult gravity-defying flips and twists. In moguls, they race a course dotted with mounds of snow (those are moguls) on which they must complete technical aerial maneuvers.

Nordic combined is one of the oldest events in the Winter Olympics, having been included in the very first Winter Games held in 1924. It combines cross-country skiing with ski jumping and requires significant stamina and technical skill.

Judging the three nordic combined events is a bit tricky. The ski jumping portion, in which the events are known as normal hill and large hill, are scored using a point system. But the corresponding cross-country portions are scored based on time instead, and judges use what's known as the Gundersen Method to determine the winner. Nordic combined is also a unique Olympic sport in that it is a men's only competition. Women are prohibited from competing, at least for now.

In ski jumping, competitors hurl themselves from sloped ramps at speeds of about 50-55 mph to see who can go the farthest. There are no fancy tricks here. Athletes stay low as they ski down a sloped ramp, before pushing off from the end of the ramp with their legs. The event is judged based on the competitors' style, landing, and flying. Points are deducted if an athlete falls short of reaching the K-point, a target drawn in the landing area.

While high winds at Yongpyong Alpine Center caused many of the skiing events of the 2018 Winter Games to be postponed or cancelled on Monday, improved weather is in the forecast for the coming days. That means there's still plenty of time to revel in the thrills of Olympic skiing.