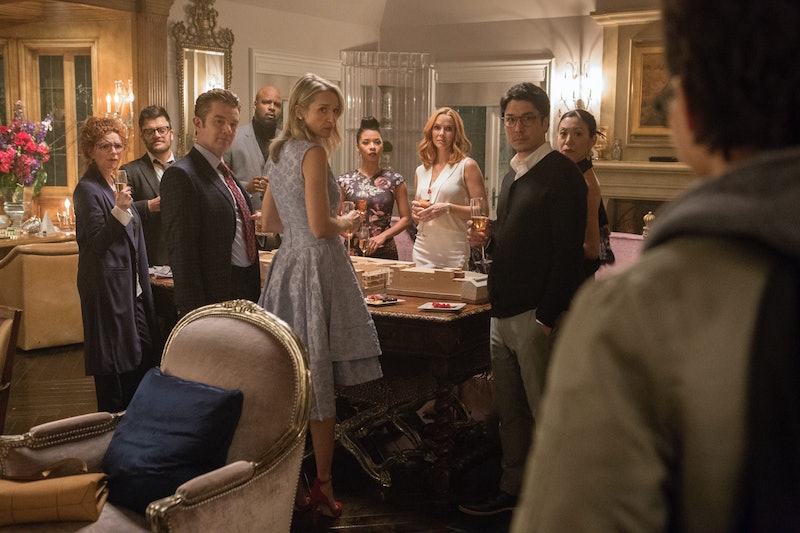 Most teenager have moments when they don't get along with their parents, but most of those adults probably don't have world domination in mind. What are the parents doing on Runaways? Gert, Nico, Chase, Karolina, Molly, and Alex learn in the Hulu series that the people who are raising them have also been keeping some big and dangerous secrets.

Those secrets seem to center around the Pride, an elite secret society which includes all of the core six Runaways parents. While it's unclear from the trailer exactly what evil deeds the Runaways parents have undertaken, the comics hold all the answers. Obviously, if you haven’t read the Runaways comic book series, spoilers are ahead.

In the comics, the Pride have an understanding with the Gibborim, who are an ancient, alien group of six-fingered, giant beings who want nothing more than to see humanity be eradicated from planet Earth. The Gibborim summoned together six couples promising that if they would help the Gibborim, six of the individuals would survive humanity’s extinction and be able to rule the newly cleansed Earth. These aliens then gifted all of the villains' with super powers and granted them wealth while they were in their service. (Which is why all the Runaways are so well off.) Every year there is a ritual of sacrifice (called “The Rite of Blood”) performed on an innocent whose spirit would be consumed by the giant beings ( aka “The Rite of Thunder”). However, after years of doing this without interruption, the Pride are discovered one year in the process of the sacrifice by their children.

Co-creators Josh Schwartz and Stephanie Savage will stray some from the source material. But that’s a good thing, because according to one of the actors on the show, that means more time to develop the Pride. Ryan Sands, who plays Geoffery Wilder, told ComicBook.com that the Pride are well-developed, with their motivations fully explained. He said:

“I'm excited for fans to see the Pride fleshed out. Yeah, that sounds like I'm biased because I'm a Pride member, but the truth of the matter, we really expose and display who these people are a lot more than they were presented in the book. There's only so much you can do in those pages, and in those volumes. The story undoubtedly, it's about this group of kids, but in the show, there's a lot of time spent with the Pride. And you see why certain decisions were made, you really see the effect of those decisions, the toll that the decisions make on us.”

With these changes, Runaways seems to fit particularly well in 2017. Deadline reported that Schwartz was asked about the show’s political overtones at the Runaways TCA panel. And the producer also sees the relevancy of the story to this particular moment in American history.

“This is a time when figures of authority are in question,” he said, per Deadline. “This is a story where teenagers are at that age where they see their parents as fallible and human. Just because someone is in charge, doesn’t mean that they’re here to do good.”

With young people being called on to lead the resistance, this theme is likely to resonate. So, while yes, this may be a show about teens, it's their relationship to their parents and their parents' actions that will be most interesting. For each of those parents to hide such power, knowledge, and evil intentions from their children is more than a little creepy. And there's still so much mystery surrounding the Pride, the Gibborim, and exactly how the partnership plan on destroying humanity. But all should be revealed as Runaways continues.