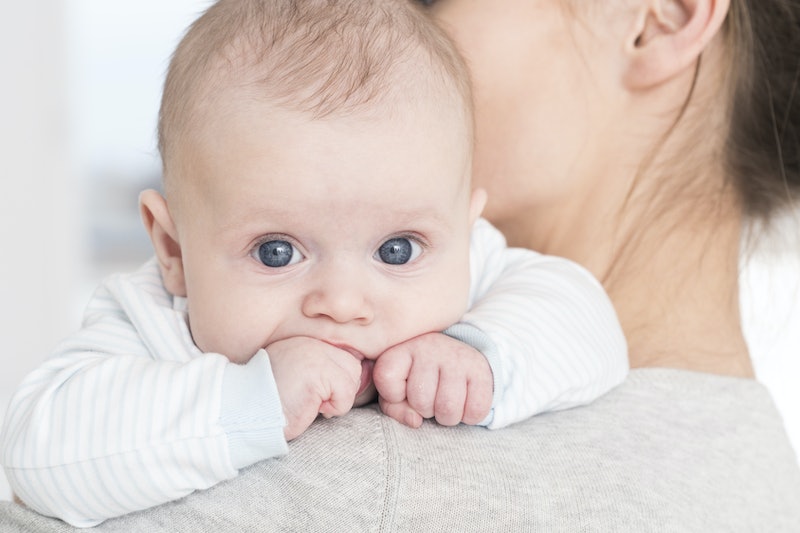 Every year, Nameberry tells us the most (and least) popular baby names of the year; and the most popular baby names for 2017 have brought us a few surprises. While some of the names are more traditional or have appeared on the top 10 lists for years, other monikers are shaking things up. Chalk it up to parents' boredom with the usual names. Chalk it up to celebrities naming their kids Pilot Inspektor and Zolten. All we know is that people are starting to get even more creative — and I dig it.

Many of the baby names are repeats from previous years. Olivia came in as the top pick for girls this year, as it did in 2016 (and it came in fourth in 2015). Charlotte is another favorite pick, coming in at fourth this year, third in 2016, and first in 2015 — seemingly falling in popularity, although it's a gorgeous name.

The boys' names tell a similar story. Asher, for instance, has remained in second place for the last couple of years, with Milo and Oliver being two more winners.

The Top 10 Most Popular Names for Girls

The Top 10 Most Popular Names for Boys

While Olivia wasn't exactly groundbreaking (since it came in first last year), Atticus for the boys was an interesting turn of events. In 2016, it sat at fourth, behind Declan, Asher, and finally, Ezra in first.

Of course, Atticus has had its own place in history, aside from the baby names lists. It was likely made famous by author Harper Lee, when she used the name Atticus Finch for the protagonist of her hit 1960 novel, To Kill a Mockingbird. In creating the character, she modeled him after her own father, who she loved and admired greatly. The name itself was taken from Titus Pomponius Atticus, a Roman citizen and close friend of the philosopher Cicero. Titus gave himself the nickname "Atticus" out of his love for the city of Athens. He was known for his taste, intellect, wisdom, and humanity. A beautiful name for a baby boy, indeed.

Ironically, there was some concern for Atticus a couple years back, when Lee's book Go Set a Watchman was released, and discussion opened up about Atticus as a racist. It clearly hasn't stopped parents from naming there little bundles of joy after the infamous character, though, as Atticus remains strong at the top of the list.

And if there's a top of the list, there's also the bottom. Earlier this year, Baby Centre released their list of "endangered" baby names — meaning the least popular, although I think some of them are pretty darn cute. For the girls, Cynthia, Bonnie, Gail, and Karen made the list. Bad news for me, considering I was planning on naming my future daughter Cynthia Gail Grant. For the boys, some of the least popular names included Ricky, Frank, Clive, and Roald.

Not that you need the reminder (I hope), but when it comes to naming your child, the only rules you should follow are your own. Trends and popularity — and unpopularity — aside, if it speaks to you and you love the meaning, then do your thang.

More like this
You Can Save Up To 40% Off On TikTok’s Favorite Products This Black Friday
By Kristine Fellizar and Alexis Morillo
How To Use TikTok’s Voice Filters To Sound Like A Cat, Robot, & More
By Alexis Morillo
How The Thanksgiving Episode Of 'Gossip Girl' Changed Pop Culture History
By Gabrielle Bondi
Heinz Just Relaunched A Bean-Tastic '90s Fave
By Sam Ramsden
Get Even More From Bustle — Sign Up For The Newsletter