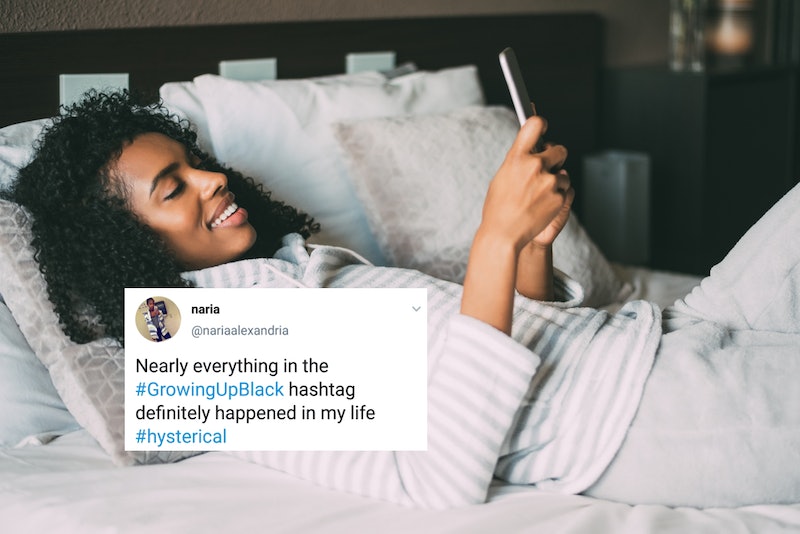 That original question was posed when Choire Sicha, who is white, wrote a post for The Awl on what he called his “obsession with Late Night Black People Twitter.” Though Black Twitter didn’t begin with Sicha’s post, he has been more or less credited with coining the term “Black Twitter,” an online space of Black people dedicated to creating Black culture, discussing Black issues, and creating a safe place for Black people to share their identities, validate their experiences, and cheer one another on.

And it’s within these hashtags that Black Twitter truly comes alive, a place where jokes double as affirmative displays of identity.

What it means to share a community of Blackness is seen in hashtags many have never heard of like #GrowingUpBlack and #ThanksgivingWithBlackFamilies. #GrowingUpBlack is a heartwarming hashtag that describes common situations growing up, often referencing things our families told us to shut us down. Think: “I’m not one of your little friends” or “You got McDonald’s money?” The joy of these hashtags is the realization that it’s not just your mom who says these things: It’s many, many, many Black moms.

These threads absorb the nuance there needs to be when talking about capital B “Black People.” There is no one type of Blackness on Black Twitter (or in real life), but there is an underlying shared experience of what it is to be Black. Those shared experiences aren’t always pleasant, but having a community at the ready to share those experiences with, especially when you may not have that community in your real life, provides a place of comfort.

I asked 88 people, Black and non-Black, about their relationship with Black Twitter through a survey and personal interviews to see if everyone saw Black Twitter as the same joyous online community I saw it as. I was more surprised than I should have been to learn that racial identity influences interactions online just as much as they influence interactions offline. What I found was that Black people often considered themselves to be “members” of Black Twitter just because they were Black. In fact, Black people who didn’t even use Twitter still considered themselves to be members of Black Twitter.

“I consider myself a member of Black Twitter because I am Black of course, and I follow mostly Black people,” one survey respondent said. “I participate because it is an amazing source of entertainment.”

But people who didn’t identify as Black often felt like they couldn’t be, or shouldn’t be members of Black Twitter.

"Even if I were on Twitter, followed people of color, and retweeted ‘Black Twitter’ tweets, I would still not be a member of Black Twitter,” another respondent said. “It's social media, which means anyone can observe, participate, or become involved, but as a white person, it's just not my space. It does not belong to me." Another respondent echoed this sentiment. “To me, I have no place in influencing it.”

Unpacking these responses was a lot to think about, because after all, it is just Twitter. Even in online communities like Twitter, it is our natural tendency to stay within groups that look like us, and it takes a conscious effort to break this unconscious racial bias. Online or off, Black Twitter or elsewhere, the choice to not participate in Black spaces is just that: a choice. It’s easy to think about Black Twitter as some impenetrable community of Black people. But when non-Black people start thinking that way about Black people online, we start thinking that way about Black people offline — continuing to make choices to avoid these spaces. Whether conscious or not, non-Black perceptions, fascinations, and misunderstandings of what Black Twitter is stems from discomfort and stigma concerning Black spaces, and what Black people do in these spaces.

But the solution isn’t that non-Black people can’t participate in Black Twitter. Allyship is far less about staying out of spaces “not for you” and much more about understanding your role as a guest. Being a non-Black person on Black Twitter, or in real life, means you won’t always understand what’s going on, it won’t always be your place to voice an opinion, and when you do voice an opinion, displays of allyship won’t be rewarded. Black Twitter isn’t about creating space for white comfort; it is about breaking down unconscious and conscious displays of white supremacy and celebrating Blackness in a world that usually doesn’t.

And in some ways, maybe the power of Black Twitter is the visibility it can bring to those who otherwise don’t find themselves in Black spaces. The problem is that Black lives should be visible offline. At the end of the day, Black Twitter is just Twitter. Everyone should be a part of the Black Twitter party if not for any other reason than that it’s fun.