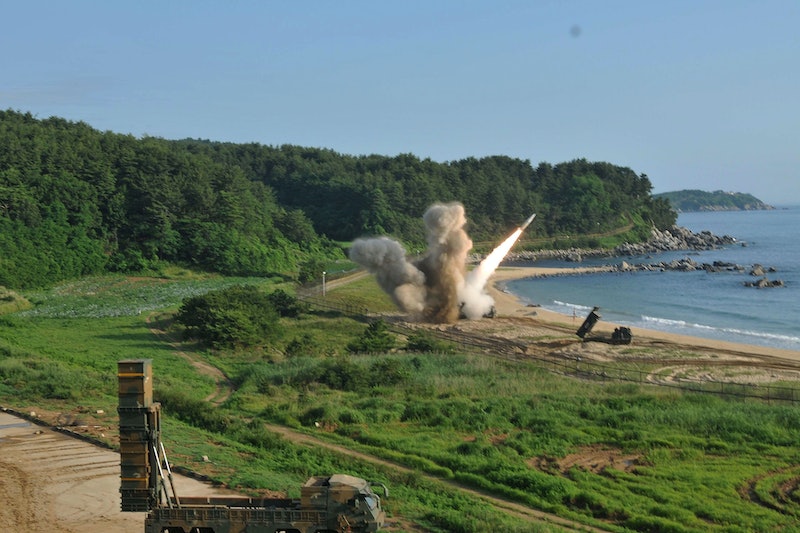 The U.S. and North Korea have been trading threats in recent weeks, leading to a growing suspicion that a war between the two countries may be brewing. Naturally, this has a lot of people wondering exactly what kind of bombs North Korea has, and whether the country is likely to use them on the U.S..

The most immediate fear, of course, is nuclear weapons, North Korea's got 'em: The hermit kingdom has conducted five nuclear tests as of this writing, and in 2016, the government released a picture of North Korean leader Kim Jong-un next to what appeared to be a miniaturized nuclear warhead. Although it's impossible to say exactly how many weapons comprise country's nuclear stockpile, a Stanford professor and North Korea expert who's toured the country's nuclear facilities estimated that by the end of 2016, the country had somewhere around 20 nuclear bombs.

But despite the attention given to nuclear warheads, they're not the only weapons of mass destruction that North Korea possesses. According to estimates from South Korean and American intelligence agencies, the country also has thousands of tons of chemical weapons as well, one variety of which — VX — was used to assassinate Kim's half-brother in February. North Korea is also believed to possess the ability to create biological weapons, including anthrax, smallpox, and cholera.

In short: North Korea has a lot of bombs. Whether it has any intention of using them is another question entirely, however.

The U.S. and North Korea have never been on friendly terms, and it's not at all unusual for a North Korean leader to threaten to turn America — or an American ally in the region, such as South Korea or Japan — into a "sea of fire." Kim has made such threats many, many times since taking office in 2011; at one point in 2013, he even warned that North Korea might nuke Austin, Texas.

Needless to say, though, he's never once followed through on any of these threats. This is most likely because, according to North Korea observers, Kim's true goal in issuing these warnings is shore up support within his own country. To the extent that North Korea has a national myth, it's based largely on demonizing the U.S. and its allies; depicting America as such a big threat that it might have to be nuked is a great way of reinforcing that idea. Furthermore, acquiring a stockpile of nuclear weapons is an excellent way of dissuading other countries from attacking you, a fate that North Korea has had some experience with in the past.

None of this is to say that North Korea isn't a serious danger. It undoubtedly is, and if American leaders have any good options for defusing the situation, they certainly haven't figured out what those options are yet. But just because a country has a frightening stockpile of deadly weapons, that doesn't mean it's planning on using them.